“I have written to Paine.  I wonder if you have your Morris Chair and if the cushions are high and fit well.” Sara Roosevelt to Franklin, October 8, 1900 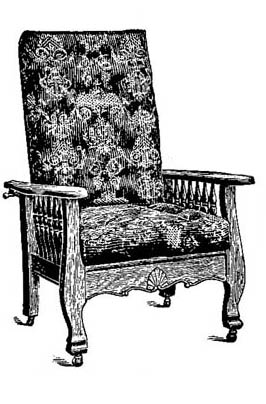 A period ad for an American Morris Chair

Mention the term “Morris Chair” to the average person these days, and chances are you’ll draw a blank stare. But a hundred years ago, everyone would have known precisely what you meant;  by 1900 the Morris chair had become the preferred type of easy chair for sitting in formal parlors or for relaxing in front of the fire. The FDR Suite, in fact, had two: one for Franklin, and one for Lathrop Brown, his roommate.

My name is Lary Shaffer, and I have the pleasure of being the craftsman selected by Michael Weishan of the FDR Suite Foundation to reproduce two Morris chairs for the Restoration. Michael’s brief to me was simple: build two chairs of slightly varying designs that were historically accurate while at the same time able to stand the wear and tear of modern use. Not surprisingly, this produced a considerable amount of back and forth, and we both thought it would interest you to learn how I go about recreating a bit of furniture history.

First though, a little background:

The Morris chair derived from an example discovered about 1866 by Warrington Taylor at the country workshop of Ephraim Coleman in Sussex, England. Taylor was an administrator at Morris and Co., a firm founded by the famous designer William Morris, whose Arts and Crafts aesthetic derived its inspiration from the forms found in nature. Morris very much looked down on what he considered to be an excess of Victorian adornment, and above all espoused “honest” (meaning hand) craftsmanship over industrial production. The chair Taylor found in Sussex must have fit this bill precisely, as he was impressed enough to recommend that a similar piece be included in his company’s furniture line.  His hunch proved correct; the version of this chair produced by Morris  and Co. was soon wildly successful, in fact so successful that it was widely copied and adapted both in Britain and North America.  The prototypical Morris chair has a wooden frame with little or no applied upholstery and loose boxy seat and back cushions.  Its defining characteristic is a reclining back.  Most often the back reclined against a bar that could be placed in four or five different positions.

It is likely that hundreds of thousands of Morris chairs were made in America from about 1890 to 1930.  The Paine Furniture Company from which Sara Roosevelt obtained FDR’s Harvard Morris chair operated an expansive store in Boston.  They manufactured some furniture but also sold a vast array of furniture from all over the world. They probably carried many different designs of the Morris chair. 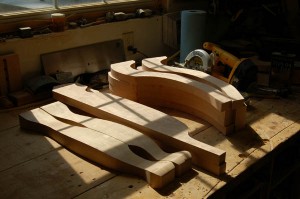 I have been making Morris chairs in my Maine workshop for seven years, continually improving a basic design that I derived from the measuring many original chairs.  I found that most antique Morris chairs fall within a few inches of each other, even though they were made by many different makers.  I use the arithmetic mean of those measurements as the design base for the Morris chair I make.  The result is a seat that is very comfortable for most people.  Even though the two chairs for the FDR Suite will be quite dissimilar to represent the different ownership of the originals (Lathrop presumably bought his own chair from a different source) they will both have these antique measurements in their basic structures. One of the chairs will be quarter-sawn white oak and the other will be black walnut. 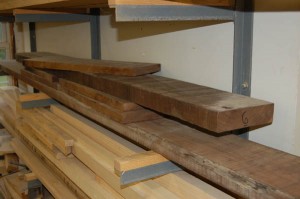 For months I have been looking for the kind of beautiful boards that should be used to build these chairs.  All of the wood I purchase is appropriately dry and rough-sawn.  Initially I lay out the major parts of the chair by sketching them on the wood, paying particular attention to the grain and color match of the wood.  I plane two sides of the boards so that they have a square edge and then let them sit around for a few days to permit them to bend and twist if that’s what they want to do.  I then plane the boards again to touch up the square edges.  If these edges remains square, then a few days later I will square and flatten the other sides of the boards. 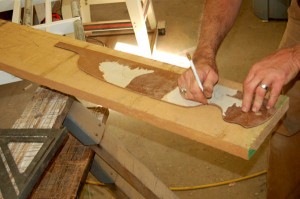 Seven different thicknesses of wood are required for each Morris chair.  Once the appropriate thicknesses and widths are achieved, I mark and cut the mortises and tenons that will hold the main frame together.  Next, I trace non-linear shapes from patterns, and saw them on a bandsaw to eliminate as much scrap as possible.  I finish them on a high speed shaper, clamped into a jig that assures the correctness of the final shape. 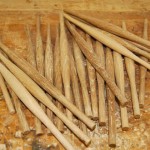 I make the side spindles for the chair by hand on a small lathe.  With lots of practice and a full-scale outline as a reference, I have found that I can produce sets of spindles by eye that appear to be identical. 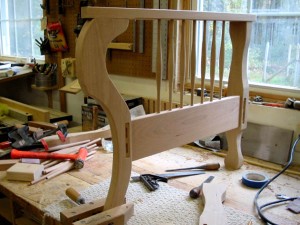 Once the parts are formed and sanded, I dryfit the chair: that is, I assemble it without glue.  I check every joint to be sure that it fits tightly.  I wish I could say that everything always goes together perfectly but, in fact, various fittings often need a minor shave or other adjustment.  Once a satisfactory dryfit has been achieved, I take the chair apart and reassembled it with glue.  One side of a chair has eleven separate parts.  The assembly of a side requires me to focus and, at the same time, scamper because woodworking glue begins to set within a few minutes.  Gluing a chair side is the most difficult part of building a chair.

Next, I install the hardware allowing the entire chair frame to be set up for the first time.  Following this, I wipe the wood with multiple coats of linseed oil and rub it down with very fine steel wool between coats.  This time-tested finish produces a deep satin sheen that wears very well and, in the event of damage, is easy to repair.  A coat of paste wax can add gloss to the satin finish if desired. 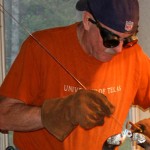 I forge the hardware for my Morris chairs myself, using rather primitive blacksmith methods.  The hinges that permit the back to recline are of a special configuration that I believe is only found on Morris chairs. They resemble a miniaturized pin-and-eye gate hinge and permit the chair back to function like a gate, enabling it to swing freely over a very wide angle.  I also make the steel bar against which the back rests. 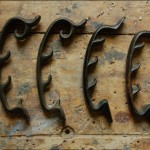 This bar is supported on hooks by two metal brackets. I normally make these hooked brackets for my chairs. However, in order to preserve the historical appearance of the FDR chairs I salvaged brackets from two antique chairs that were damaged beyond redemption. 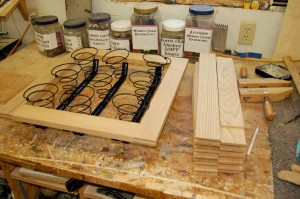 The cushions of the FDR chairs will be covered with fabric appropriate to the period, and chosen to blend with the decor of the FDR study as Sara no doubt would have seen to, as she helped select the furnishings of her son’s Harvard suite.  (Though you often see modern Morris chairs covered in leather, that’s not at all  correct for this period.) The seat cushion of each chair rests upon coil springs that I build into a rigid oak frame and hand tie eight ways.  The springs are covered with several layers of bonded Dacron and a top cover of denim decking material.  The cushions are filled with down that is pillowed around a soft foam core.  These cushions hold their shape and I believe that they closely approximate the seat-feel of a new Morris chair in 1900.   Of course, I want to be certain that Sara’s desires are met and that “the cushions are high and fit well.” 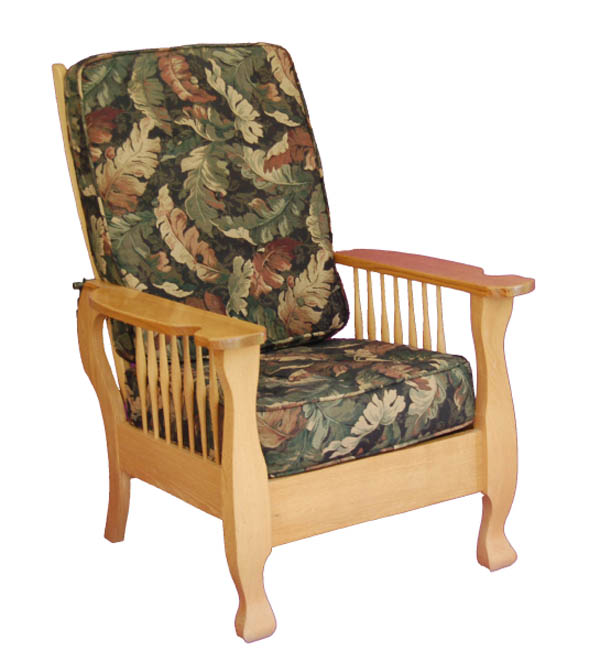 A white oak chair in my shop ready to ship. The two FDR Suite Chairs should be ready in December.

2 comments on “A Tale of Two Morris Chairs”