At the beginning of his presidency Franklin Delano Roosevelt stated that “The definite policy of the United States from now on is one opposed to armed intervention.” By the end of his third term the US was fully involved in World War II. While many factors, including the rise of the Nazi party and an attack on US soil, attributed to this shift, it shows the range of policies and situations with which US leaders must interact. Since WWII the US has created and utilized a wide range of elite organizations to accomplish missions, both in and out of combat. This chat will provide a general overview of the Special Operations community and personal lessons learned from an Army Special Forces leader.

port of Operation Freedom Sentinel / Resolute Support.  Additionally, he has worked as a Strategist and Strategic Planner at the US Special Operations Command and the Joint Special Operations Command.  He has deployed numerous times to Afghanistan and Iraq serving as a Special Forces Operational Detachment – Alpha Commander, Special Forces Company Commander, Special Forces Battalion Commander and Future Operations Planner with the Special Operations Joint Task Force – Afghanistan.  Kevin holds a bachelor’s degree in international studies from the Virginia Military Institute and a master’s degree in defense analysis from the Naval Postgraduate School.  His research interests include defense readiness, national security and special operations in South and Central Asian states.


It was during a fireside chat that Franklin Delano Roosevelt urged the American people that “we must have more ships, more guns, more plans—more of everything. We must be the great arsenal of democracy.” These words sparked debate over America’s role in the world. A debate that still rages in the United States today, and is intensified by rapid increases in the technology of war. 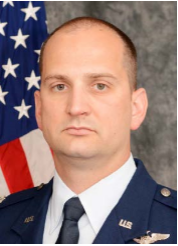 FDR made the above challenge to a group of advocates lobbying the him for change. Historians do not agree on the exact context in which this was said, but the message is clear. Everyone is responsible for advocating for change they want to see.

Throughout her career Allyson Maynard-Gibson has embodied this challenge laid out by FDR. As a long-time advocate for women and children she has been at the forefront of social change. As financial services minister and attorney general of the Bahamas she was faced with systemic problems while in a position to encourage elected peers and leaders to institute sweeping reform. 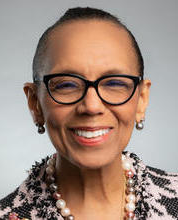 Allyson Maynard–Gibson served twice as attorney general and minister of legal affairs of the Commonwealth of The Bahamas. Ms. Maynard–Gibson also served in the Bahamian Parliament, was the country’s first minister of financial services and investments, and is past president of the International Women’s Forum and the Leadership Foundation.

How to Impact Change While Following Orders 10/22


“The country needs — and, unless I mistake its temper — the country demands bold, persistent experimentation. It is common sense to take a method and try it: If it fails, admit it frankly and try another. But above all, try something.”
—FRANKLIN D. ROOSEVELT

FDR’s quote above was a call to the American people to support systematic change to combat the Great Depression, but his words can be applied to leadership at every level in many situations. He challenged people to take action when the path forward was not clear. Meeting this challenge is  important in the military, in government, in start-ups, and the rest of the professional world.

One aspect of organizations that make meeting FDR’s challenge difficult is a consistent institutional dilemma: How does one lead, while following? How do you influence change, and conduct the experimentation FDR demanded while executing the strategic direction outlined by your boss, your company’s board, or your commanding officer?

Come hear Commander Jason Wells, US Naval Flight Officer, discuss stories and lessons about the challenges that accompany leading and following as a member of a mission driven organization, such as the United States Navy. 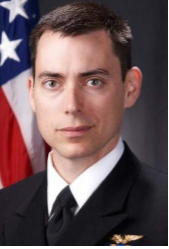 Commander Jason Wells is a Naval Flight Officer who was recently the Aviation Officer Community Manager at the Bureau of Naval Personnel, responsible for the personnel policies governing Aviation force structure.  Previously, he commanded Special Projects Patrol Squadron Two, flying in Iraq during Operation Inherent Resolve, as well as in other operations throughout Africa and the Pacific.  He also served as the Operations Officer of Fleet Air Reconnaissance Squadron One, conducting Intelligence, Surveillance, and Reconnaissance operations worldwide and flew in the NATO campaign over Libya during Operation Unified Protector. Has authored two DoD Electronic Warfare Assessments characterizing the strengths and weaknesses of Service capabilities throughout the electromagnetic spectrum.  Jason holds a master’s degree in international business from the University of Maryland, where he studied in Shanghai, and postgraduate research in Space Systems and Computer Science from the Naval Post Graduate School.  His research interests include strategic decision-making, force structure implications on strategy development, and mechanisms to characterize the constraints on national security and national defense strategies.

Posted on October 8, 2019 by Jarron Lord in Past Events


Franklin Delano Roosevelt’s presidency was defined by his reactions to crises in the United States and abroad such as the Dust Bowl which devastated the American West. Through projects such as the Civilian Conservation Corps, FDR displayed dedication to the environmental well-being of America and the world.

Come hear Charles Lin discuss current environmental efforts and hear about his experience with the Vancouver 2010 Winter Olympics, the air quality monitoring over the Alberta oil sands region, Canada’s participation in the Intergovernmental Panel on Climate Change, and the implications of climate change on disaster modeling and subsequent disaster response.

About the Speaker: Charles Lin is an environmental scientist who served as the director general of the atmospheric science and technology directorate within Environment & Climate Change Canada, a Canadian federal government department researching and monitoring weather, climate, and air quality. Mr. Lin also spent 20 years at McGill University in teaching and research positions, including heading McGill’s Environmental and Climate Change Centre.

Information and Influence in Sweden

Posted on October 1, 2019 by Jed Willard in Past Events

Part of the increasing pressure on Sweden comes in the form of insidious information campaigns, some originating within the country, some coming from right-wing political groups beyond Sweden’s borders, and some sponsored by antagonistic states.

Since 2016, the FDR Foundation has been honored to periodically work with the Swedish government on countering disinformation campaigns. Now we’re taking the work from Harvard to Stockholm, where four professors will work directly with Swedish decision makers and practitioners in November, 2019. We look forward to both being of assistance and to bringing our findings back to Harvard for further research