[For this this issue we’re delighted to have Pam Canfield Grossman, Lathrop Brown’s granddaughter, as guest author. – Eds.] 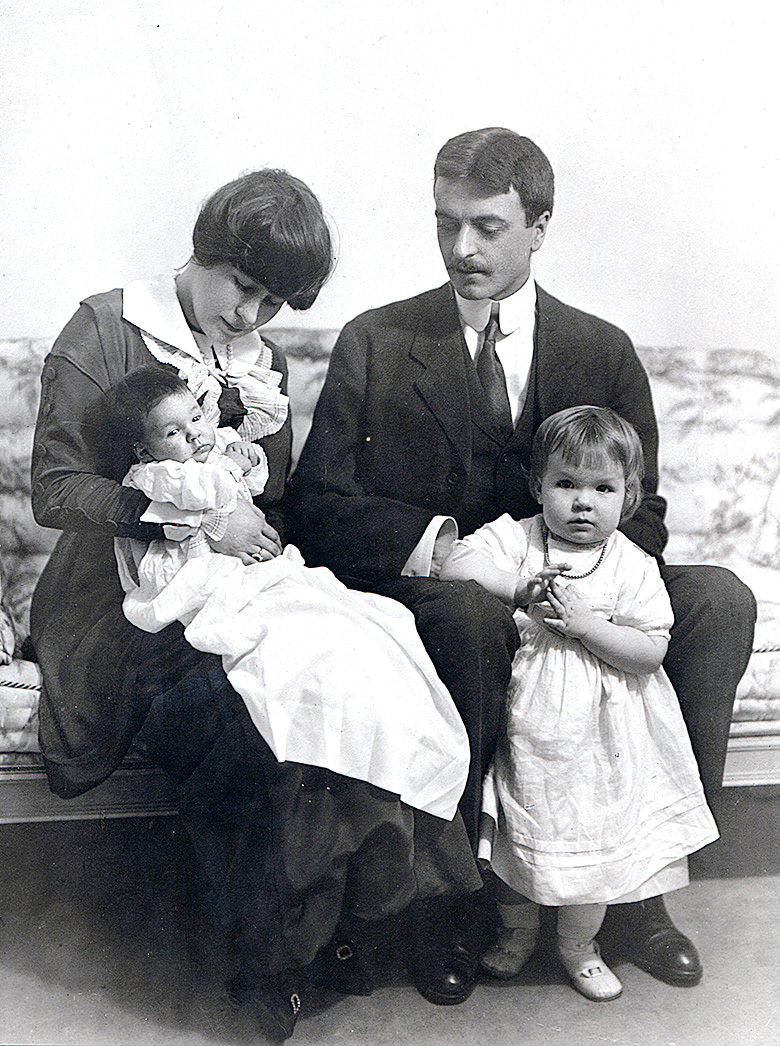 Questions about my grandfather Lathrop Brown and his life after Harvard keep surfacing in these pages, most recently concerning the Tin House at Big Sur. The life stories of Lathrop and Hélène Brown could practically be told as a succession of the houses in which they lived, nearly always at the edge of the continent. First on Long Island where Lathrop raised and raced horses [now the Knox School], then near the White House in Washington while Lathrop was in Congress and, later, when he was assistant to the Secretary of Interior. Afterwards they lived in Manhattan, then Montauk Point, and Boston. 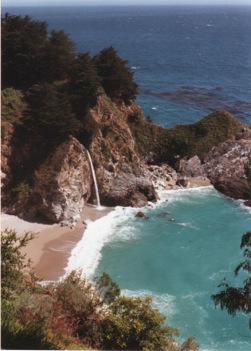 Saddle Rock and the Cove

In 1924 they traveled to Carmel, California in search of a secluded site at the ocean. On a horse and mule trip to the Big Sur area they found Saddle Rock Cove where a waterfall poured over the rocky bluff into the Pacific. They purchased the adjacent 1800 acre cattle ranch and began a bi-coastal life, maintaining a residence in Boston as well as Big Sur. 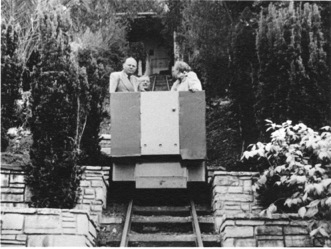 The old ranch house at Saddle Rock was soon replaced with a new house built using the local redwood trees.  Electrical power was supplied by a waterwheel driven by the stream. In 1939 construction began on Waterfall House. Sited halfway down the cliffs from the newly built highway above and reached by a short funicular railway, it was a beautiful contemporary building, with gardens around the house and across Saddle Rock cove. 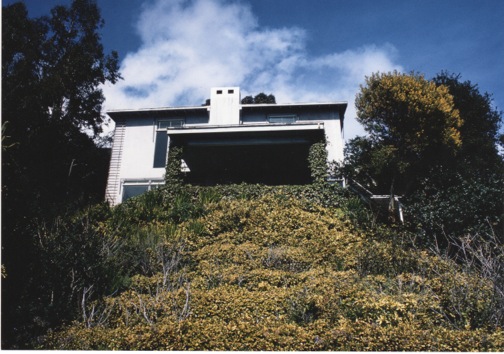 Waterfall House from the West

The Tin House, which the family called the Gas Station, was built in the mid 1940s high on the hills above Saddle Rock cove. It could only be reached by a rough dirt road climbing steeply up through the ranch to a bluff overlooking the ocean.

The house was actually constructed of materials from two abandoned gas stations and, oddly, had no windows facing the spectacular view. I have no idea why my grandparents built it. 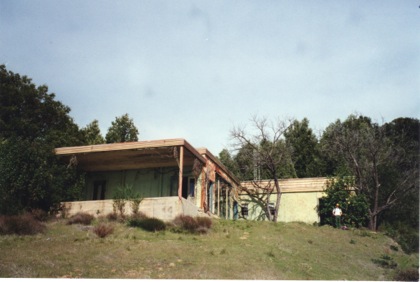 The story that it was to be some sort of vacation retreat for FDR is pure fabrication. It was a small, primitive, and nearly inaccessible place, wholly unsuited to a wheelchair bound president. It has now fallen into total disrepair.

When Lathrop died in 1959, my grandmother left Big Sur and gave the ranch and the house to the state of California as the Julia Pfeiffer Burns State Park. She wanted the house to be used as a museum and a center for local artists, and insisted that the house be destroyed if that was not possible. When funds for that purpose could not be found the house was bulldozed into the ocean below.

[There was one last amazing Brown housing project: at the time of Lathrop’s death, the Browns were in the process of converting a former Mississippi paddle boat into a winter home on Sanibel Island, Florida. It was never completed. For more on Lathrop’s fascinating life, see HERE – Eds] 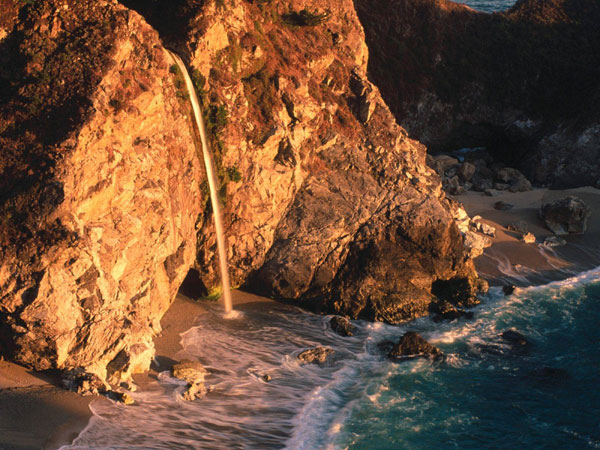 Long before I had ever heard of the FDR Suite, I’d visited an absolutely spectacular spot on California’s coast. Located along Highway 1, just south of Big Sur, the Julia Pfeiffer Burns State Park boasts some of the most beautiful scenery in the nation. Face westward, and thousand foot cliffs drop off into churning blue seas, while behind you, redwood forests rise pacifically into the mountains. There’s even a waterfall, where a small stream catapults off the rock and onto the beach hundreds of feet below.  It’s a perfect place to hike, picnic, or simply admire nature’s majesty.

The site is also interesting to history buffs. Home to some of the area’s earliest settlers, the land for the park was donated by a family who’d bought and ranched the property, building a series of successively grander houses perched on a point overlooking the ocean starting in the 1920s. The construction effort must have been nothing short of monumental: there was no Highway 1 at the time, nor anchorage in the rocky harbor. All supplies had to come over the mountains on mule train or unpaved track. By my day, the house was no longer extant – it had been bulldozed into the sea in the 60s when the State of California lacked funds to turn it into a museum – but bits and pieces of the gardens still remained, strange exotics poking through native coastal plants. An intrepid visitor can still sit where the grand old terrace once was, and on a clear day watch a vermillion sun sink through a mauve sky into a slate gray pacific. It’s a truly magical spot, majestically mournful, with a very special allure I’ve always felt keenly. Each time I was in the area, I made sure to find a few hours to wander around the park, resolving as I meandered to discover the name of the family who had been so drawn to this spot as to build a house here against such odds.

Of course, then I would return home to Boston, and amid the rush of quotidian living, forget, until next time…

Fast-forward a decade: Day one, minute five, of my involvement with the FDR Suite Renovation Project.

The scene: Judy and Sean Palfrey, Father George and I are sitting in the study of the FDR Suite. I’m looking around, awed:

Judy: Yes
Michael: Who knew? (We did, the Palfreys and Father George were thinking, but were too polite to say.)
Sean: That’s the problem. It’s a too-well kept secret. We need to get the word out.
Michael: I agree. Did he live alone?
Father George: No, there was a roommate.
Michael: Who was it?
Judy: Someone named Lathrop Brown. Friend of FDR’s, a congressman too, later.
Michael: Any other information?
Sean: That’s about all we know.
Michael: Hmmm. Lathrop Brown. Certainly doesn’t ring a bell. I’ll have to do some research.

So gentle reader: care to guess who donated the land for the Julia Pfeiffer Burns State Park, and whose ruined house I had been so curious about all those years? 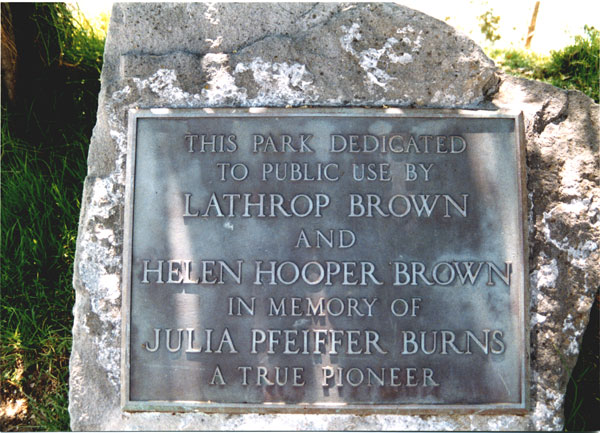 The plaque I'd missed on my travels...

And finally, at year’s end, as we contemplate indecipherables of past and present, a question: what odds might you have given that in eight thousand miles on separate coasts I would become intimately acquainted with two such tiny, but completely interrelated spots, so important to a single man of whom I’d never heard?

Personally, I wouldn’t have taken that bet in a million years.