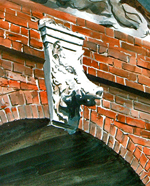 I’ve been doing a bit of research on the Porcellian Club, in advance of the architectural walking tour I’m leading this November for the Harvard Alumni Association entitled Presidential Pathways: Tracing TR and FDR at Harvard (More on that later.) My interest springs, of course, from the fact that TR was a Porcellian member, counting his admission among his proudest achievements, and that FDR tried and was blackballed, counting this among his life’s greatest failures  – a memory made even more galling by the success of TR’s sons a few years later. It’s hard today to understand precisely what all the fuss was about; it is, after all, just a club, with pleasant, though unremarkable facilities. (The rooms were published a number of years ago by the Crimson, for those of you wishing to take a look.) The appeal of the Porcellian however, was never the building: exclusivity was the lure, that and the fact that once admitted, you gained a dedicated group of friends for life. Apocryphal tales  of Porcellian loyalty abound: the old line that “any member who failed to earn a million by age 30 was simply given one by his fellows” is typical.  But there are many real life glimpses of the Porcellian’s reach that are quite telling: for instance, when H.H. Richardson, at the start of what would become a meteoric architectural career, submitted plans to build Trinity Church in Boston, the untested architect was given the commission over many more experienced competitors. The reason? We’ll never know for sure, but the fact that five of the eleven members of the deciding committee (not to mention the rector, Phillip Brooks) were fellow Porcellian alums certainly didn’t hurt. Membership in the Porcellian was the passport to many coveted things once you left the ivy-covered halls of Harvard, and you can begin to see why a forward-looking (and status conscious) young man like FDR was so disappointed at not getting in. Within the University of course, there was no question of the club’s official stature: you immediately appreciate the position the Porcellian held in that gilded age when you realize that it’s the only institution at Harvard to have its own entrance to the Yard. Donated by the club in 1901, and accepted without a moment’s hesitation by the College, the elaborate brick portal is technically dedicated to Professor Joseph McKean, who founded the Porcellian in 1794.  The large boar snout keystones on either side of the gate, however, proclaim otherwise:  this is a thinly veiled memorial to the power of wealth and privilege at 19th century Harvard, made all the more ironic by the democratic nature of the gate itself. Unlike the locked clubhouse door across the street – also marked by the sign of the pig – this gate is the only porcine threshold that the vast majority of Harvard students were ever allowed to pass.

May I hazard to guess that FDR regularly took an alternate route? 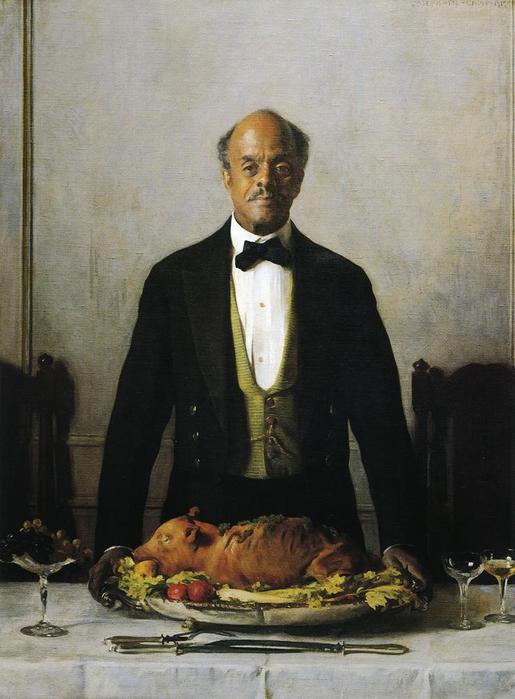 The Steward (Lewis of the Porcellian) Joseph DeCamp 1919

The Porcellian does contain one treasure though, amongst its collection of usual clubhouse bric-a-brac: the portrait of George Washington Lewis, painted by Joseph Rodefer DeCamp in 1919. This masterpiece of the Boston school celebrates the club’s most famous employee, whose 45 year tenure at the Porcellian spanned both TR’s and FDR’s time at Harvard.  Mr. Lewis appears to have been a highly unusual character for his day, a gentleman’s gentleman who very early on learned the art of the polite smack-down to keep his uppity charges in place, as Reverend Gomes once related in a 1996 New Yorker interview:

“It seems that when Elliot Perkins, the great-grandson of John Quincy Adams, was an undergraduate at Harvard, he decided to become better acquainted with George Washington Lewis, the formidable black steward of the Porcellian Club. So one day Elliot began to make conversation and asked, ‘Mr. Lewis, when did your people come up North?’ To which Lewis replied, ‘Mr., Perkins, my great-grandfather fought in the Battle of Bennington, which is in Vermont, as you may know.'”

One can but wonder, if only he’d been allowed in, how FDR might have fared….