Although there are no period pictures of the FDR Suite, we are extremely fortunate that the Harvard University Archives have preserved the photographs of Julian Burroughs, ’01. (That’s 1901 for all you recent grads.) Burroughs was an active photographer, a member of the Photographic Club, and an enthusiastic participant in the Chest of 1900, a time capsule of sorts, which the Harvard Library assembled to document daily life around the University at the turn of the last century. Fortunately for our researches, Burroughs took dozens of photos of various College rooms in May of 1900, just months before FDR arrived for his freshman year. A selection of these photographs are shown below. (Merely click on an image to open a larger version.)

At the Project offices, we have high-res (600 d.p.i.) tiff scans of these images, which in many cases are sufficiently clear to read titles on books, labels on jars, and in some cases, even read notes on the desk. Peering into these photos has allowed us to identify a palette of items common to the student rooms of the period. Combined with objects mentioned in FDR’s personal correspondence, we’re able, with a high degree of probability, to recreate the decor of the FDR Suite. As you can easily see, the rooms differed markedly from modern student digs. To quote historian Samuel Eliot Morrison in Three Centuries of Harvard:

A lad who came to Harvard with the makings of genius did not have his little spark quenched or his ambition trampled upon; conversely, the boy who entered a fool was very apt to graduate a damned fool. You might not belong to a single social club, yet cover half a wall with framed ‘shingles’ of membership in this or that society, with Harvard and school banners; with photographs of athletic teams, foreign travel, and actresses: with world’s fair souvenirs, posters, and stolen signboards: with steins, pewter mugs, empty bottles, and nude statuettes adorning the mantelpiece and bookshelves, from which dangled dance programmes, knick-nacks, and beer advertisements; a winning oar fastened to the cornice, and charts of summer cruises to the ceiling; and to this agglomeration there might be added the black strip with your name in white letters which delicately proclaimed your membership in D.K.E., or the rope, bar, and bandanna used in the Pi Eta initiation. The decorations and furnishings of students’ rooms from 1880 until after the War were pretty dreadful, especially after the ’mission style’ furniture came into fashion.

While we needn’t necessarily agree with Morrison’s aesthetic judgment, one must admit that his description was right on the mark, as you can see by clicking any one of the photos below. 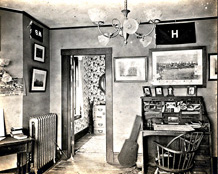 26 Russell. Russell was a Gold Coast dorm that stood where Adams House C-entry now stands. (For a quick glimpse of Russell, watch the opening video of this web site – it looked much like Claverly.) Note the penny postcards in the picture frame, the ukulele, and the luxurious electric light fixture in the view above. 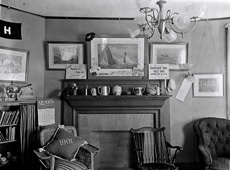 Here’s another view of 26 Russell, looking the other direction. Note the unused fireplace – this was a luxury building with central heating. It was also brand new in 1900. 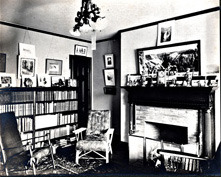 35 Randolph. Built in 1897, Randolph Hall, now part of Adams House, was one of the premiere Gold Coast dorms, with its own breakfast room (with murals by the famous artist Edwin Penfield, now the Coolidge Room) swimming pool, and racket ball courts. 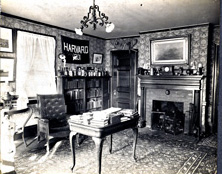 Here’s another room in Randolph. Note the Morris chair, the forerunner of today’s recliners. These adjustable chairs were very popular with students, and we know from FDR’s correspondence with Sara that Franklin had one just like it. Also note the snowshoes above the door. Sports equipment such as golf clubs, guns, football helmets, balls, bats, rackets etc., were commonly found in the rooms of the period. 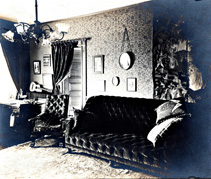 48 Ware. Built in 1894, Ware Hall on Harvard Street was another luxury building, though the address was less prestigious than FDR’s Mt. Auburn. Of interest in this photo are the day bed and sofa pillows. These pillows, illustrated with Harvard mottos or sports scenes, recur again and again in period pictures. 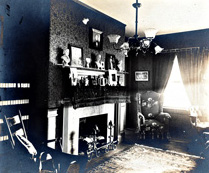 Another view of 48 Ware. The curtains here were the model for the FDR suit study; the paper, probably a dark crimson, is also similar to the study’s. 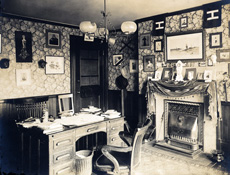 61 Hastings Hall. One of the older dormitories, Hasting was still heated by individual grate, and the sole illumination is gas. Students were required to keep their own fires and buy their own fuel, though college porters could be hired for $25/term (for the value of this amount in today’s currency, click to carry water for washing, firewood, or coal;, tend a lamp; or polish boots. Note the spittoon by the fireplace. Seemingly most students smoked pipes or chewed tobacco. 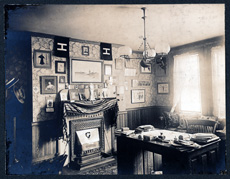 Another view of 61 Hastings, looking the other direction, though apparently Burroughs decided to remove the bottle of "Carters Ink" just visible on the top left of the desk in the previous picture before he took this shot. To give you some idea of the resolution possible in these pictures, the calendar to the left of the fireplace reads "May 1900" and shows a hunt scene beneath an advertisement for a local tailor.

Perkins Hall, of 1893, located on Oxford Street, is still also lit by gas in 1900. Note the extension tube from the overhead chandelier to the small gas lamp on the desk. It’s no small miracle that all these buildings didn’t burn to the ground, and in fact Harvard faced a number of serious fires in student dormitories during the first years of the new century, including both Thayer and Randolph Halls.

Gracious living at its best: Westmorly B-22. This suite, just down the hall from FDR’s in Westmorly Court, had just been occupied by W.K. Vanderbilt when this picture was taken in May 1900. Although this room is paneled, unlike the FDR suite, this picture and the one that follows are a gold mine of information for restoring the Suite. The music on the piano, by the way, is The Absent Minded Beggar (1899) – Words by Rudyard Kipling, Music by Arthur Sullivan. (Thanks to Rick and folks at parlorsongs.com for helping with music for the FDR Suite!) 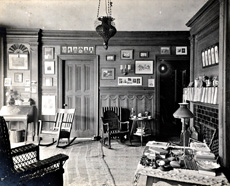 Another view of B-22. W.K. Vanderbilt occupied this custom-designed suite for just a single semester before leaving Harvard to get married. He never returned. Interesting features to be replicated in the FDR Suite: the collection of pipes on the table, rugs over rugs on the floor, and the collection of tea materials on the small table. 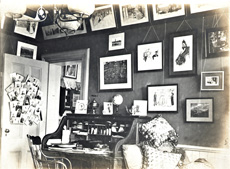 This unidentified Gold Coast room is one of my favorites; almost every element we see repeated in the Burroughs pictures occurs here: the small chafing dish, the collection of postcards and cartes de visite hanging in their special metal holder on the door; the stuffed rolltop desk; the Gibson girls on the wall….

Reproduction of these photos in any format without the written permission of the President and Fellows of Harvard University is strictly prohibited.