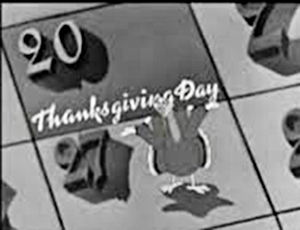 I’ve always been particularly fond of the film “Holiday Inn” with Bing Crosby. You know the one, I’m sure: it introduced Irving Berlin’s “White Christmas” to the world. The gist of the movie is that Bing gives up New York showbiz (and partner Fred Astaire) to retire quietly to Connecticut where he can lie around “doing time, being laaaaazy.” He converts a massive old house he bought into an inn, which will only open on holidays. That’s where the fun starts. Needless to say things don’t go as planned, and by Thanksgiving der Bingle is sitting alone, crooning the ironic “I’ve Got Plenty to be Thankful For,” with his girl in the arms of his old partner and the concept for the inn sold to a  movie production company. This being 1941, each holiday is introduced by a little animation: the one for Thanksgiving pictures a turkey, obviously confused, running back and forth on a calendar from the last Thursday of the month to the second to last and back again. What’s going on here? It’s an inside joke, surely, but of what?

Well, the answer lies in what some took to derisively calling “Franksgiving.” In 1939 the general manager of the Retail Dry Goods Association wrote to Secretary of Commerce Harry Hopkins warning that the late calendar date of Thanksgiving that year (November 30) would adversely effect  retail sales.

Remember this was still the day when it was considered bad form for retailers to display Christmas decorations or have “Christmas” sales before Thanksgiving. With the economy still in a slump, FDR issued a proclamation moving Thanksgiving up a week, to the 23rd.

The plan encountered immediate opposition, especially from Republicans, which was surprising given their pro-business stance. Alf Landon, Roosevelt’s challenger in the 1936 election, called this “another illustration of the confusion which [Roosevelt’s] impulsiveness has caused so frequently during his administration. If the change has any merit at all, more time should have been taken working it out… instead of springing it upon an unprepared country with the omnipotence of a Hitler.” Athletic associations weren’t pleased either: it wreaked havoc with their football lineups. Cities, towns, schools and universities had to alter schedules as well. Overall 62% of Americans opposed the change with 79% of Republicans in the no column. Some began to call it “Franksgiving.”

As FDR’s declaration was based on the “moral authority” of the president, it was up to the states to decide whether or not to implement it. Twenty-three states’ governments and the District of Columbia recognized the non-traditional date, twenty-two states preserved the traditional date on November 30, and the remaining three – Colorado, Mississippi, and Texas – celebrated both dates.

The proposal fared a little better in 1940 & 41, but Congress soon had enough of the confusion. By joint resolution, Congress fixed the date on the fourth Thursday, where it remains.

This little tale has  been in preparation for a slight Thanksgiving shift of our own. Last year, as I sat beside my table groaning with goodies, it occurred to me that this would be a good time for the Foundation give back something to our students. About a tenth of the College doesn’t leave campus for Thanksgiving: most of our international students, for example; and those on the West Coast, as well as some who just can’t afford the travel. Suddenly, the College is a rather lonely place for those without somewhere to go. So this year, I decided that we (the Foundation via the new FDR Global Fellowship) were going to spread the Harvard hand of cheer and give an All American Thanksgiving Eve Supper in the Suite. We’ll be moving out the Morris chairs and day bed in a few hours, and 35 students from five continents, five Houses and the Yard, will be joining us for a state-themed menu served buffet style:

(Those wondering about the logistics of serving so much to so many in such a small space, fear not: we’ve actually expanded down the wide and capacious hallway outside the Suite, the site of our new FDR timeline. With luck this will all be wrapped up tonight around nine, with just enough time for me to run home and get my own preparations underway.) The moral here is simple: while we take the historic preservation aspect of our role very seriously, we’re not slaves to a particular partisan view of the past, and happy, as FDR was, to laugh at past mistakes. Franksgiving was a failure, but the spirit that informed and motivated it was not. “The only way to have a friend is to be one,” FDR once famously said, and hopefully we’ll have 35 new friends tomorrow.

(Oh, and by the way: this supper is financed entirely by the Foundation, meaning by folks like you. If any of you would like to extend the generosity of your table to ours, just click the button below.)