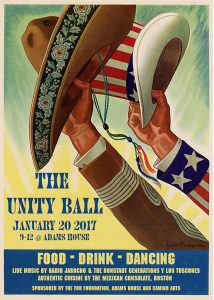 For those of you who missed The Unity Ball on January 20th, here is the text of Consul General Emilio Rabasa’s keynote speech – marking the 85th anniversary of President Franklin Delano Roosevelt´s Good Neighbor Policy

My first recognition goes to the Franklin Delano Roosevelt Foundation, its President & Executive, Michael Weishan and its Director, Jed Willard, for not only having organized this significant event, but also launching a whole year program based on the celebration of the 85th anniversary of the “The Good Neigbour Policy” which include different expressions of the Mexican-USA relations.

I also want to acknowledge and thank Dean Katie O’Dair of the Office of Students Life; Harvard Public Affairs and Communications; The David Rockefeller Center for Latin American Studies; the Latin Initiative “Camino Arts”; Radio Jarocho and Ronstadt Generations y Los Tucsonenses for their support and participation to make all this possible. Special thanks to Adams House of Harvard University for hosting us tonight, and to Acitrón for their catering, hope you like this sample of Mexican food.

Thank you guests, staff and students for being here tonight.

For the Mexican Consulate it is an honor to participate at this “Unity Ball” to remember and celebrate the “85th anniversary of the Good Neighbor Policy“, which generated substantial changes in the democratic life and fundamental values in Latin America and in Mexico.

Today, it is specifically relevant to remind ourselves and everyone what the good neighbor policy was about. For that purpose, I would like to quote former President Roosevelt at his inaugural speech in 1933: “In the field of world policy, I would dedicate this Nation to the policy of the good neighbor—the neighbor who resolutely respects himself and, because he does so, respects the rights of others—the neighbor who respects his obligations and respects the sanctity of agreements in and with a world of neighbors. We now realize as we have never realized before our interdependence on each other; that we cannot merely take, but must give as well.”

Roosevelt was undoubtedly a visionary: 84 years after those words México and the United States have become fully interdependent in a diversity of activities like trade, investment, academia, technology, innovation, culture, particularly cinema, tourism, agriculture, industry, services and national security.

The good neighbor policy enforced the ties between USA and Mexico in such a way that transformed our relationship from distant neighbors to great partners and friends after NAFTA in the 1990s. From war in the XIXth and beginning of the XXth Century, to an alliance of two neighbor-friends who fight together against common foes such as crime and drug dealers; partners who invest and trade among each other, in a dimension seldom found between other neighbor countries; and creative cosponsors of art, sports and entertainment.

Integration has been so intense between our two countries that particularly now, it is essential for Mexico to conduct a proactive and creative foreign policy that includes political dialogue, constructive negotiation, the protection of Mexicans abroad, cooperation for more economic development and the defense of Mexico’s interests, here and in the world. We are now facing a new era in the relationship with the United States of America.

As such, a good neighbor policy has to consider the wider context of our present and future relation.

Thirty five million Mexican-American leave in this great country, out of which the third part were born in Mexico. These immigrants through hard work and effort, produce $240 billion each year, pay $90 billion in taxes and use only $5 billion in public services. Mexican-Americans generate 8% of the US GDP. Mexican migrants spend 86% of their earnings inside the United States; they only send 14% as remittances.

It is important to mention that those millions of Mexicans who have emigrated to look for work, are productive and good people, who represent Mexico´s best. Their contributions include professionals, scientists, innovators, artists, creators, academics, small and large entrepreneurs who invest in the United States and generate many jobs. Also, women and men who work tirelessly every day in agriculture, trade and services; Mexicans who contribute not only to their families on both sides of the border, but also share their values and efforts to the greatness of the United States and Mexico.

I consider this isn’t a zero sum game, but a win- win relation. Let me be clear that undocumented immigrants are not taking away a slice of anybody else’s pie, they’re making the entire pie bigger.

Additionally, the U.S. Chamber of Commerce estimates that trade inside NAFTA sustains 14 million American jobs, 6 million exclusively by Mexico and eight million with Canada. Trade US/Mexico is more than $1.3 billion dollars per day, almost 1 million dollars per minute. 40% of the parts that make up Mexican exports are made in the US, in other words, 40 cents of every dollar spent on Mexican goods support US jobs.

However such strong interchange has not been limited to trade and business. Some concrete examples show the diversity and richness of our common endeavors: The Academy of Arts and Sciences of Hollywood awarded the last 3 Oscars for best movie directors to two Mexicans: One for Alfonso Cuarón (Gravity) and two for Alejandro González Iñárritu (Birdman and The Revenant). In sports, ask the Dodgers about their Mexican pitcher Fernando Valenzuela’s performance. In Science, NASA awarded the Exceptional Achievement Medal in 1989 for his work in the USA, and in 1995 the Nobel Prize in Chemistry went to Dr. Mario Molina, a Mexican scientist, for his research achievements at the University of California. There is an endless list that comprises also other activities such as gastronomy, arts, music, dance and certainly the business world. Our Marine and Armed Forces have engaged in humanitarian aid to the USA, in case of natural disasters such as it was when hurricane Katrina hit New Orleans in 2005.

At present, Mexico, a 1.2 trillion dollar economy, is one of the world´s more open economies in the world, with a free trade network along 46 countries. We are the 13th exporter world wide, and by year 2050 project to be the 8th world economy.

In agricultural goods 1,596 million dollars are worth of exports in the food industry to more than 150 destinations

In education the percentage of graduate students in engineering and manufacture is higher than in Germany, Brazil, Spain, USA and UK.

Mexico is the 9th exporter of medical appliances, and an elite country of medical tourism who attends one million foreign patients each year.

Culturally Mexico is the 6th country with more sites declared Patrimony of Humanity, 1st one in Latin America, By the way, for this year UNESCO declared the Mexican Constitution that celebrates its centennial, a “memory document for humanity”. The Mexican capital has been recognized as the American Capital of Culture for 2017. Since 2015 we returned to the 10th touristic destination world wide, with more than 30 million visitors each year.

Last but not least, we proudly host more than one million Americans leaving throughout Mexico.

In 2017 Mexico will continue promoting the best causes of humanity, including respect for human rights, combat climate change, create a new global governance on migration and refugees and a new instrument for the prohibition of nuclear weapons, among our key foreign relations goals.

Finally, I would like to recall two examples drawn form our bilateral relation´s history that clearly show, how a good neighbor policy between the USA and Mexico, has worked in solving border issues by dialogue and negotiation:

Last century a shift in the regular curse of Río Grande that served as frontier between the two neighbor countries, created a conflict over about 600 acres (2,4km2) between El Paso, Texas and Ciudad Juárez, Chihuahua, known as the Chamizal conflict. After intense dialogue and negotiations during the administrations of Presidents Kennedy and Johnson of USA, and López Mateos-Díaz Ordaz from México, a solution was reached with a construction of a channel to redirect its waters, in which both countries shared the cost, along with the cost of three new bridges and the creation of the Chamizal National Memorial as a museum, to increase visitors awareness of cooperation, diplomacy and cultural values as a basic means to conflict resolution.
Another case was the dispute over de salinity of the Rio Colorado waters which originated in the USA side and deeply affected agriculture on the Mexican side, mainly in the northern state of Baja California. In 1972, the United States and Mexico found a “permanent and definitive solution” to the salinity problem. The US in addition to agreeing to provide Mexico with the quantity and quality of water required by its farmers, built a desalinization plant in Arizona to process the water from the Wellton-Mohawk diversion. This solution was reached during the Nixon-Echeverría administrations, and I know the case very well, because my father being the Foreign Secretary of Mexico talked and negotiated the solution with Henry Kissinger, the then American Secretary of State.

Those examples are true inspirations on how to solve frontier issues among our two countries through dialogue conducted with respect, and negotiation shaped with creativity.

It is true that nowadays we need a more secure border, but, for the benefit of both countries, not only of one, since the issue is not only for the control of undocumented migration and drugs into the US, but also to stop the weapons and money trafficking from the US to drug cartels and organized crime in Mexico, which is literally killing my people. A two ways problem, requires a two ways solution, between two good willing neighbors.

The friendship between our countries has been mutually beneficial and such harmony deserves to be preserved. Let’s continue on building the bridges of friendship and goodness through negotiation, cooperation and mutual respect.

A good neighbor policy must be conductive to solving problems, particularly border issues, through dialogue and negotiation on equal footage, not by confrontation, less so by subordination.

A good neighbor policy means finding ways to leave, not only in peace, but even more so, in harmony, making the neighbors border a truly bridge of richness and security and not a wall of isolation.

Thank you all and have a great night!