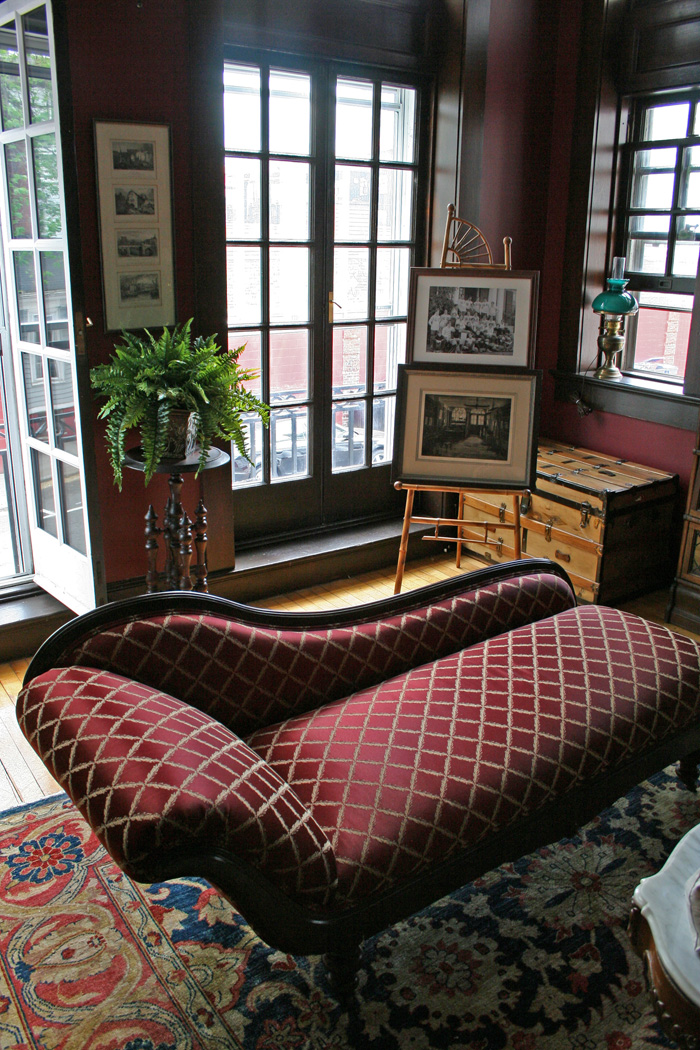 We have a new arrival in the Suite this week. A wonderful burgundy and gold late 19th-century daybed that looks as if it were made and upholstered for the room. As beautiful as it is though, it almost didn’t make the cut: I had initially passed on the purchase two months ago. We did, after all, have a perfectly fine divan in it’s place, a bit fussy perhaps, but in good shape, and did we really need to be second-guessing furniture choices at this stage? But then two events conspired to make me change my mind. The first was a revelation by one of our antiques suppliers that our initial purchase was in all likelihood the product of the famous cabinet maker John Jelliff, and worth many times the amount paid for it. (You can view this piece in the previous post.) The second motivator was the result of a whole semester’s research: Amanda Guzman, Adams House ’11 and one of our project investigators, had just finished putting together a photo database of all the student room photos in the Harvard archives. (Some of these are already online, HERE.) Once these pictures were assembled into a single group, rather than strung out through dozens of boxes in the Archives, we were able to start analyzing similarities between the various interiors. One thing I noticed immediately was the prevalence of reclining couches, like these two examples seen below: 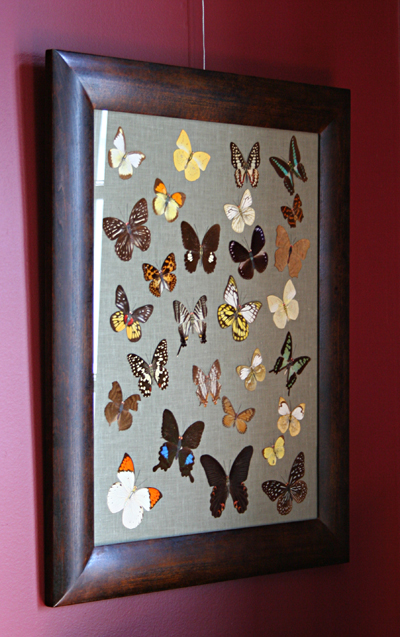 Sometimes decorative objects are the result of research and a bit of creativity; FDR writes to Sara in November 1900 "The butterflies are most ornamental." Lovely! Where do you find a Victorian butterfly collection? As it turns out, on Ebay -well, sort of. Period collections cost astronomical sums, so I tracked down a loose assortment of antique Formosan butterflies; then carefully mounted them on linen and framed them. They now hang over FDR's desk, and, I think, look "most ornamental."

With so many couches vs. upright settees in the photos, the decision to acquire the daybed and sell the divan became obvious. Which leads to a question many of you have been asking: How are we going about choosing what items to include in the Suite? Well, like any good historical site we’ve created what’s called a narrative, a basic premise or rationalization which defines the moment in time we’re attempting to hold. For the FDR Suite, it’s a weekend in May, 1904. Franklin (Frank to his friends) is away at a house party (he hasn’t had much studying to do, paying only slight attention to the graduate studies in history he’s about to drop.) Lathrop (Jake) is away as well. He’s been in New York since January, having, like Franklin, completed his undergraduate studies in three years. Jake had hung around the College this past fall to manage the Varsity football team, but later decided to return to New York to get his feet wet in his father’s real estate firm. All his possessions are all still here though – no point in being uncomfortable during those week-long graduation ceremonies in some hotel! In a month or so, after Commencement, two large moving wagons will appear at the door of Westmorly Court bearing  staff who’ll pack and disperse the contents of four years of life at Harvard, readying the rooms for their next occupants. But for now – for this one sole weekend in May 1904 – the Suite is available for your asking, an intimate view into the man who would become the 32nd President of the United States. Care to stay awhile? Please do! After all, any friend of Frank and Jake is a friend of ours…

As for how we go about selecting individual decorative items, that’s a bit harder to describe. Except for the two dozen or so items specifically mentioned in FDR’s & Lathrop’s letters, we’re forced to piece together likely scenarios, based on the two mens’ noted likes and habits, guided of course by the wealth of information contained in the 50 or so shots we possess of student rooms in the period. So for Lathrop, his bedroom will have a sports and hunting theme, two well documented passions of LB. Football memorabilia, horse prints, the hunting tapestry we’ve acquired – over the next year we’ll slowly piece together a period collection that reflects a sporting gentleman of the age. For FDR’s room, the theme is travel, the sea, and collecting, all noted passions of the 32nd President. A model of the 1903 sailing yacht Atlantic (just acquired); naval pieces, travel scenes, stamps, stuffed birds. Again, the next year will present a giant treasure hunt tracking down and purchasing suitable period items.

And speaking of purchases, for those of you who haven’t donated to our cause yet, or are due for renewal, we could use your support now. We’re about to begin acquiring the textiles for the suite (draperies, rugs, etc) and need to raise about 10K to finish. Any amount you can spare will be most welcome. The form to donate is found HERE.