Fellow Friends of the Foundation,

In the wake of so much bloodshed and cultural turmoil here and abroad in recent weeks, I wanted to share with you some cheering news for a change. I just this morning received an email from Farhan Javed ’18 (’of Currier House and Tulsa, Oklahoma) who is studying at the Central Bank of Armenia this summer thanks to the FDR Global Fellowship based at Adams House. The spirit Farhan evinces — a desire to both learn and teach, both to accept and be accepted, and most of all, to explore unexpected intellectual paths and ligatures — is EXACTLY what we have been trying to do with this program. We are so proud to have him as Adams’ (and Harvard’s) face to the world. Please read his email. I think you’ll find it a refreshing tonic to your day.

These past two months working at the Central Bank here in Armenia have really opened me up to a new world. I’ve had the opportunity to travel up and down the country, from the industrial cities to the forested mountain towns and rural villages. I can sincerely attest to the hospitality of the people here.  Wherever I’ve gone, strangers have invited me into their homes, insisted on feeding me, and have constantly pried and questioned if I am ever in need of anything. Armenia is, by global standards, a poor country with institutions and systems that don’t always function as they’re supposed to. But the people honestly have very rich hearts and that has made all the excursions rewarding.

One of the big challenges I thought I would face was observing Ramadan during the summer in this rather homogeneous conservative Christian nation. Most people here had never met a Muslim before, and despite strained relations with their Muslim majority neighbors like Azerbaijan and Turkey, I never once felt threatened or discriminated against. People were full of curiosity and I loved answering their questions. During my free time, I visited a lot (emphasis on “a lot”) of churches and monasteries. The sheer quantity of churches would put the Bible Belt to shame. It was an amazing feeling to be a fasting Muslim sitting in a church, listening to choir music, and realizing that we all have a mutual desire for some sort of transcendence. These instances changed the way I internally approached the labels of Christian and Muslim. It didn’t make me want to blur the lines, but rather increased my respect for the fact that we could choose to have those lines and that those labels gave us all meaning. It was also a great plus to find restaurants run by Arab-Armenian (members of the diaspora that had returned after living for a few generations in places like Lebanon, Iraq, and Syria) because they served halal food with the familiar zesty spiciness that I was familiar with from my own background.

Another cool realization I had was all the linguistic connections I began to make. The vast majority of Armenians only speak Armenian and Russian (a vestige of their Soviet legacy). I had the fortunate opportunity to be able to take Armenian classes at the bank and as I progressed I noticed some very definitive cognates and similarities between Armenian and my own native Urdu (the national language of Pakistan), which I realized was due to both regions having been under heavy Persian influence for significant periods of history. Discoveries liked that increased my sense of the interconnected-ness of our world.

The work at the bank itself has been fantastic. It’s been an amazing learning process working with the most brilliant economists and econometricians that Armenia has to offer. I have had the chance to go to several conferences where we had finance chairs and economists from the IMF, the World Bank, the EU, and various universities across the world deliver presentations on the most cutting edge developments on economic policy and econometric modeling. My work over the summer has led to the development of a working paper where I analyze how indirect effects of oil price shocks outweigh the direct 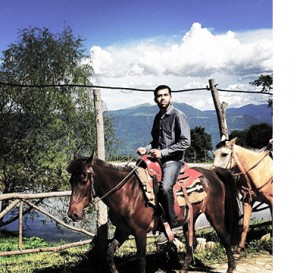 effects for Armenia. This actually has far reaching implications because it means that central banks ought to view a good chunk of oil-importing small open economies (which the majority of developing nations are) as oil-exporters when it comes to combating fluctuations if they have strong trade linkages to oil-exporters. This sort of insight can change the way governments from these countries pursue trade policies and respond to adverse shocks around the world to better safeguard against global crises, benefiting the lives of their citizens.

All in all, if I could go back, I wouldn’t do it any other way. My final presentation is on the 25th, after which I’ll be mostly concluded with my work here. Currently doing my best to relish these last few days!

I look forward to catching up in the Fall!

(And of course, if this spurs you to want to create other experiences like this for future students, please email me at michael.weishan@fdrfoundation.org as we TRULY need your financial support to continue this program. M)