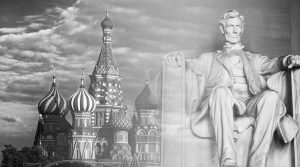 As the Kremlin wages an unyielding disinformation campaign against the United States and its European allies, Washington is still reeling from Moscow’s interference in the 2016 election and only just beginning efforts aimed at tackling this major national security threat.

Almost a year after election day, there are some signs of life in U.S.-led efforts to counter disinformation. While allies across the Atlantic have long faced off against this Russian weapon, the 2016 presidential election — filled with revelations about the Democratic National Committee (DNC) hack, use of Facebook advertisements, and Russian troll armies on social media — opened the eyes of many in Washington to Russian President Vladimir Putin’s preferred tactics.

“When we look at the U.S. election, the size and the risk appetite was probably something that was of surprise — but as far as the methods and interest to actually attempt to sway the opinions, that is nothing new, at least in Europe,” Jānis Sārts, director at the NATO Strategic Communications Centre of Excellence, told The Cipher Brief.

[Read the rest of Mackenzie Weinger’s article at “The Cipher Brief”: https://www.thecipherbrief.com/article/international/u-s-struggles-russian-cyber-disinformation]