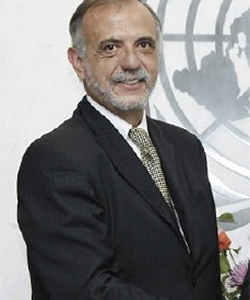 Join Iván Velásquez Gómez, Commissioner for the International Commission Against Impunity in Guatemala (CICIG), as he describes his battles against illegal security groups and clandestine security organizations in Guatemala – criminal groups believed to have infiltrated state institutions, fostering impunity and undermining democratic gains in Guatemala since the end of the country’s armed conflict in the 1990s. The CICIG  represents an innovative initiative by the United Nations together with a Member State to strengthen the rule of law in a post-conflict country. Before his post with CICIG, Commissioner Gómez was a prosecutor in Colombia, where he investigated the ties and relations of former President Uribe to paramilitary groups.

Co-sponsored by the Center for International Development, the Carr Center for Human Rights, and the David Rockefeller Center for Latin American Studies

Tickets to this event are free, with priority given to Harvard students, but you MUST register HERE