Sometimes, in the glow of presidential personality, it’s easy to forget the fact that there were two residents of the FDR suite: Franklin Delano Roosevelt, and his Groton chum, Lathrop “Jake” Brown. While almost every part of FDR’s life has been minutely documented, Brown’s story is much murkier, generally surfacing only in reference to his much more famous roommate. This summer, I became very interested in learning more about Brown, not only because we need to track down items for the Suite that accurately reflect the man and his tastes, but also because, beyond a few published facts – successful business man, married, father of two daughters, one-term congressman from Long Island – there is very little information available on Lathrop Brown’s life. Always game for new historical quests, I hit the Harvard Libraries and the Internet – and quickly came up short. Then, through pure luck, I was able to track down Brown’s granddaughter, Pam Canfield Grossman, in California. She and her husband Elmer were delightful, generously sharing a whole host of stories and family photographs that do much to fill in a life in many ways as varied and interesting as FDR’s. Concurrent with these discoveries, I also received a surprise from the FDR Archives at Hyde Park: the notes from extended interviews that Brown gave to Pare Lorentz, the famous Depression era film maker, in 1949. It seems Lorentz had contacted Brown at his ranch at Big Sur, with the idea of doing some advance groundwork for a film about FDR. While the production never took place, the interviews did, and the notes, compiled by Lorentz’ assistant Fanya Carter, provide an invaluable personal look into the times, and the men, who occupied the FDR Suite in Westmorly Hall. Over the next month or so, I’ll be posting in installments extended portions of the Brown interviews, which to my knowledge have not been previously published, along with many of the pictures provided by Pam and Elmer, which flush out not only fascinating details of FDR’s life and times, but also illustrate the 50-year friendship between Brown and the man who would become the 32nd President of the United States.

Notes from the Lathrop Brown Interviews: Part I – The Groton Years

FDR entered Groton at the beginning of of third form when he was 14 or 15. Most students began in the second form at 13, but LB was in third form at 13, due to an earlier altercation with the principal which had resulted in his being “kicked upstairs” ­– hence his being in the same form as FDR, despite difference in ages. Brown shared a dormitory and also parts of summer vacations, with FDR joining LB on Long Island, and LB visiting FDR at Campobello. Actually, students entering later than third form were pretty much out of the running, for school friendships had already established. Hence FDR arrived in time to become one of the boys, although he was never particularly outstanding. The one and only way of achieving distinction at Groton was on the athletic field; everybody tried out for everything, but only those who were outstanding in such competitive sports as baseball and football won the admiration of their classmates. FDR at that time was big-boned and clumsy, giving the general impression of always falling over his feet. He lacked the right kind of coordination (adds LB: he could never play golf worth a damn). Baseball was particularly important at Groton because of a long-standing rivalry with St. Marks. When FDR failed to make the team, he turned to rowing as a second choice. Rowing however was not sufficiently important to justify competition with other schools, so little attention was paid to it. 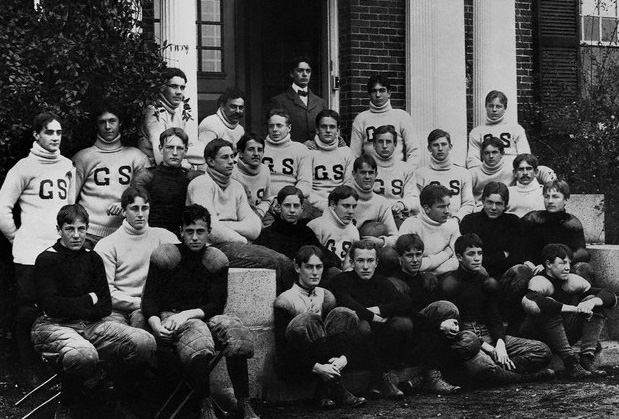 October 1899, one year before Harvard. Lathrop Brown, the football team manager is at the top of the stair, in tie. FDR is in the white turtle neck in the second row, second from left. The boys in dark jerseys are clearly the squad. Those with letters? Varsity? FDR's shirt is blank... Courtesy: FDR Presidential Library and Museum

LB remembers FDR in this early period as being very shy and having many of the characteristics of an only child. His half-brothers were not of his own generation. FDR had traveled much more than most boys of his own age. He had also turned to a number of pursuits suitable to a rather solitary existence, i.e. he began “collecting” earlier than most boys. He had an inquiring mind, and unlike other boys brought up like a litter of puppies in a kennel, who spent their time cuffing each other, he had plenty of time to spend on individualistic pursuits. Because of this, he was more mature in many respects than his contemporaries. “His eyes opened earlier.”

Groton’s scholastic standard was extremely high, but FDR found his school work very easy. He was inclined to be studious, but not a bookworm. His interests were always diverse and he never studied one subject to the exclusion of others. 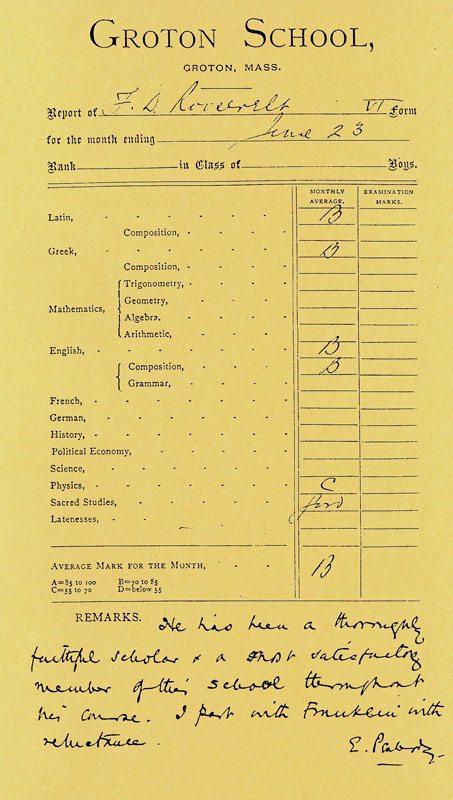 At the end of the fifth form, FDR and LB, together with some 800 other boys, took their preliminary examinations for Harvard matriculation. Sixteen points (or hours) were required; of the 800 candidates, FDR was highest with 15 points, LB and several other students had 14 points. FDR owed his one point preeminence to the fact he’d had a German governess fairly late; hence he knew advanced German, and the others did not. Result: FDR needed only one one-hour course to matriculate; LB and a few others only one two-hour course. So they spent their sixth form at Groton doing first-year college work and were therefore able to get their degrees at Harvard in three years rather than four.

LB recalls a treasure hunt at Campobello when he and FDR were about 15. FDR had a 15-foot knockabout. When he and his friends went sailing, they were always accompanied by an experienced sailor. FDR’s mother insisted on this and FDR never objected. Not only would the sailor make himself useful, but the tides in Campobello waters were extremely dangerous, and there were heavy fogs as well. FDR did the skippering, set the course, etc. 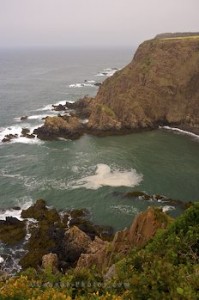 One afternoon the two boys decided to hunt for pirate treasure. The bay of Fundy was supposed to have been one of Captain Kidd’s hiding places. They sailed to a small island near Grand Manan, beached the boat and clambered ashore. They looked for and found the cave where Kidd was supposed to have cached some of his treasure. It was dank, cold and dark ­– just the way a pirate’s cave should have been. The boys took turns digging. Suddenly their shovel reverberated with a hollow clanking sound. They had struck a wooden plank. Excitedly they continued digging until they uncovered it completely. Initials were carved on the plank – K.K. FDR and LB jokingly decided Captain Kidd hadn’t gone to Groton and therefore thought Captain was spelled with a K. They continued to dig, but unearthed nothing more. They never knew whether the plank was the real thing or had been put their by a practical joker. But it didn’t much matter; they’d had a fine afternoon and had been able to feel, for a few moments at least, that they were on the verge of discovering real pirate treasure.

2 comments on “Lathrop Brown and FDR: The Groton Years”