Thanks to your support and generosity, things keep marching along. Further additions for you to contemplate: 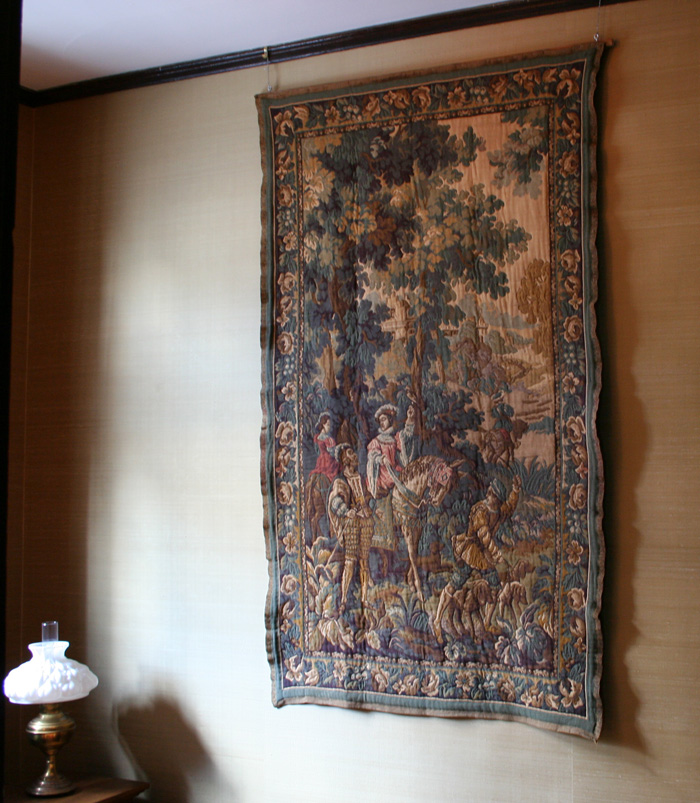 Just slightly crinkled from the crate: here’s the first piece of wall decoration in Lathrop’s bedroom, where the narrative theme will be hunting, horses and football: a ca 1890 tapestry depicting a Renaissance chase. Machine woven, this lovely textile measures 4 x 7′ and is in marvelous condition. It must say it really complements the lovely golden silk wallpaper behind it, or perhaps, the wallpaper complements it! Either way, it’s a terrific addition to the room. 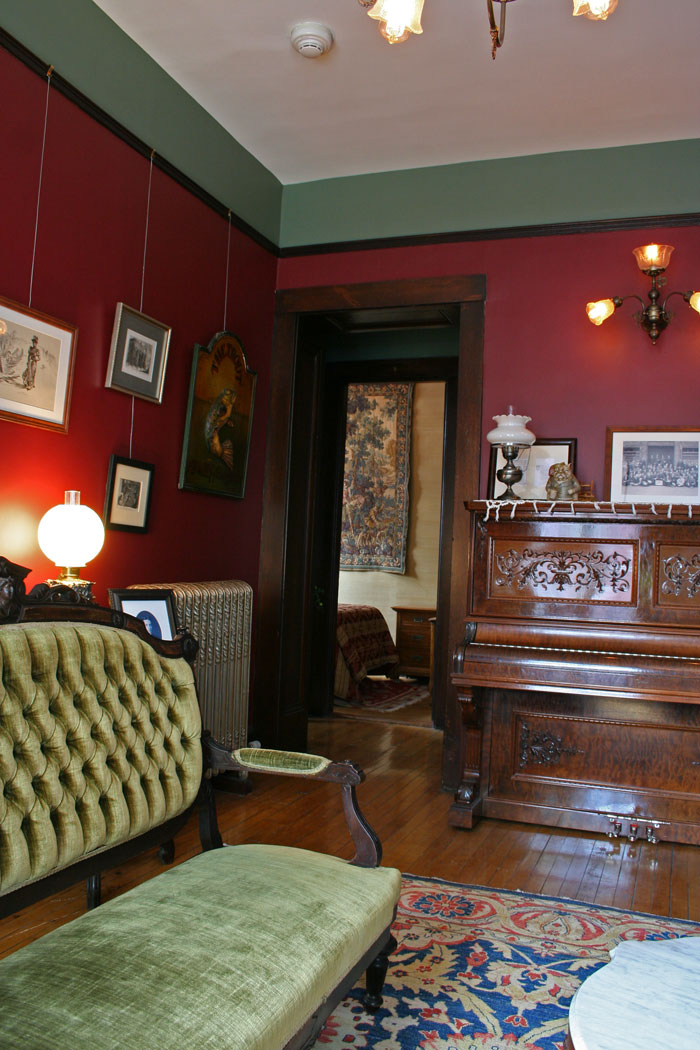 Here’s another view of Lathrop’s room from the study, giving you a better idea of the scale of the tapestry. As you can see, we are slowly starting to hang the 500 or so expected items on the Suite walls, by wire,  as was done in the period. I can assure you that this hanging process is a real pain, precariously tilting and tipping at each turn, made all the more maddening by the knowledge that  each piece will have to come down for the eventual wallpapering and then be rehung. Ah well, no complaints: better than bare walls! 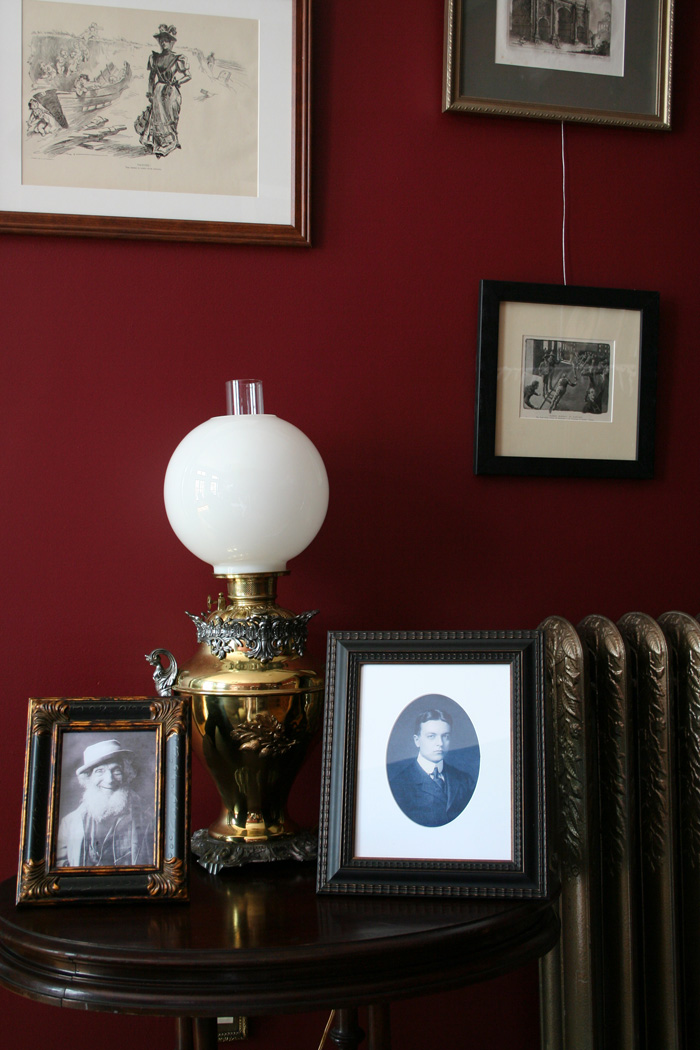 A delightful vignette: an ornate converted oil lamp (here shown with a somewhat miserable modern shade; we’re still looking for an etched period example), which keeps young Lathrop Brown and Harvard mascot John the Orangeman perfect company on a period parlor table. Above these, you may recognize from my March post the Harvard hazing print we ultimately managed to acquire, as well as another Charles Dana Gibson illustration “The Shore is Strewn with Wrecks,” in which the lovely lady you see striding so purposefully forward has just spurned the man barely visible in the distance, while cupids laugh amidst the hulk of an old whaler. 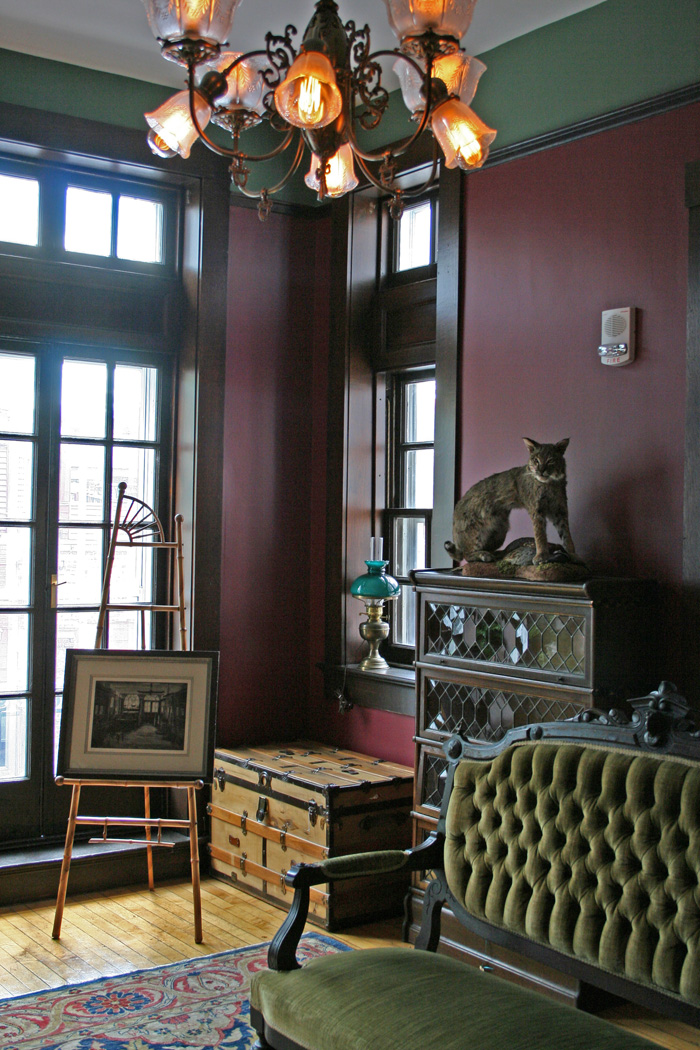 Now the above is one of my favorites! The wild-eyed taxidermy scene glowering at you from its elevated perch is a bobcat standing over its prey, a just-killed pheasant. While this is not something I would necessarily choose for my home decor, FDR most likely would have: our president-resident was quite the fan of taxidermy, especially birds, and this piece accurately reflects the Victorian love of such tableaux. The taxidermy was done by a well known wildlife artist in Michigan (using entirely documented specimens, for anyone wondering), and was first shipped to my house for safekeeping until I could bring it to the Suite. My dog growled at that cat for days! I’ve nicknamed the bobcat “Jack” (from John) and the poor bird “Eli,” as in “Sons of…” Poor Eli doesn’t seem to be getting up for the count… Ah well, what can you expect from a Yalie?! The leaded glass-front bookcase, by the way, (Lathrop’s case) is another gem that just arrived last week. Made in 1900, it is a Macey stackable. Quite ingenious for its day, the case is entirely modular; you purchased the base and top, and as many shelving units as you wished: height was fully adjustable to room, preference or circumstance. Once we locate a suitable example, a desk (Lathrop’s) will occupy the corner where the trunk now sits. (FDR’s will be opposite.) I’m thrilled to relate that these two desks are the final pieces of major furniture we’re missing! 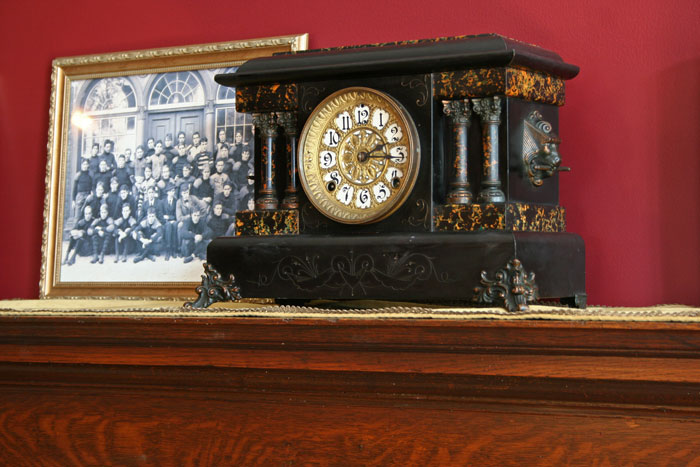 Several of you asked to see more of the mantle time piece I hinted at in my last post. Here it is, in full glory: an adamantine Seth Thomas coffer clock. This lovely creature keeps reasonably good time, richly tick-tocking away, striking the hour and half hour with the most sonorous tone I’ve ever heard for a mechanism of its size – more like a tall case clock than a tiny shelf piece. The stone-like decoration is hugely clever faux painting, by the way – very much the height of fashion in 1900, but about to be swept away by the incoming rush of Mission style just a few years in the future. 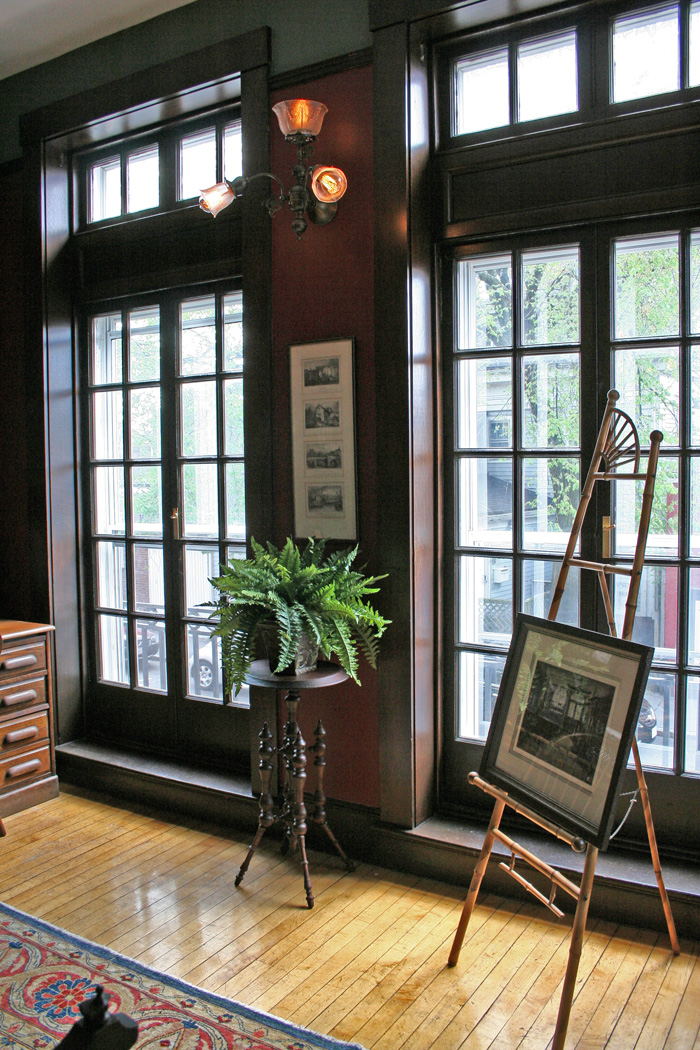 Three new pieces: on the wall, above the period table, four mid-nineteenth century engravings: “Scenes of Kent”;  on the easel, an original charcoal, “Interior of 3 St James Place, London,” by 19th century artist Johnstone Briant; and the bamboo easel itself, an absolutely fantastic example of the Japanese-influenced Victorian design so popular in the last years of the 19th century. 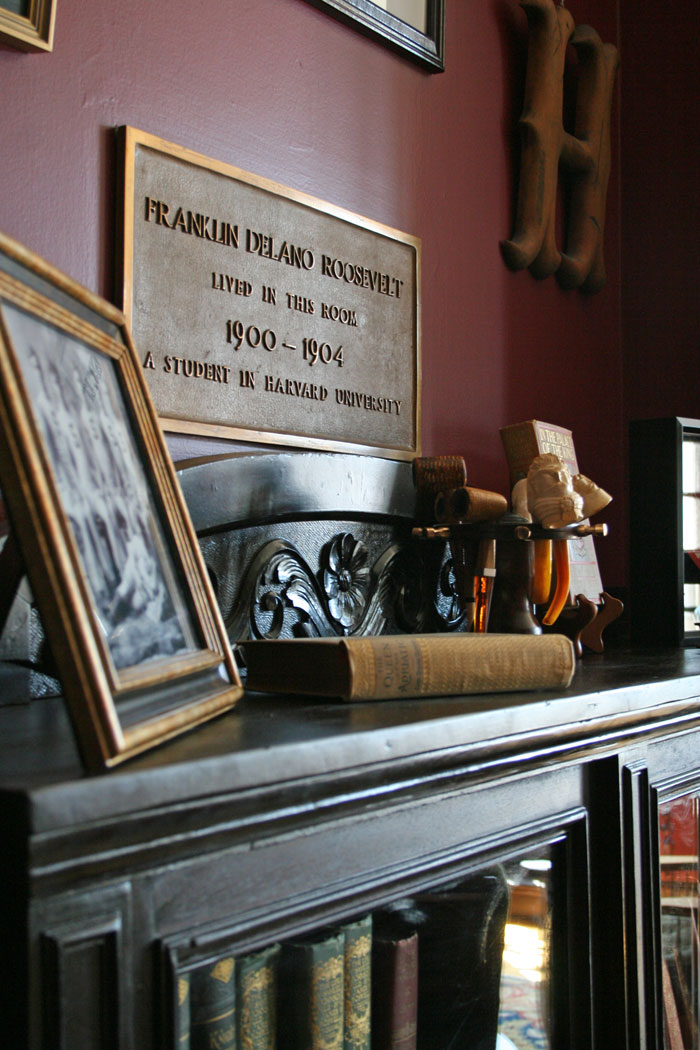 And finally, beneath the bronze plaque dedicated by Eleanor Roosevelt in 1960, the carved walnut bookcase next to the mantle. On it you’ll now find period travel guides, team photos, club medals and a marvelous period English pipe rack, which you can just see here, in the form of a ship’s capstan, bearing the copper label “Made from the timbers of Nelson’s fleet.” A souvenir of things to come for our future assistant secretary of the navy and commander-in-chief…

A thousand thanks  again to all of our wonderful supporters – corporate, charitable, alumni & otherwise – who have made such progress possible!