(This is the fifth and final installment in a continuing series taken from the unpublished notes of filmmaker Pare Lorentz. For the introduction to these articles, click HERE.) 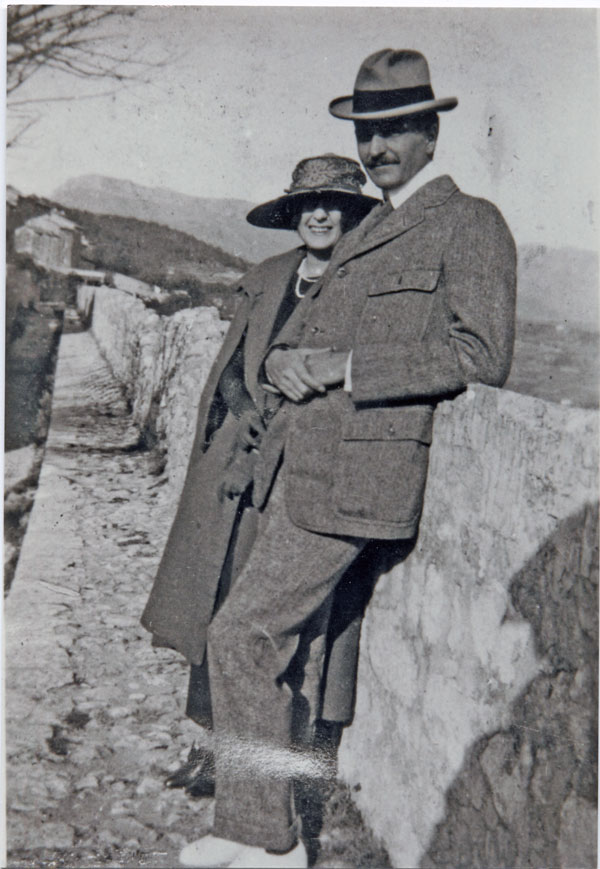 Lathrop and Helen, traveling during the 1920s. Courtesy Pam and Elmer Grossman 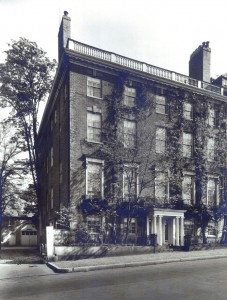 In the late 20's the Browns lived in Boston in this Bulfinch designed home on the Boston Common, while Lathrop studied monetary policy at the Harvard School of Public Administration. He never completed his degree, withdrawing for reasons of ill-health. Courtesy Pam and Elmer Grossman

After FDR was stricken with polio, LB visited him frequently. He says he was most impressed by FDR’s amazing self-mastery. He had been brought up “soft”; he had always had good food, good beds, good clothes, etc.; he had not been seared by the iron of adversity, other than political defeats.

But polio did something to FDR that LB had never seen happen to anyone else, at least not in the same degree. Men in the war had had comparable experiences, and many of them had been shattered to some extent.

But not FDR. He was not shattered in the least. He came out of it triumphant in spite of his broken body. There was nothing bumptious about his attitude; there was actually a great feeling of humility, yet a strong sense of triumph. He had become the master of himself, and because of this, was ready to be the master of others.

FDR had become friends with Al Smith and served as his campaign manager in 1924. He did not let his physical condition hamper his activity at the convention in any way. LB says FDR was there every hour the convention was in session, he attended every meeting, buttonholed all the delegates, etc, etc. 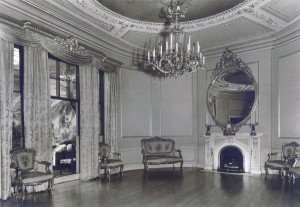 The ballroom of the Lathrop Brown home in Boston. The Turkish inspired conservatory can be glimpsed through the French doors at the left. Courtesy Pam and Elmer Grossman

LB was extremely interested in Roosevelt’s first inauguration, not only because of their deep personal friendship but because the state of the union was pretty ragged on that occasion. The last bank in the nation had closed that morning and there was a general feeling of panic.

Stocks may have crashed, but evidently not the Browns'; this from December 18, 1930

But what impressed LB was FDR’s manner at a 5 o’clock meeting that had been arranged in advance, wherein he and several other Harvard classmates planned to present FDR with an inexpensive memento. The party went to the White House somewhat reluctantly, aware that FDR had already reviewed a feeble parade and held his first Cabinet meeting. But they were on the day’s agenda and the meeting took place as scheduled.

FDR received them as if he hadn’t been doing a thing all day. He acted as if he hadn’t a single worry or concern. The group laughed and joked – frivolous silly undergraduate jokes – for fifteen minutes, with FDR setting the pace. And he wasn’t acting; he had the faculty of completely erasing the problems that had beset him before the meeting and would engulf him when it was over.

LB spent a night or two at the White House during FDR’s second term. It was during Easter vacation and he was taking one of his children to Virginia. While in Washington, he stopped to pay a brief call and was asked to stay over, which he did.

On another occasion (in 1940 or 1941) LB paid another call and FDR suggested that they have a swim n the White House pool. LB thought it was a fine idea and they had an excellent time, laughing and joking as if they were still back in school. LB said FDR had the most magnificently developed torso he had ever seen outside of a wrestling ring, that he charged up and down the pool like a walrus, making huge waves. LB says that he was ready to quit long before FDR showed any signs of stopping and that, when FDR finally decided he’d had enough, LB could hardly crawl out of the pool. Once again it was a case FDR’s apparently not having a care in the world.

Similarly, LB recalls an incident when he found FDR in bed romping with a couple of grandchildren. In the midst of the play, FDR casually remarked that the dollar was being devalued – a detail of worldwide significance – and continued the romp.

(Here ends the Pare-Lorentz interviews, but I thought it might be interesting to let Lathrop himself finish the piece. The following extract dates from 1954: 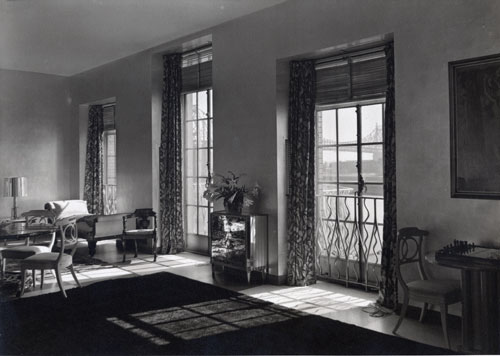 In the early 30's, the Browns occupied a 13 room flat in New York's newest, most stylish cooperative: architect William Bottomley's River House. Amenities included a club with swimming pool, tennis courts, bar, restaurant and ballroom, as well as a private boat dock on the East River. Above, the 65' long main salon, with a view of Roosevelt Island and the Queensboro Bridge through the windows. Courtesy Pam and Elmer Grossman

“I propose to set down some thoughts about Franklin Roosevelt in the hope of lessening a little the bitterness which some of his classmates have felt towards him. His life work was politics. What is politics? It is the transference of ideas or ideals into action, and is probably the most effective way to advance or retard the ethical progress of mankind. The frequent manifestations of politics, which smell under our noses, and which are called Tammany Hall or this machine or that, are but imperfect means to ethical or unethical ends.

Let me describe the situation as I saw it in Washington on Inauguration Day of March, 1933, which was the opening of FDR’s first term in office. Worried by what I had heard, I was up early while the city still slept, to find out what I could. There was nothing startling in the Washington papers, but a Baltimore paper carried the news that all the banks in the country had been closed, and none would open that day or for many days – what was happening piecemeal over the country through runs by frightened depositors had been done in toto through the device of a Bank Holiday, decreed by the governors of the forty-eight states. 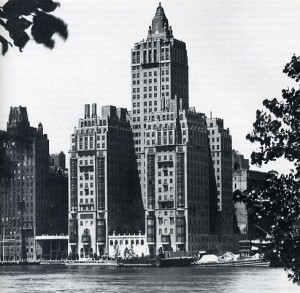 The River House as originally built, before the ironically named FDR Drive cut off its river access. The Brown flat is the balconied one to the left, fourth floor. In 1940, Lathop's brother built the Browns another spectacular home on Long Island – this time in the international style – which Lathrop and Helene furnished but never occupied.

Most of you were at home when this happened; your credit was long established and you could get along without cash, but to the visitors at Washington it was a bolt from the blue. And do you remember how discouraged you were, how sick the country was at this time?

Suddenly from the White House came a clarion call of hope and faith. In a few weeks the nation was lifted from the pit of despair to the high ground of confidence. It was no small thing that within one man could be contained enough of faith to restore the lost morale of a great nation. All over the world were the stirrings of the lesser people of the world. England, France, Italy, Germany and Spain fell prey to totalitarianism, socialism, fascism, or chaos. Under Franklin there was no revolution. The value of the dollar fell, but the value of the ‘forgotten man’ rose to is full measure of dignity and decency and a higher standard of living, topped by Social Security. Franklin’s ethics, learned at home, at school, at college and in his church at Hyde Park, gave him a sure sense of direction; and gave him enough of faith to lead the nation.

In the war was one factor about which there was no dispute. Without the help of Russia, Germany could not have been beaten. At Yalta and Teheran, Russia obtained little from us – it was the Chinese, going further than we thought wise, who made their own arrangements with the Russians about Manchuria. 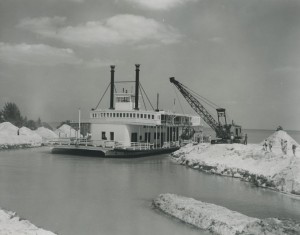 To conclude, I hope that our successors will give much thought to the broad concept of ‘peace’ and what makes it, and of ‘armed force’ and the good use of it, so that we may outgrow, as George F. Kennan puts it (in American Diplomacy, page 88), ‘the sweeping moral rejection of international violence which bedevils so many Americans in time of peace, and the helpless abandonment to its compulsions and its inner momentum which characterizes so many of us in times of war.”

(Lathrop Brown died four years after he wrote this, in 1959. Energetic to the end, he and Helen were in the middle of yet another amazing house project – the renovation of the paddle steamer Algiers into a winter home at Sanibel Island Florida – when he was stricken with a ruptured gall bladder and died. Helen, or Hélène as she preferred to be known, traveled extensively after Lathrop’s death, living in Bermuda, Tahiti and Hawaii. She became a recluse in her later years and  died in 1978.)