Dearest Mama,
I have jumped into a den of wild animals on my return, beginning with a dinner at the Club last Saturday, two private performances of the Pudding show & a crowd of 1903 men here for Herbert Burgess’ ushers’ dinner… FDR to Sara,
May 3rd, 1904:

Just so that you don’t think we’re concentrating on Euterpe at the expense of Thalia, I thought you might be interested in seeing one of our recent acquisitions for the Suite: 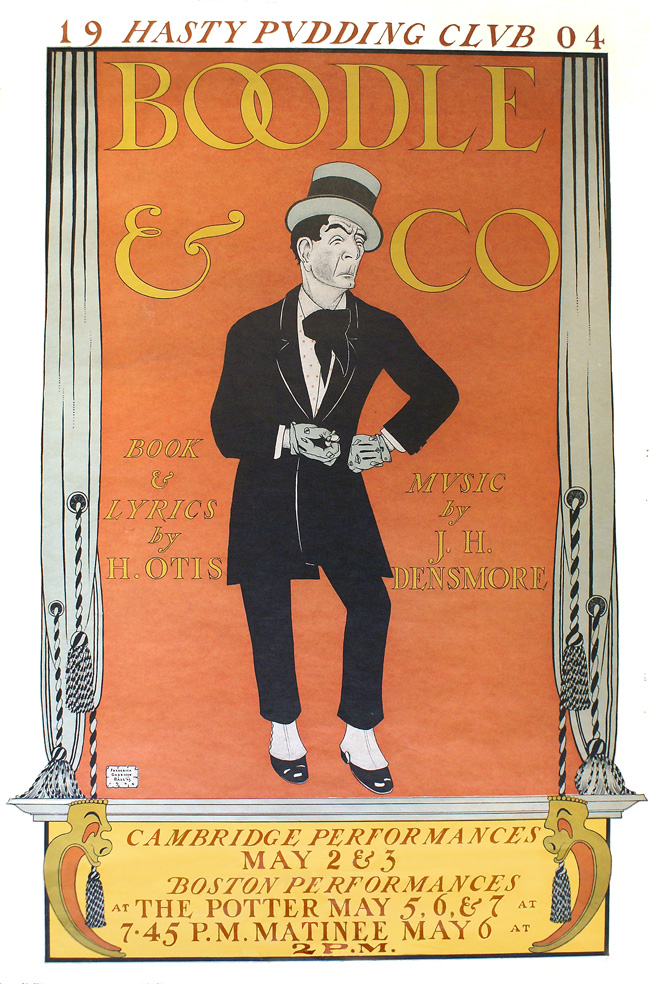 This wonderful image comes to us courtesy of the descendants of Chester Robinson ’04; Chester’s grandson Dave found this fantastic poster among the memorabilia Chester had saved from his Harvard years. Dave was kind enough to have the original scanned for us,  and after a bit of digital restoration work, it once again looks just as it did when FDR first saw it. A copy will hang on the door of FDR’s bedroom.

But what of the production itself? I was curious, especially after I saw other pictures from Chester’s collection showing the merry crew: 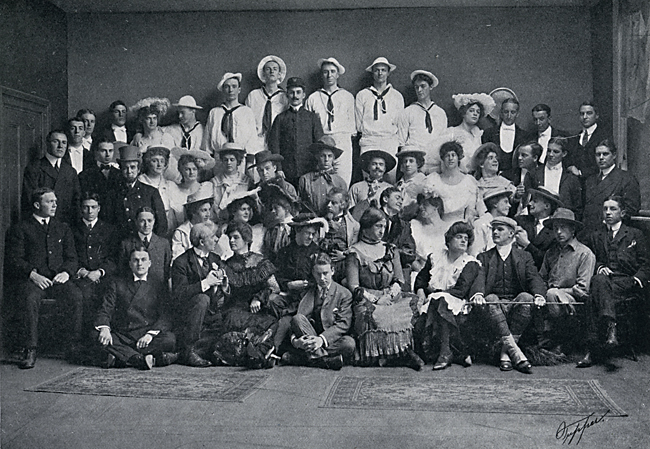 A bit more digging, and this article from the Crimson, Saturday, April 02, 1904:

Rehearsals of the Hasty Pudding Club’s comic opera “Boodle and Co.,” have been held regularly for the past four weeks, and the production promises not to fall below the standard set by former Pudding plays. Mr. J. W. Parks and Mr. M. B. Gilbert, who have been connected with past Cadet shows, are coaching the principals and the chorus respectively. The twenty-four musical numbers, by J. H. Densmore ’04, and the book, by H. Otis ’04, are bright and catchy and display considerable versatility.

The prologue introduces Simeon Boodle, an Idaho rancher, who, upon announcing his purpose of becoming rich and influential, promptly falls asleep in front of his ranch-house and dreams the events set forth in the two acts. The scene of these is laid at White Isle, a fashionable summer resort, where Boodle, now an opulent United States senator, takes his family for the summer. Here he gradually loses most of his money, but gains control of his hitherto ruling half, and sees his daughter finally married to the man who really loves her. After many amusing complications and minor love affairs, he wakes up in the epilogue, happy to find that he has only been dreaming.

Performances will be given as follows: graduates’ night, April 30: undergraduates night; May 2: public performances May 8: Boston performances in Potter Hall. New Century Building. Huntington avenue, May 5, 6, and 7, matinee May 6.

It seems the production was quite well received. Who knows, perhaps it’s time for a revival…