[Opening remarks, thanks, and prognostication comments]

Western counter-measures will develop along two metrics, one macro and one micro.

At the macro level we must broaden our understanding of what’s going on here, and come to a general agreement about what’s at stake. 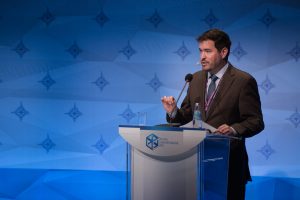 We are in a period of quick and dramatic societal change that’s not just technological, but more importantly socio-economic and structural, on a global scale.

This is a period when the way humans organize and govern themselves will shift, and the direction of that shift is what we are contesting.

And at the micro level we need to learn how to apply the lessons from social science, campaign management, and big data to information and influence campaigns.

These lessons are more immediately applicable to the problem and perhaps therefore more exciting, but in all honesty I do not believe they are nearly as important in the long run as the macro understanding.

So… what kinds of cooperation and actions will enable Western countries and alliances to triumph at the macro level?

We will learn to be clear about our ideology, the narratives we use to communicate and support that ideology, and our identities.

I say “identities,” plural, both because multiple identities build resilience in our populations, and because we’re going to learn that there is power in considering oneself not just a good Latvian, but also a good Balt. And also a good European. And simultaneously a good Transatlanticist, and also a worthy child of the Enlightenment.

We will increasingly understand that effectively responding to foreign influence requires standing up for who we are and what we believe. And that to do so requires a whole-of-government, and indeed whole-of-society response.

Honestly, though, I think many of our leaders are already there. Here’s a quote from Canada’s Foreign Minister Freeland a month ago, discussing the liberal international order:

“Since before the end of the Second World War, beginning with the international conference at Bretton Woods in 1944, Canada has been deeply engaged in, and greatly enjoyed the benefits of, a global order based on rules…. These institutions may seem commonplace now…. We may take them for granted. We should not. Seventy years ago they were revolutionary. And they set the stage for the longest period of peace and prosperity in our history…. Seventy years ago Canada played a pivotal role in forming the postwar international order. We are now called—by virtue of our unique experience, expertise, geography, diversity and values—to do this again, for a new century.”

And here, speaking the same day, and also in Canada, is President Obama:

“We’re in an environment where we are only accepting information that fits our opinions rather than basing our opinions on the facts that we receive — and evidence and reason and logic…. By the way, that’s been part of our prosperity — the Enlightenment — and we should continue to promote those values.

“[The liberal international order] based not just on military power or national affiliations, but on principle, on rule of law, on human rights, on individual freedoms, on empathy, on understanding across cultures — that’s our only choice. Those of us who believe in those values and believe in democracy have to speak out with conviction. We have to listen, we have to acknowledge imperfect information. We don’t have a monopoly on wisdom, but we have to speak on behalf of those things that we know are true and are right because both the facts and history are on our side.”

As the former president urges, the West will learn to embrace the challenge and have the argument: we will eagerly pit our system of governance against the alternatives. We will openly argue that the Rule of Law, Independent Judiciaries, Electoral Integrity, Representative Government, and Freedom from Corruption are good things, that Liberal Democracy works well and that we like our systems, both domestically and internationally.

We will learn not to debate about which Western actors are Nazis; not to repeat lies about child abductions, or gay mafia plots, or genocidal plans; not to waste any more energy than absolutely necessary in refuting blatant lies about nonexistent bombing errors, or arms deals, or anti-male or anti-white agendas. Instead we’ll learn to re-frame questions – like any good politician – and consistently promote our own, positive, Western narrative.

Which brings me to part two: what does this look like at the micro level?

At the micro level, Western countries and alliances will learn to run information campaigns like political campaigns. We will tap into the rich traditions of research in neuroscience, psychology, social psychology, anthropology, history, economics, political science, and other sciences to help us formulate the most effective methods of promoting our own values, and reframing adversarial campaigns.

We are already pretty good at tracking adversarial narratives. We will next learn to reframe those narratives and replace them with our own.

We will make the truth louder. Not so much with bots as with consistency of messages shared across ministries, governments, and civil society actors; the building of networks, and the identification of credible messengers; and with effective audience analysis to make sure our themes are well adapted to existing preconceptions.

We will learn to be proactive with those audiences, reaching out to them before they encounter disinformation.

We will become better mapping the networks of so-called experts utilized by our adversaries – and better at building networks of our own, replete with messengers credible to our target audiences.

We will prepare memes supporting our narrative and nullifying our adversaries’. Memes designed to break apart unnatural alliances between far left and far right, between loyal domestic opposition and foreign interventionists. Wedge memes, if you will.

We will learn the importance of repetition, repetition, and repetition when it comes to telling our own stories. And of not repeating adversarial or false narratives. We will make the truth louder.

We will not be trapped by our adversaries’ framing of persons or events. Here I quote MacLeans’ Kerry Glavin, describing how the Canadian media handled accusations that their new foreign minister was from a family of Nazis:

“Unfortunately, we’ve all spent a great deal of effort being clever in our elucidations upon how to properly distinguish between a Ukrainian patriot and a Nazi collaborator in the terror time of the 1940s, and about where one might situate the boundaries of Soviet-occupied Eastern Galicia on contemporary maps of the Polish-Ukrainian borderlands, and other such boring ephemera. This is what Moscow wanted, and it also wanted the not-especially-bright among us to be wondering out loud and often about whether it might be true that Freeland is a Russophobic Nazi sympathizer who can’t be trusted with the Foreign Affairs portfolio.”

Don’t get trapped in their frame. Discredit it, instead.

In short, we will realize that this is an ideological conflict, a contest of narratives with strategic outcomes.

We’re going to learn to take the fight to the level of meta-narrative, and there we’ll have the argument about which systems of governance are best for the governed.

And we’ll win the argument, because for all our challenges – and the challenges are real – liberal democracy, the post-war international order, and democratic governance are responsive and effective. 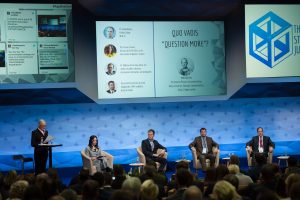 Finally, to the question of information activities having a higher profile in Western defense policies and doctrines.

They may not become as predominant in United States defense policy so long as we have by far the largest military and therefore the tendency to view problems and solutions through a steel lens.

Then again, that could change if the military successfully pivots toward a strategic doctrine that emphasizes the non-kinetic phases of “combat,” a process that I’m told is underway – but that I’ve been told “is underway” for probably ten years now.

I’d be interested in hearing from the Americans in this room as to progress around doctrine coping with “human terrain,” “target audience analysis,” “phase zero,” etc.

There’s also the chance that the United States could begin to re-emphasize information activities in civilian agencies, along the lines of our investments during WWII and the Cold War. I really don’t see this happening in the next two years, though. Quite the opposite, in fact.

But… outside of my country I believe we’re seeing a dramatic increase in the understanding of information activities. Especially in Northern Europe, from here in the Baltics straight over to Britain.

This is not surprising since (1) other democracies lack the burden of possessing history’s largest kinetic force and (2) they invented this stuff – some of the most compelling examples of information activities date back to WWI and the interwar period, when France, Britain, Germany, Italy, and the Soviet Union pioneered the use of modern technology to fight non-kinetic battles worldwide.

When you look at the current speed of technological change today, and the corresponding empowerment of individuals and non-traditional groupings of individuals, I see tremendous parallels with the interwar period.

I also see a greater clarity back then around the nature of the conflict. The people and organizations working to promote fascism, communism, and liberal democracy were consciously battling to define human destiny. And all sides were convinced they were right.

And this gets me back to my initial point: Western democracies will be well placed to cope with disinformation campaigns when we’re confident enough to reframe them.

I’m confident enough in the the post-war international order broadly, the European experiment specifically, and the Enlightenment tradition ideologically to believe that the West can win the narrative argument… once we learn not to play by our adversaries’ rules.