When Hillary Clinton was First Lady, critics lampooned her for “talking” to Eleanor Roosevelt, who had been dead for more than thirty years. (Full disclosure: when I was director of the FDR Library, between 1999 and 2010, I regularly did the same thing with both Roosevelts. They give great advice!) The revelation about Hillary and Eleanor caused quite a stir as Hillary Clinton was ridiculed for “talking with ghosts” and other New Age-y things. But Mrs. Clinton was not particularly embarrassed; in fact, she herself wrote in “Talking It Over,” her weekly syndicated newspaper column, “[Eleanor Roosevelt] usually responds by telling me to buck up, or at least to grow skin as thick as a rhinoceros.” “Talking It Over,” which ran from 1995 to 2000, was itself an homage to Eleanor Roosevelt—as Mrs. Clinton explained in her first column:

Some people may wonder whether I am looking to Eleanor Roosevelt for my inspiration. In thinking about this article, I re-read the column that Mrs. Roosevelt wrote nearly every day for the better part of three decades. She called her column “My Day” and covered subjects as varied as her annual picnic for disadvantaged boys, the meaning of religion in our lives and the fuss over a new bob in her hair. Sounds familiar!

My hope is that this column, like hers, will prompt all of us to think more about the human dimension of our lives. In some small way, I hope it will help bridge the gaps in our society so that we can reach beyond stereotypes and caricatures—and respect one another for the unique contributions each of us makes to our country. 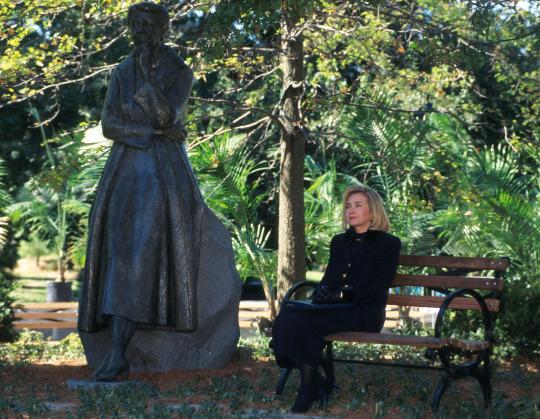 My wish too is that it will provide information about problems facing us that people can use to help decide what they think should be done. Mostly, though, this column will give me the chance to talk things over in the hope that some of you will join the conversation.

During my tenure at the Roosevelt Library in Hyde Park, we were well aware of the Clintons’ admiration for the Roosevelts. President Clinton visited three times while he was president (a record) and again after he left office. Senator Clinton visited the Library for an awards ceremony and on another occasion to ascertain the needs of both the National Park Service and the National Archives, the government agencies responsible for maintaining the Roosevelt National Historic Sites and the Roosevelt Presidential Library. Through the special historic preservation program “Save America’s Treasures” (which she started as First Lady) she took a special interest in Eleanor Roosevelt’s Val-Kill Cottage, a National Park Service site. As senator she was an early supporter of the funding necessary for the much-needed renovation of the Roosevelt Library that was completed in 2013.

And it is clear that Hillary Clinton has not forgotten the Roosevelt legacy in her campaign for the presidency. Her decision to kick off her campaign at the Four Freedoms Park in New York City shone an international spotlight on her commitment to revitalizing the Roosevelt legacy, “To be here in this beautiful park dedicated to Franklin Roosevelt’s enduring vision of America, the nation we want to be.” Located on Roosevelt Island in the shadow of the United Nations, it memorializes FDR’s Four Freedoms speech to a war-torn world to fight for Freedom of Speech, Freedom of Worship, Freedom from Fear, and Freedom from Want “everywhere in the world.”

In declaring her candidacy for president, Hillary Clinton spoke of the Four Freedoms as “testament to our nation’s unmatched aspirations and a reminder of our unfinished work at home and abroad.” She spoke of her husband and Barack Obama as “two Democrats guided by” Roosevelt’s “fundamental American belief that real and lasting prosperity must be built by all and shared by all.”

President Roosevelt called on every American to do his or her part, and every American answered. He said there’s no mystery about what it takes to build a strong and prosperous America: “Equality of opportunity. . . Jobs for those who can work . . . Security for those who need it . . . The ending of special privilege for the few . . . the preservation of civil liberties for all . . .a wider and constantly rising standard of living.” . . . It’s America’s basic bargain. If you do your part, you ought to be able to get ahead. And when everybody does their part, America gets ahead too.

This past July, as she accepted the nomination of the Democratic Party, Hillary Clinton faced a new challenge—the vitriol and fear mongering of her opponent. Again she turned to Roosevelt.“[A] great Democratic President, Franklin Delano Roosevelt, came up with the perfect rebuke to Trump more than eighty years ago, during a much more perilous time. ‘The only thing we have to fear is fear itself.’”

Franklin and Eleanor Roosevelt believed that hope—paired with a sense of civic responsibility—gave people the courage they needed to counter fear in the midst of the Great Depression and against fascism and totalitarianism a decade later. And as Eleanor Roosevelt described it in her final book Tomorrow is Now, that hope was always linked to a practical appreciation of the worth and obligations of every individual in a democracy.  “We have to work with the people as they are in this country, with all their shortcomings. . . . I remember clearly my husband’s words in his last State of the Union address in 1945:  ‘[I]n a democratic world, as in a democratic nation, power must be linked with responsibility and obliged to defend and justify itself with the framework of the general good’” . Things are not so very different today. Like the Roosevelts, Hillary Clinton must inspire us to act not only in our own best interest but for the general good, which—and this is the genius of democracy—benefits us individually as well.

Dr. Cynthia M. Koch is the Historian in Residence and Director of History Programming at the Franklin Delano Roosevelt Foundation. She is also the Past Director of the FDR Presidential Library and Museum at Hyde Park.