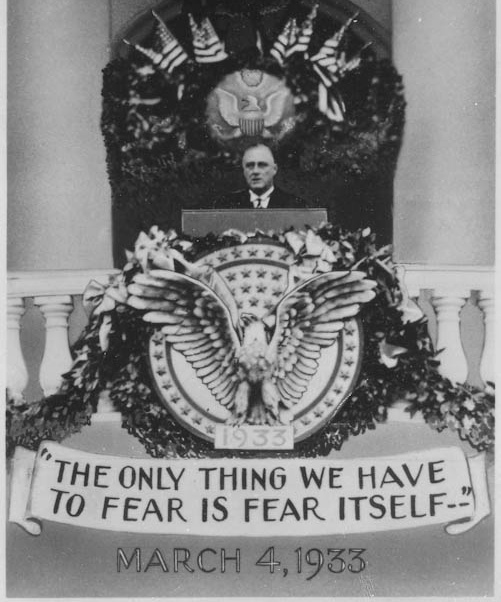 Franklin Roosevelt famously considered General Douglas MacArthur the most dangerous man in America.  Huey Long was number two.   What would he think of Donald Trump?

That got me thinking about what advice he might give us today.  When Roosevelt wanted the American people to face a difficult challenge, he often asked them to look to the past to find strength in the endurance of our forebears and wisdom in the actions of past leaders.  So, in the wake of our recent election, I turned to Roosevelt himself for some strength and wisdom.

Where, then, are the parallels for today? We face an uncertain future with an unproven president-elect whose campaign has stigmatized great swaths of the American public.

First of all, let us remember FDR’s charge to be wary of the hazards of fear.

Second, let us remember a comment from Woodrow Wilson that Roosevelt often repeated when things looked grim for progressive government. “It is only once in a generation that a people can be lifted above material things. That is why conservative government is in the saddle two-thirds of the time” (as quoted in James MacGregor Burns, The Lion and the Fox, 1956, p. 54). Perhaps progressive government in our generation had its moment with the Obama presidency and the pendulum has swung back to the country’s natural center.

But Roosevelt also said in the aftermath of a conservative backlash in 1938, “You have read that as a result of the balloting last November, the liberal forces in the United States are on their way to the cemetery—yet I ask you to remember that liberal forces in the United States have often been killed and buried, with the inevitable result that in short order they have come to life again with more strength than they had before” (Address at University of North Carolina, Chapel Hill, December 5, 1938).

We are deeply worried today about our populace, which seems hopelessly divided into separate and antagonistic camps. Roosevelt had something to say about that too, and in the aftermath of this election it is a warning that bears serious attention. In 1940, with Hitler’s conquest of Europe complete but for the elimination of Great Britain, the United States was deeply divided—more divided, the historian Arthur M. Schlesinger, Jr. wrote, than he ever again experienced in his long life.

War hovered over all, and the argument between interventionists and isolationists grew each week more savage and despairing. There have been a number of fierce national quarrels in my lifetime—over communism in the later Forties, over McCarthyism in the Fifties, over Vietnam in the Sixties—but none so tore apart families and friendships as the great debate of 1940–41. Though historians have dealt ably with the policy issues, justice has not been done to the searing personal impact in those angry days
[A Life in the Twentieth Century, p. 241].

While the attack on Pearl Harbor put an end to most national discord a year later, Roosevelt warned in his his 1940 Annual Message to Congress that internal conflict—which pits one group against another—is an open door to totalitarianism:

Doctrines that set group against group, faith against faith, race against race, class against class, fanning the fires of hatred in men too despondent, too desperate to think for themselves, were used as rabble-rousing slogans on which dictators could ride to power. And once in power they could saddle their tyrannies on whole nations and on their weaker neighbors.

Roosevelt was warning Americans to unite in the face of an external threat, but he was also speaking to a nation that was tearing itself apart. His deeper message was to strengthen democracy by uniting behind its values, which in 1940 as in 2016 require us to work together to use the tools of our democracy to preserve it.

Our times are not as desperate as those of 1933 or 1940. We are a nation that enjoys many blessings. We have serious challenges and we must meet them, but now is not the time for fear and dissention. Now is the time to redouble our efforts to strengthen our democracy, for what FDR said in 1940 must be reconfirmed in 2016. President-elect Trump used the tools of a demagogue to gain the presidency, but we must not allow the country to descend into autocracy.