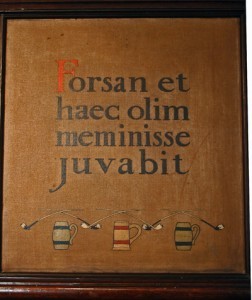 A line from Vergil: "One day this too may be happy to recall" graces the entrance to the Coolidge Room in Adams House. Note the pipes and beer steins, an integral part of 19th century Harvard.

Many of you may not be aware (as I was not, despite 3 years residence) that Adams House possesses a tremendous artistic treasure built into its walls, one that gives us a fascinating glimpse of what FDR’s Harvard must have looked like. I’m referring to the incredible series of murals in the Coolidge Room, the former breakfast room of Randolph Hall. This building, another one of Harvard’s fabled Gold Coast dormitories, has a fascinating history of its own. Built in 1897 by Archibald Cary Coolidge (later Harvard Professor and Head of the University Library System) this luxurious Flemish Revival edifice was state of the art when constructed: electric and gas lighting, private bathrooms, swimming pool, concierge entrance – all the trappings of a 5th Avenue Mansion. FDR himself originally thought to live there alone in a single, until Groton chum Lathrop Brown agreed to room with him;  the pair eventually spurned Randolph for digs in Westmorly Hall, 2 years newer and even more palatial.

Somewhere during the construction process, Coolidge must have convinced 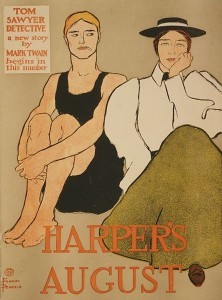 Edward Penfield to paint a series of murals for the breakfast room of his new building. How this occurred, and what precisely their connection was, is entirely unclear. Penfield at the time was a nationally known artist, made famous by his covers for Harpers magazine. 1897, the year he painted the murals in Randolph, was also – perhaps not coincidentally – the year Penfield wed. It’s possible that the newly married artist, never rich, decided to moonlight for additional funds. Or perhaps there was some personal connection to Coolidge, or to Coolidge’s brother who was the architect of the building. Whatever the case, Penfield surely warmed to his task, perfectly capturing the aristocratic, upper-class image that Harvard very much wished to portray (and did portray) during that era. Interestingly, these scenes of College life, though lovingly conserved at Adams for over one hundred years, have languished in scholarly obscurity: they don’t appear in many published canons of Penfield’s work, and are rarely mentioned even in Harvard art circles. That’s a real shame, because as you’ll see, they are spectacular. While FDR never mentions the murals in his College correspondence, undoubtedly he knew of them: Coolidge, who himself lived in Randolph, was FDR’s tutor, and it’s highly likely that Roosevelt had many acquaintances among the smart set living just next door. In any event, these pictures, painted just three years before FDR arrived in Cambridge, constitute a remarkably preserved window into the Harvard our 32nd president knew intimately.

The following pictures, by the way, are just a selection of the several dozen panels that circle the room at head-height. Unfortunately, my amateur photography doesn’t do them full justice. With any luck we’ll get the complete cycle professionally photographed next year. 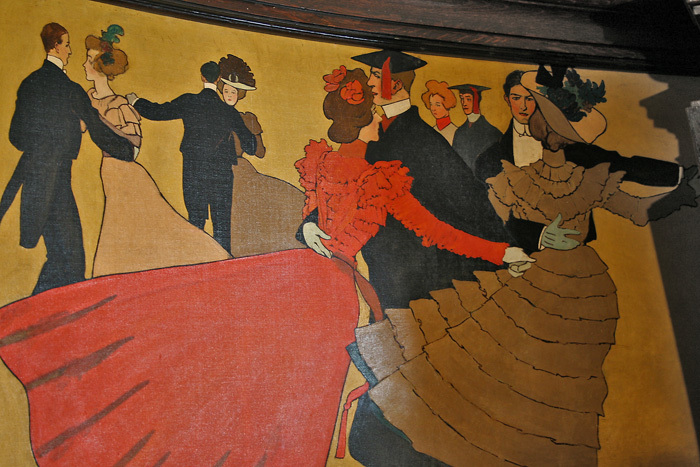 The ball: FDR was invited to attend the exclusive Saturday Evening Dance Classes (really soirees) at the Somerset Hotel, where the scene must have looked much like this. The image, by the way, is not distorted; the panel actually curves to meet the baronial fireplace just out of sight to the right. 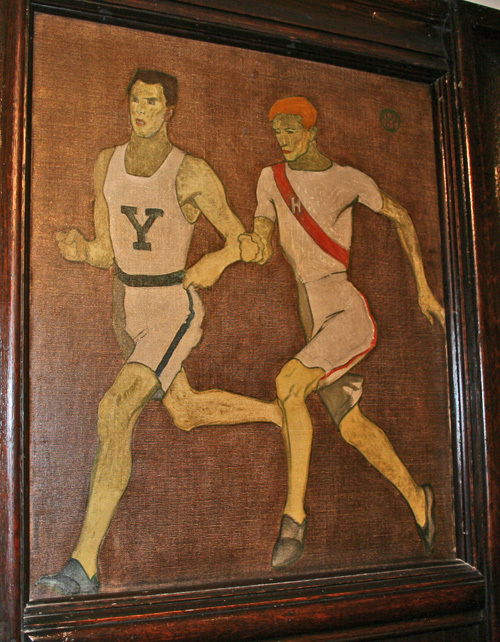 The track race: our Harvard boy seems momentarily behind, though soon to break out, no doubt! Other panels show scenes from football, hockey, and baseball. 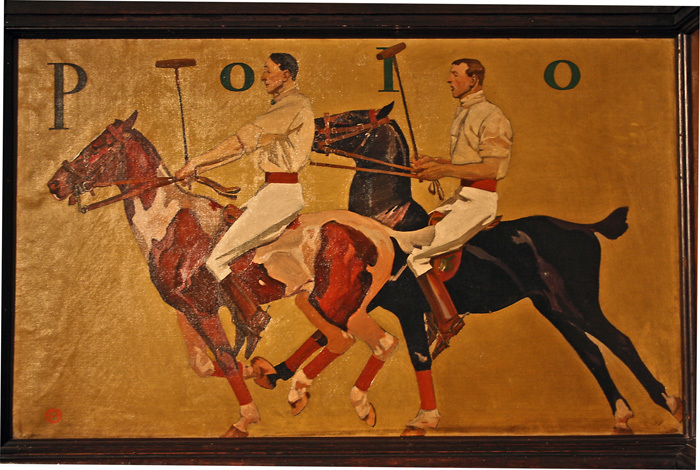 Tally-ho and all that! Watching polo at the Myopia Club on the North Shore was a common pastime for undergraduates. 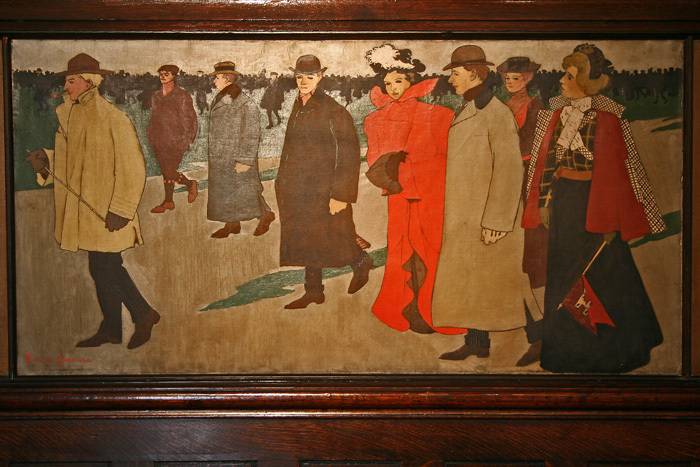 On the Way to the Big Game 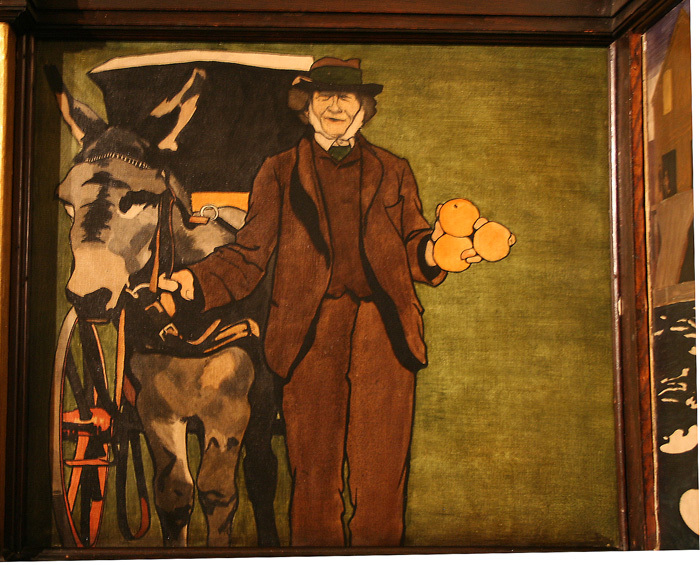 This is John the Orangeman, a cherished College character for decades. (You may be wondering how we know who this is, considering none of the panels bear labels. The fact is, the old boy had been totally forgotten until this past year, when I, by pure chance, discovered pictures of John and his donkey in several of the student scrapbooks now in the Harvard University Archives.) Once identified, the image becomes clear – according to Lucius Beebe in his 1935 work, Boston and the Boston Legend, recalling his own Harvard days not long after FDR's : "The Yard swarmed with personalities... Most beloved was John the Orangeman, who greeted all Freshmen cheerily with the same exclamation: 'I knew y'r father, fri'nd!" Welcome back, John! 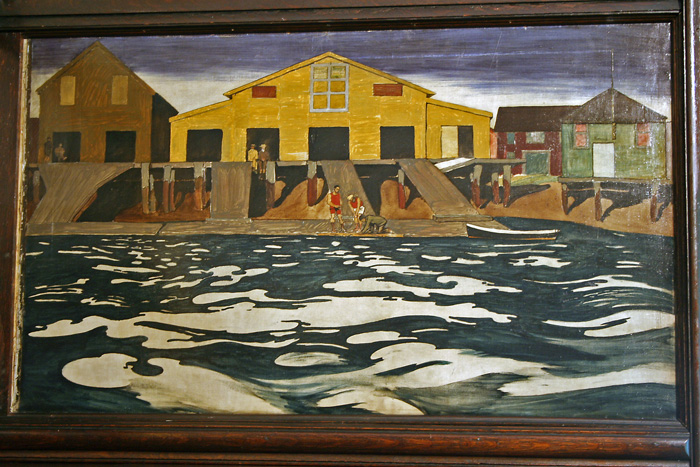 This is the old Harvard boat house, which FDR would have rowed from, located where the Weld boathouse now stands. Notice the rather run down buildings to either side – the University wharves – as well as the still tidal nature of the Charles. The riverfront would not look like today's for many more decades. Note, too, Penfield's amazing treatment of the water, with an almost deco feel to the waves. 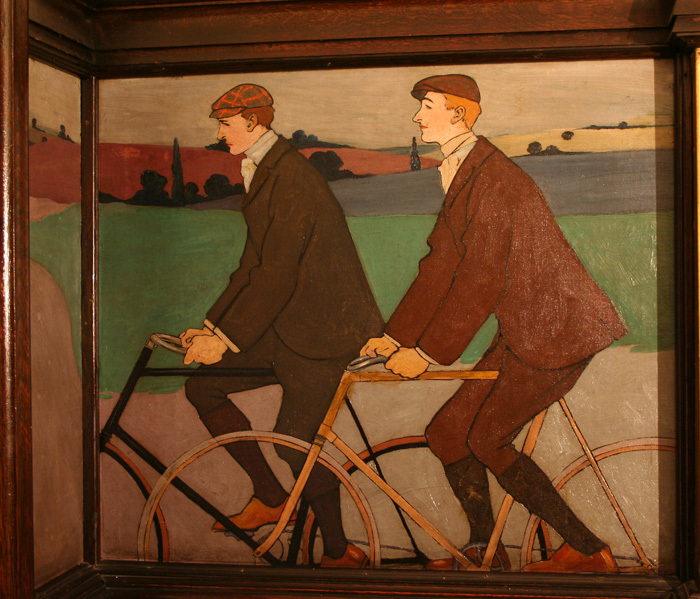 A soothing country ride on one's "Wheel." FDR kept a Columbia Chainless while at College.