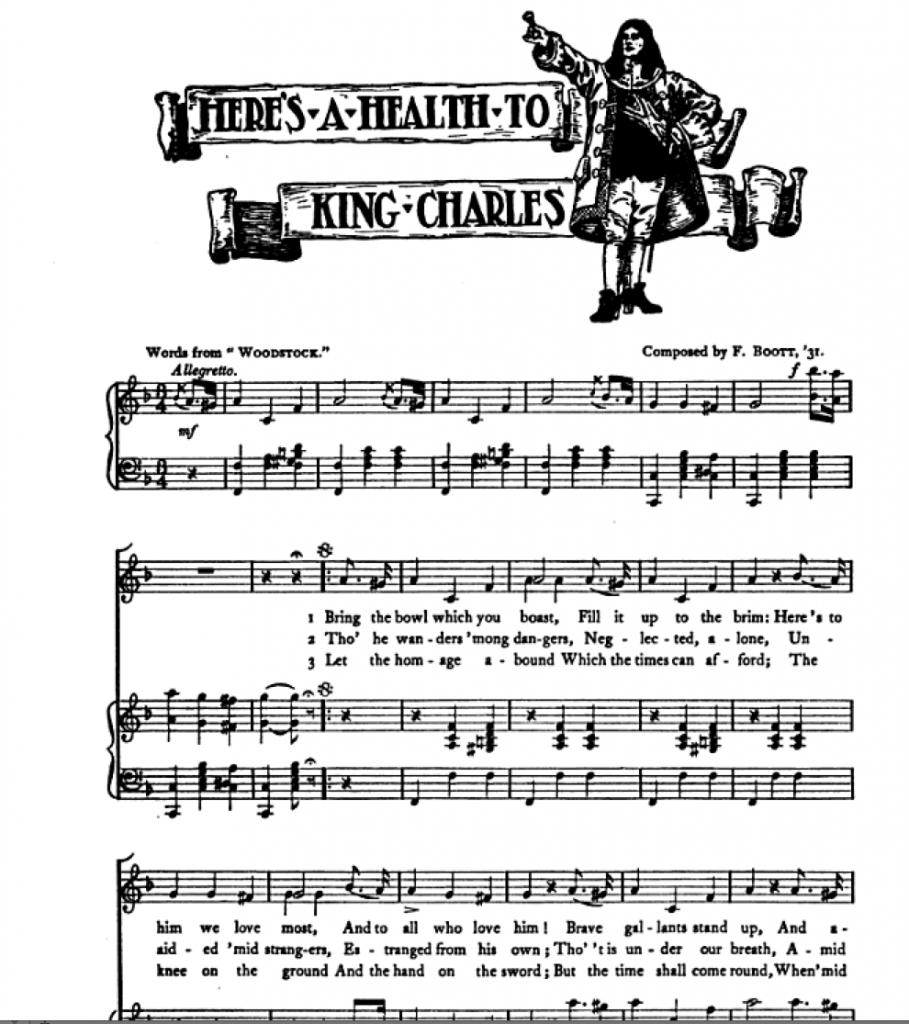 Throughout  the course of the the Restoration, I’ve been continually surprised and delighted to find little gateways back in time. Here’s another one. Last year, my dear friend Abbot Peterson ’58 died. Recently, his widow – another dear friend – Barbara, was cleaning out some files and came across an old 78. Labelled “Alvin V Laird sings to the class of 1904”, it had been mailed in 1950 to Abbot’s father, Abbot Peterson II, a member of FDR’s class. (As was Mr. Laird.)

The 78 contained two songs: “A Health to King Charles”  and “Dolores.” I haven’t been able to gather much information on “Dolores,” but “King Charles” was a very widely sung drinking ditty which would have been immediately recognized by FDR and Lathrop. The song is based on a poem by Sir Walter Scott (1771–1832) and perfectly embodies the Victorian romantic longing for causes lost:

BRING the bowl which you boast
Fill it up to the brim;
’Tis to him we love most,
And to all who love him.
Brave gallants, stand up,
And avaunt ye, base carles!
Were there death in the cup,
Here’s a health to King Charles.

Though he wanders through dangers,
Unaided, unknown,
Dependent on strangers,
Estranged from his own;
Though ’tis under our breath,
Amidst forfeits and perils,
Here’s to honor and faith,
And a health to King Charles!

Let such honors abound
As the time can afford,
The knee on the ground,
And the hand on the sword;
But the time shall come round
When, ’mid Lords, Dukes, and Earls,
The loud trumpet shall sound,
Here’s a health to King Charles!

So here, after tracking down someone who still had the means to play and digitize a 78 (!!!), for the first time in over a century, may I present to you: “Here’s a Health to King Charles”

This song, by the way, is part of an ongoing process to make a CD of “The Music of FDR’s Harvard” that will contain many of these wonderful old melodies well overdue for a come back. As always, your help in making this and our other work possible is greatly appreciated