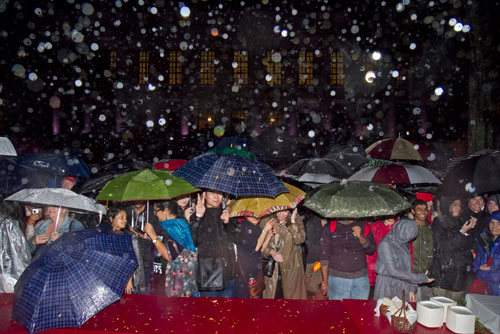 "At 7:45, nature took a turn for the worse. Just as students from Adams House — the only undergraduate House that had chosen a formal dress code for the occasion — prepared to march before the president, a downpour began. The torrent elicited a collective shriek and a sudden bloom of umbrellas," related the Harvard University Gazette. Photo courtesy the University Gazette.

Not to rain on anyone’s parade, but those of you not at Harvard this past Friday for the opening ceremonies of the 375th may have been in a happy majority. The weather, as we say in New England, was fouler than foul. A muggy 70º rain descended in the early afternoon, and turned into a steady wind-driven downpour by early evening. The large crowd of spirited alumni and students, packed into the Yard and Tercentenary Theater, soon turned the place into an unholy mess.  On today’s Six Buildings Tour, as we passed in front of Widener and witnessed the cleanup from the the previous night’s proceedings, one of our alums exclaimed: “I was at Woodstock. I was here last night. This was almost as bad.” Having missed both events, I can’t compare. I can only report I have never seen such destruction to the grounds. The grass in the entire Tercentenary Theater and large part of the Yard has disappeared into churned mud several inches deep.

As if to presage the dampened mood, this past Friday the Crimson issued a special edition: Harvard at 375: The Unclear Future. Less where-to-go than where we’ve been, the issue openly wondered: what next Harvard?

Despite the ankle deep mud in the Yard & the current national sturm und drang, I think we should take heart. This has, in fact, all happened before. The 300th Celebration, presided over by FDR in 1936, was so rain-sodden that top-hatted guests sloshed across planks hastily cast over flooded pathways, equally burdened by soon-soaked woolens as by a lingering Depression and the looming war in Europe.

FDR himself lightheartedly noted the troubled mood, both national and Harvardian as he began his address:

“The roots of Harvard are deep in the past. It is pleasant to remember today that this meeting is being held in pursuance of an adjournment expressly taken one hundred years ago on motion of Josiah Quincy. At that time many of the alumni of Harvard were sorely troubled concerning the state of the Nation. Andrew Jackson was President. On the two hundred fiftieth anniversary of the founding of Harvard College, alumni again were sorely troubled. Grover Cleveland was President. Now, on the three hundredth anniversary, I am President.”

To go back a little further, in the words of Euripides:

“There be many shapes of mystery. And many things God makes to be, Past hope or fear. And the end men looked for cometh not, And a path is there where no man sought. So hath it fallen here.”

In spite of fears, Harvard and the Nation of which it is a part have marched steadily to new and successful achievements, changing their formations and their strategy to meet new conditions, but marching always under the old banner of freedom.

In the olden days of New England, it was Increase Mather who told the students of Harvard that they were “pledged to the word of no particular master,” that they should “above all find a friend in truth.”

In this day of modern witch-burning, when freedom of thought has been exiled from many lands which were once its home, it is the part of Harvard and America to stand for the freedom of the human mind and to carry the torch of truth.

For centuries, the grand old saying, “The truth is great and will prevail,” has been a rock of support for persecuted men.

But it depends on men’s tolerance, self-restraint, and devotion to freedom, not only for themselves but also for others, whether the truth will prevail through free research, free discussion and the free intercourse of civilized men, or will prevail only after suppression and suffering—when none cares whether it prevails or not.

Love of liberty and of freedom of thought is a most admirable attribute of Harvard. But it is not an exclusive possession of Harvard or of any other university in America or anywhere else. Love of liberty and freedom of thought is as profound in the homes, on the farms and in the factories of this country as in any university. Liberty is the air Americans breathe. Our Government is based on the belief that a people can be both strong and free, that civilized men need no restraint but that imposed by themselves against abuse of freedom. Nevertheless, it is the peculiar task of Harvard and of every other university and college in this country to foster and maintain not only freedom within its own walls, but also tolerance, self-restraint, fair dealing and devotion to the truth throughout America. 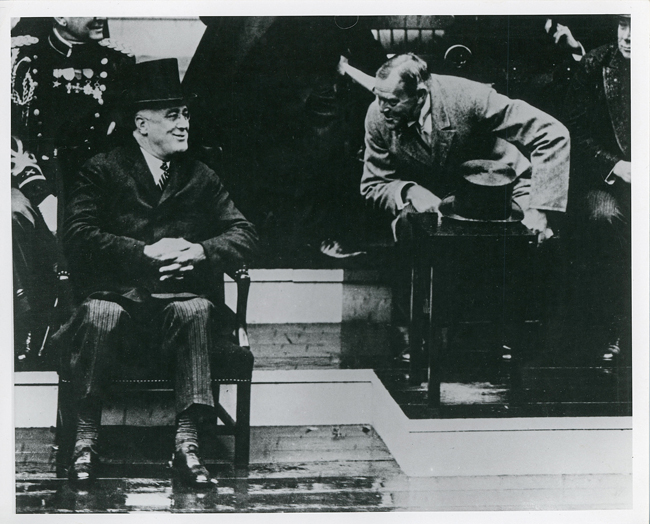 A rain-soaked FDR on stage, speaking to Grenville Clark, '03, at Harvard's 300th in 1936. FDR would go on to say: " I am not, you will observe, conceiving of the University as a mere spectator of the great national and international drama in which all of us, despite ourselves, are involved. Here are to be trained not lawyers and doctors merely, not teachers and business men and scientists merely; here is to be trained in the fullest sense—man." Photo courtesy FDR Presidential Library and Museum

Many students who have come to Harvard in the past have left it with inquiring and open minds, ready to render service to the Nation. They have been given much and from them much has been expected. They have rendered great service.

It is, I am confident, of the inner essence of Harvard that its sons have fully participated in each great drama of our Nation’s history. They have met the challenge of the event; they have seen in the challenge opportunity to fulfill the end the University exists to serve.

As the Chief Executive of the Nation I bring to you the solicitation of our people. In the name of the American Nation I venture to ask you to cherish its traditions and to fulfill its highest opportunities.

We need in the days to come as we needed in the past from Harvard men like Charles William Eliot, William James, and Justice Holmes, who made their minds swords in the service of American freedom.

They served America with courage, wisdom and human understanding. They were without hatred, malice or selfishness. They were civilized gentlemen.

The past of Harvard has been deeply distinguished. This University will never fail to produce its due proportion of those judged successful by the common standard of success. Of such the world has need. But to produce that type is not the ultimate justification that you would make for Harvard. Rather do we here search for the atmosphere in which men are produced who have either the rare quality of vision or the ability to appreciate the significance of vision when it appears. Where there is vision, there is tolerance; and where there is tolerance, there is peace. And I beg you to think of tolerance and peace not as indifferent and neutral virtues, but as active and positive principles.

I am not, you will observe, conceiving of the University as a mere spectator of the great national and international drama in which all of us, despite ourselves, are involved. Here are to be trained not lawyers and doctors merely, not teachers and business men and scientists merely; here is to be trained in the fullest sense—man.

Harvard should train men to be citizens in that high Athenian sense which compels a man to live his life unceasingly aware that its civic significance is its most abiding, and that the rich individual diversity of the truly civilized State is born only of the wisdom to choose ways to achieve which do not hurt one’s neighbors.

I am asking the sons of Harvard to dedicate themselves not only to the perpetuation, but also to the enlargement of that spirit. To pay ardent reverence to the past, but to recognize no less the direction of the future, to understand philosophies we do not accept and hopes we find it difficult to share, to account the service of mankind the highest ambition a man can follow, and to know that there is no calling so humble that it cannot be instinct with that ambition; never to be indifferent to what may affect our neighbors; always, as Coleridge said, to put truth in the first place and not in the second; these I would affirm are the qualities by which the “real” is distinguished from the “nominal” scholar.

It is only when we have attained this philosophy that we can “above all find a friend in truth.” When America is dedicated to that end by the common will of all her citizens, then America can accomplish her highest ideals. To the measure that Harvard participates in that dedication, Harvard will be justified by her effort, her purpose, and her success in the fourth century of her life.

Such wise words, and much to take heart from.

The 400th Anniversary Celebrations are scheduled for June 2036. God willing, I will take part. I wonder who will speak, and if he, or she, is even born yet…

For now, there is no way to know. But still, would it be too much to ask for dry weather?