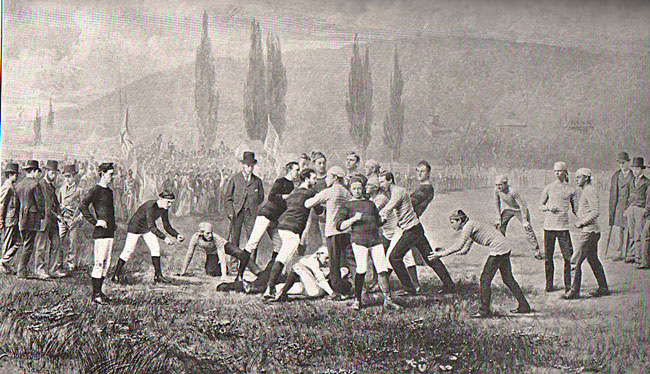 The Momentous Beginning - Harvard at McGill 1874

The Harvard season of 1874, which began in the spring, was destined to be historic for American football because in it occurred the Harvard-McGill game, the first game of intercollegiate Rugby played in this country and the contest which lead directly to the present intercollegiate game. This contest, therefore, and the circumstances attending its inception and the historic event itself deserve to be more fully recorded.

We at once set to work studying the principles of the Rugby game, practicing plays, and working out what could be done under the rules and particularly what tactics under the Harvard rules could be adapted. This gave us, as it turned out, some advantage, for with Yankee shrewdness we discovered that certain of our own plays could be introduced which, though we had not suspected it, had not been thought of by McGill. When in the match we used these plays, the visitors were dumbfounded, and for the moment questioned their propriety, but at once recognized their legality when it was pointed out by the umpire.

“The McGill University Foot-ball Club will meet the Harvard Club on Jarvis Field, Wednesday and Thursday, the 13th and 14th at 3 o’clock. Admission 50 cents.”

It’s worth noting that the fifty cents admission was charged for an entertainment fund. There was no athletic fund in those days. We had – noblesse oblige – to entertain our visitors and make their visit enjoyable and one to be remembered. How strange that must sound to modern ears. Think of entertaining Yale, or Princeton, or Cornell! Yet not a bad idea!…

At last the great day for football arrived.

In those days of early football the Harvard team was not outfitted with uniforms. No one in the memory of man had ever donned a uniform for football in any college. So we always wore our oldest clothes, which consisted of a pair of trousers and any old shirt. But on this occasion we did a bit better to present a respectable appearance and exhibit a semblance of a uniform. Each member of the eleven donned dark trousers, a white undershirt (which some thought had the advantage of ripping when seized) and a magenta handkerchief tied in a traditional fashion upon the head as was customary with the crews. And thus appareled, to our later mortification (we thought it fine at the moment) the Harvard eleven appeared on the field. In the first match under the Harvard rules, which was not a rough game, the clothing stood the wear and tear, but in the Rugby game it was soon reduced to shreds and patches. When the McGill eleven appeared on the field neatly uniformed after the English fashion, the contrast was remarked upon to our discomfiture.

A crowd of about 500 spectators, mostly students, lined the sides of Jarvis field. All were keyed with intense interest. It needed, however, but a few moments of play to relieve whatever anxiety there was and for it to become obvious that our easy going Canadian visitors had not taken the trouble to practice the game and were totally unfamiliar with it.  The match (three games) was speedily over. Harvard won all three.

The second match on the next day was a different affair. We now had to meet our opponents at their own game. Instead of the round “rubber” fabric ball used in the Harvard game, the ball was the English oval, leather-covered ball, substantially the same as that used today in the present American game. The match was hard fought and evenly contested for it turned out to be a drawn battle, neither side scoring a goal or a touchdown in the three half-hours. The fact that we held the McGill team to a draw at their own game speaks well for the skill and general excellence of our men at football, considering that they had only a few weeks in which to study and practice the game.  With the matches over, we did not feel that our obligations had ended. There were those of hospitality and sportsmanship. During the two-days stay of our visitors, all the Harvard clubs opened their doors to them; we took them to ourselves and did all that we could to give them a good time and make them feel the spirit of good-fellowship. And, indeed, we found them a set of as good fellows and sportsmen as ever punted a football. We had taken in several hundred dollars in admissions to the matches – quite a tidy little sum in those days – and with this, not being responsible to any auditing committee, I as autocrat of the Treasury am thankful to remember, we blew them off a banquet at Parker’s in Boston, and saw to it that the champagne flowed as it will never do again.

Editors Note: Now that’s my kind of post-game party! Harvard meet McGill again the next season in Montreal, and was once more victorious. Harvard’s Canadian hosts, gracious throughout, outdid even the hospitality shown by the College the previous year in Cambridge, so much so that many of the team members elected to stay a few additional days in Montreal. The McGill-Harvard matches were a watershed, and had the result “of creating at Harvard an interest in and a positive liking for the Rugby game,” according to Prince. Based on this experience, Harvard shortly thereafter suggested to Yale that a compromise might be reached in both schools giving up their particular games for a modified set of Rugby rules, and thus the first Harvard-Yale contest was played in 1875, initiating the sport now called American football.

On a personal note: Thanks to all of our new friends, several hundred strong, who made it back to Adams today for the Harvard Yale celebration, and toured the Suite. We’re so grateful for your show of support! And, congrats to our victorious team, who made this happy day possible. Go Harvard Football!

The FDR Suite Restoration Project at Adams House, Harvard College is funded entirely through your contributions to the FDR Suite Foundation Inc, a public 501(c)3 charity set up to create the only living memorial to FDR at Harvard, as well as a museum of 19th century Harvard student life. We do not receive funds from the University to support this endeavor, and we need your help!