On the eve NATO’s 70th anniversary, as American bombers redeploy to Europe for the first time in decades, it is essential to discuss the implications of US military operations around the world.  Those operations – especially those meant to be seen – send messages to US allies and adversaries alike.  Are they the correct messages and are they received in the manner intended?

Bryan Bailey is an Air Force cargo pilot, who in more than 17 years of operational experience has flown US military aircraft to 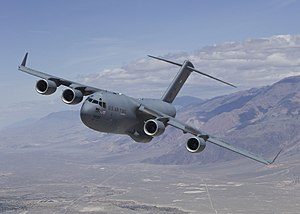 58 different countries on all 7 continents.  He has knowingly, and unknowingly, been part of many of those missions.  From humanitarian aid to Haiti and Iran, to counter drug support in Columbia – from airlifting Mongolian troops to the warzone, to taking Jordanians home – from combat airdrop resupply of isolated units in Afghanistan, to medivac of US wounded inside the lifesaving “golden hour” – no one questions the US military’s ability to move around the globe – at least not yet.

As freedom of navigation through the sea, air, space and cyberspace becomes contested, how or even should the US continue to assume dominance as a global power projector?