This week, one of our student researchers, Nina Ranalli of Eliot House, has the guest columnist slot. Having myself spent a large part of the last two years sifting through a Victorian twilight of  stuffed daybeds, dances at the Somerset, shooting parties in Sudbury, and Brahmin prides and prejudice, I note that I’ve become somewhat accustomed to the gas-lit feel of the age. Nina however, has the fresh perspective of the class of 2010, and I think you’ll find, as I did, that her impressions are quite revealing – both of our times, and FDR’s.     MDW

As a student researcher, I’ve been having great fun perusing student diaries from the month of March, 1900, collected in the Chest of 1900 project. I’m reading them to find the interesting, amusing, and enlightening aspects of student life in 1900. Here are a few of the tidbits I’ve found that show how much the undergraduate experience has changed since then.

The funniest bit so far is from Richard Derby’s (’03) diary. He describes a bit of a food fight at dinner:

The idea of playfully launching bits of food at our friends wouldn’t be unimaginable to students today– it’s the presence of a tablecloth that seems almost inconceivable!

And continuing on the subject of undergraduate life, I find the last sentence from Harrie Chamberlin’s (’01) dairy entry on March 2th, 1900 more than a little startling: 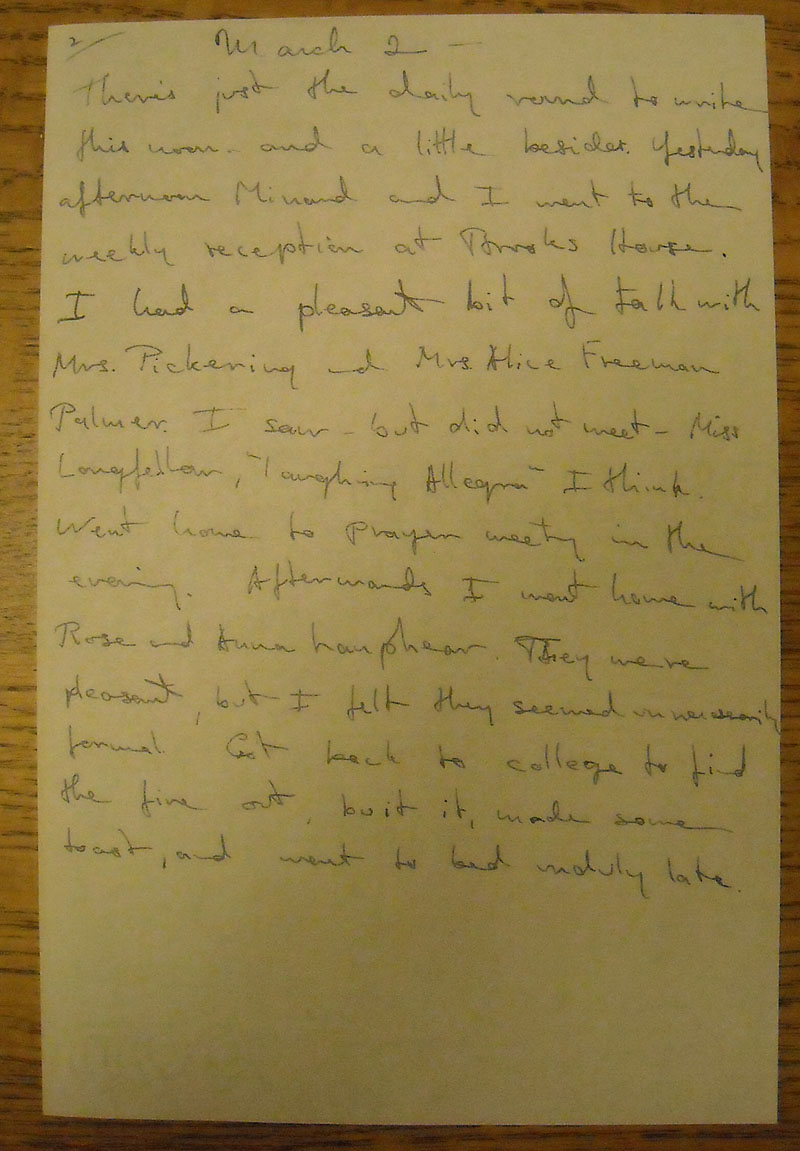 I have a fireplace in my room, too, but I take for granted that it’s inoperable, long-since sealed over due to safety or energy concerns. In fact, I imagine most undergrads wouldn’t tolerate the hassle involved with maintaining a fire for warmth! We get up in arms enough about the heating systems in the houses laying dormant when we’re a bit chilly. In this case, it’s the stark difference between daily life in 1900 and in 2009 that shocks us.

Not just structural, but social changes have of course occurred as well.  Mr. Lane, the College Librarian who requested all the diaries, kept a journal himself when a group of Cubans visited Cambridge in the summer of 1900. The anti-Catholic attitude of some people at Harvard becomes apparent from his notes. He says:

“Mrs. Gulick is very much annoyed over the fact (as she states it) that the Catholics are taking to themselves the whole credit of the Cuban summer school and have told people that the President is a Roman Catholic and have spread the impression that the College is practically a Catholic institution… Certain Catholic societies to keep open and provide for a waiting room in Harvard for men and in Phillips Brooks House for women and they have called these places salas catolicas. It has been a mistake, it seems to me, to allow this name to be used, but it can hardly be changed now.”

The obvious tension between Catholics and non-Catholics would seem out of place on today’s campus– student groups and organizations disagree all the time, but generally avoid the adversarial attitude implicit in this quote.

Despite the clear changes in undergraduate life, in another entry Harrie Chamberlin manages to convince me that students in 1900 weren’t so different from us after all. Take a look at a paragraph from his March 9th entry. 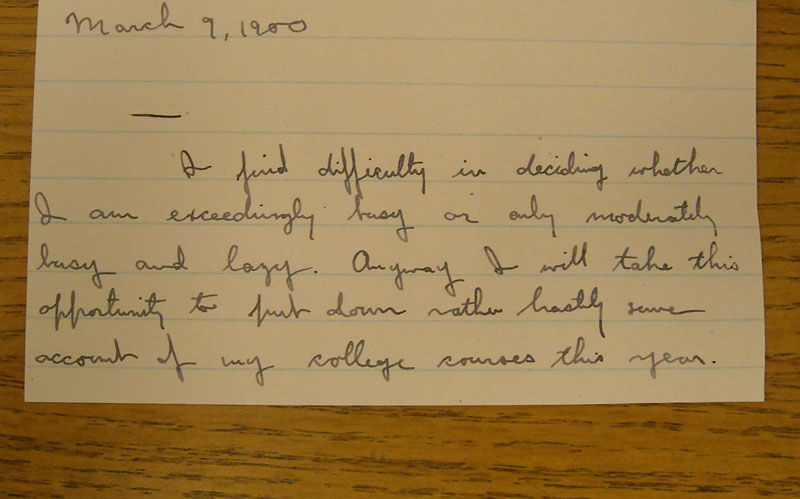 He says, “I find difficultly in deciding whether I am exceedingly busy or only moderately busy and lazy.”

In this case, the similarity between 1900 and 2009 is shocking. I can imagine this very sentence coming from practically any of my friends or roommates. I might even venture to say that packed schedules, deluges of homework, and excessive procrastination are defining characteristics of the undergraduate experience. Furthermore, we love to talk about this busy/lazy dilemma amongst ourselves– how much homework one has and how little homework one has done are probably the most popular conversations on campus.  As much as our day-to-day experiences of College life have changed since 1900, then, perhaps our attitudes haven’t!