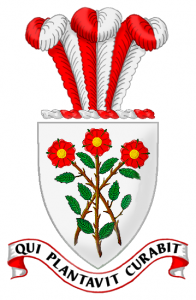 The family crest of Franklin Delano Roosevelt; the three ostrich feathers are very similiar to those born by the English heir-apparent.

For over a year now, we been searching for some sort of logo for the Foundation. We’ve thought of many different options, only to discard them one by one: too impractical, too difficult to reproduce, to expensive to commission… etc. etc. Then, the other day, I came across a mention of  a Roosevelt family crest, which I  hadn’t even known existed. It seems my ignorance of Rooseveltian heraldry was not for lack of trying on FDR’s part: our 32nd President was hugely proud of his family heritage, and it turns out he took every opportunity of plastering the Roosevelt arms everywhere he could: escutcheons over the fireplaces in the library at Hyde Park, on personal bookplates, on the White House china, on official presents to visitors (including the Queen of England) even on the very first gift he ever gave to Eleanor: a ring, with family crest, when they were engaged. I became intrigued. What did this mysterious crest look like? A bit of research pulled it up, thanks to the American Heraldry Society. You see it here on the left in all its gaudy glory.

These rather regal arms are descended from a much simpler set, those of FDR’s presumed Dutch burgher descendants, the Van Rosevelts, of Oud-Vossemeer, Netherlands, which originally featured three heraldic roses in a field of green, over a rampant lion in brilliant crimson. (There is some on-going debate as to whether or not this particular coat of arms rightly belonged to the American branch of the Roosevelt clan. See the next link, below.)

The original Van Rosevelt crest, which may, or may not, have actually belonged to FDR's line. It was in any case adopted by the Roosevelts in New Amsterdam.

In any event, once arrived in the colony of New Amsterdam, the Roosevelts proudly assumed heraldic arms, and somewhere along the line, this symbology was modified: the lion disappeared, and the three roses became a rose bush in a greensward. In addition, the Latin motto, “He who has planted will preserve” was adopted. (The translation is a little awkward, but makes sense in the original. The word curare has a general meaning of “to save for the future” in Latin, and combines elements of both our English “cure” (as in sausage or paint) “cure” (as in heal the patient) and preserve (as in protect.) The crest is what’s known is a canting, or visual pun: the name van Rosevelt means “from the rose field” in Dutch. This crest with the rose bush is the one Theodore Roosevelt and his family used, and FDR could have done the same. Unlike the English, who insist the second and subsequent sons of the family make small changes to their personal crests to acknowledge primacy of the eldest’s line, the Dutch allow male lineal descendants to adopt the same crest without alteration.  But no: always interested in setting himself apart, FDR modified his family arms to show three cut roses instead of the pattern TR had used.

(You can see both crests side-by-side, as well as the complete article on the Roosevelt family arms, by clicking HERE.)

This fascinating foray into heraldry got me to thinking. As our famous president-resident was so fond of his arms, perhaps, I thought, something similar might be appropriate for the Foundation… 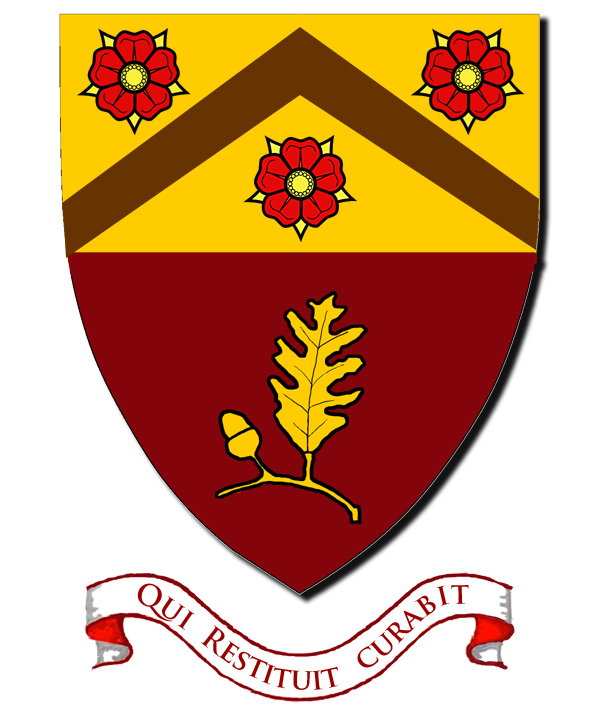 Hmmm. A bit of playing around with various designs, and two days of holiday time and about 40 iterations later, may I introduce to you the new FDR Suite Foundation crest!

The  design (which eliminates the more, shall we say, ostentatious elements of Roosevelt’s arms  – I thought we might get laughed off the block if I tried to include those royal feathers) takes its divisions from the original van Rosevelt family crest, and combines the three red roses from FDR’s arms (flowers here have symbolic thorns to replace stems), along with the famous acorn and oak leaf of Adams House (itself derived from John Adams’ seal ring.) The gold recalls our Gold Coast history, and the Crimson, Harvard’s. The brown chevron is another canting, reminding us of the other half of the FDR Suite equation: Lathrop Brown, FDR’s roommate at Groton and Harvard & lifelong friend.  In heraldic language, the description reads: (if I got this right) –  party per fess or and gules a chevron brunatre between three roses proper barbed of the field above an acorn and oak leaf of the first, which hopefully means “a blazon divided into upper and low halves, gold on top, crimson on bottom, separated  with three roses in their natural color (proper) separated by a brown chevron above, and a golden oak leaf and acorn below.” Whew!

Finally (and here as a classics major I am on much more solid ground) the Latin motto has been changed slightly to reflect our mission. It now reads: He who has restored, preserves.

There are still a few tweaks & refinements to be made to the design, but I’m thinking this is going to work out just fine: a fascinating blend of Roosevelt and Harvard history, crafted and reshaped to benefit the future of both.