For those of you who enjoy time travel stories, one of the very best is Time and Again (1970) by Jack Finney. I won’t bore you with a detailed synopsis; suffice it to say that the Federal Government discovers it’s possible to travel in time by simply willing yourself back through history. The trick is that to achieve this temporal separation, you truly have to believe yourself back in time – no mechanics are involved, simply a type of self-hypnosis. So the Government sets up several experiments in places that haven’t changed much through history – one in Paris right around Notre Dame for the Middle Ages; one in a now deserted Vermont farming village returned to its 1920s bustle; and one in the Dakota, the famous apartment building in New York City for the 1890s – all in an attempt to steep the participants in the past. The various would-be time travelers experience the life and language of the age; dress the part, eat the food – in essence they do everything in their power to make themselves believe they are inhabitants of another time. I remember reading this book when I was a child, utterly fascinated.  (It’s also an illustrated novel, which helps when a kid.) One of the passages I remember most vividly is when the main character, Simon Morley, visits the Smithsonian to view the costumes of the 1880s. The curators remove one of the ladies’ dresses from the collection, and show it to him. The material is dark brown, slightly frayed, smelling of age; he touches it, the fabric crumbles. Then suddenly, he is presented with a new version of the same dress on a mannikin:   “Martin snapped the covering from the next figure, and there stood – I won’t call it a dress but a gown of bright wine-red velvet, the nap fresh and unworn, the material magnificently draped in thick multiple folds front and back. The bead trim caught the light, glittering a clear deep red, shimmering as though the garment were moving… It was spectacular…

“Can you see an actual breathing woman Si, a girl, wearing this and looking absolutely great?” And I said: “Hell, yes: I can see her dancing!”

Well, ladies and gentlemen, we’re almost ready to dance ourselves, in the Suite. The last of the draperies arrived today: (You can click any of these photos for a larger, clearer view.) 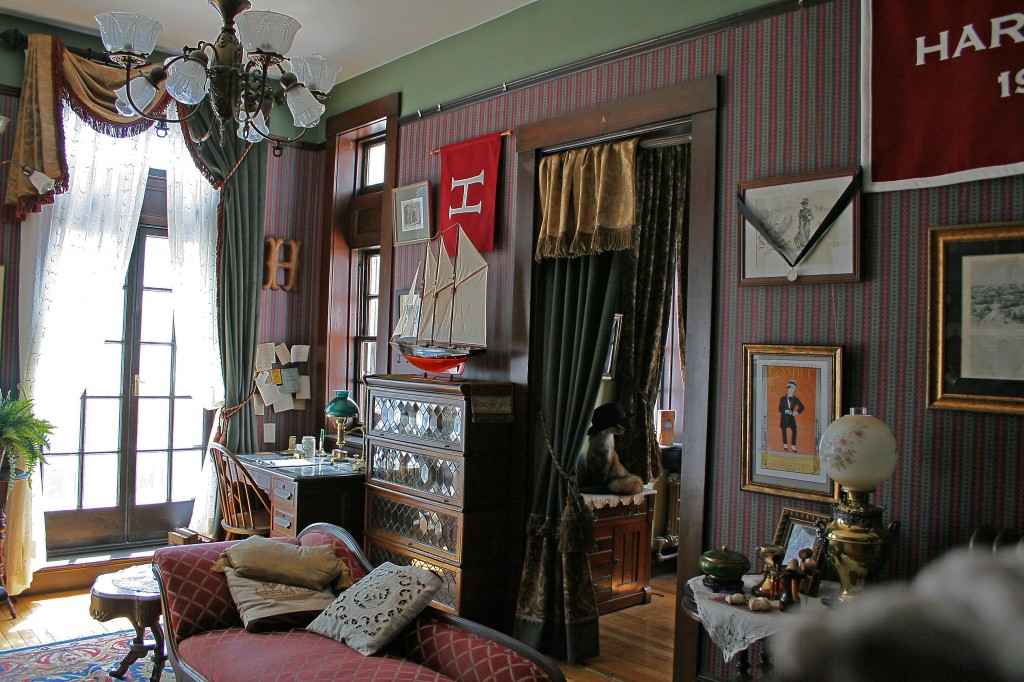 It’s amazing the impact the fabric has had on the space: where there were formally white walls and bare doors, now riots of color compete and play – surprisingly successfully –  providing a first real sense of the opulence these rooms once possessed. The portieres (the fabric in the door frames) add a lot of character; originally used to close off the rooms for additional warmth, by FDR’s time they were entirely Victorian vestigal bits of decoration. Sara had insisted… and FDR acquiesced, though he often wished they’d been set just a bit taller for his tall frame… Just behind can be glimpsed the new drapes in FDR’s bedroom; a future president can now sleep soundly in richly muffled darkness. 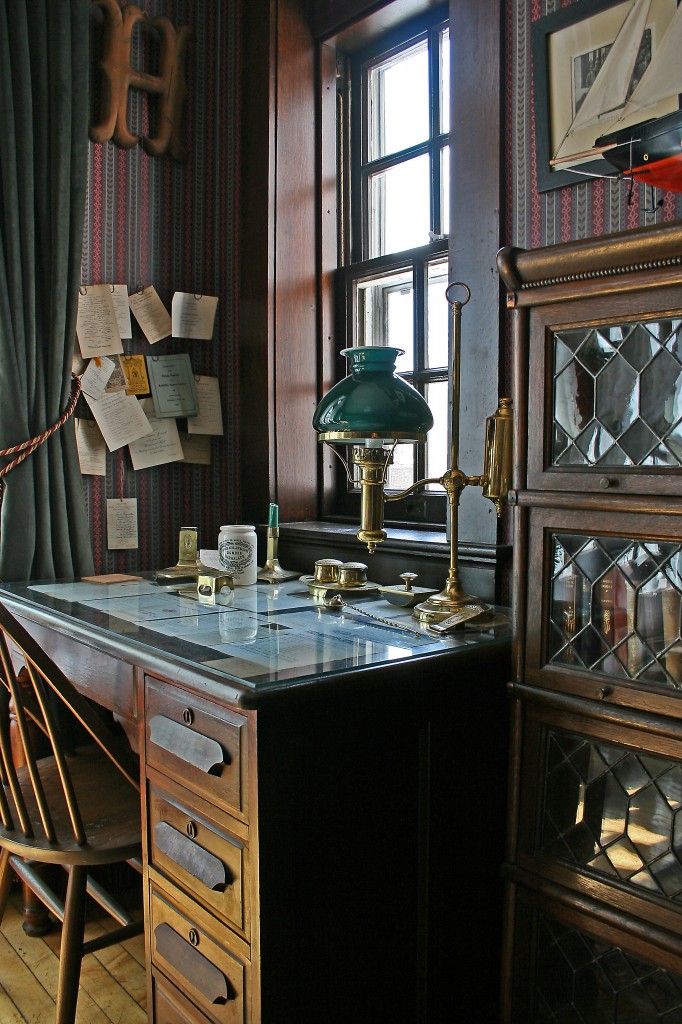 Lathrop’s desk too has come alive, gleaming with brass. Can’t you just see young Lapes, his handsome brow bent over a sheet of heavy cream writing paper, answering one of his many house party invitations, as a dance card on the wall, souvenir of some now forgotten ball at the Somerset, pirouettes slowly at his elbow? The lamp on the table, by the way, originally oil, is one of the famous “Harvard Lamps,” providing “superlative light for scholars” according to an ad from a local newspaper. Lapes never cared much about that, but he has to admit it has come in quite handy for all his social correspondence. 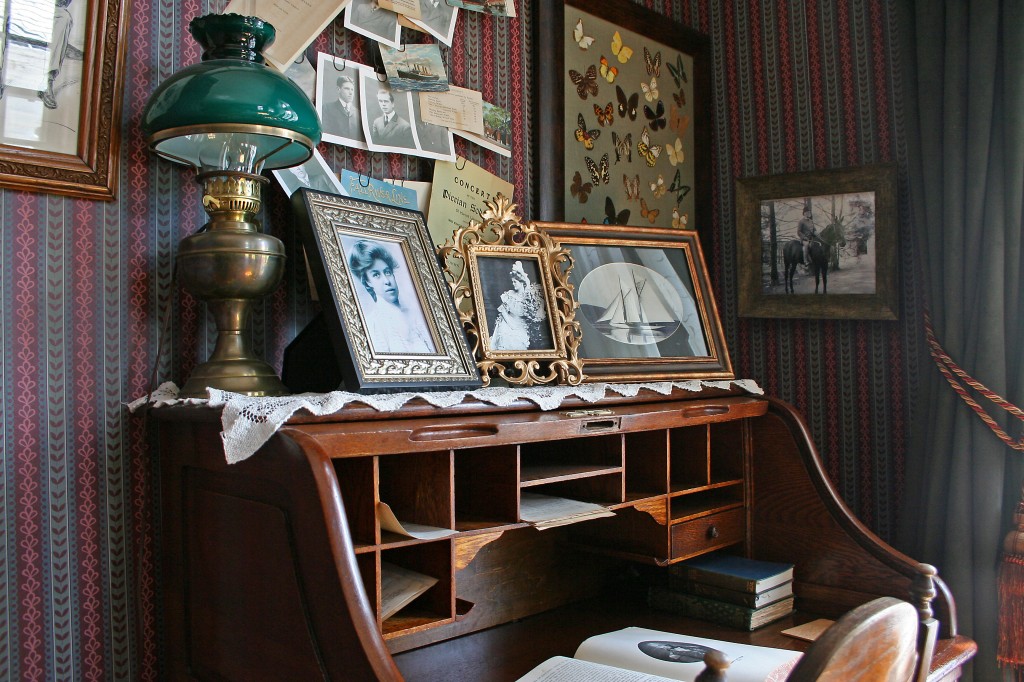 And just behind, FDR’s desk, piled high with the loves of his life: Eleanor at left, as she looks this warm May of 1904. Less pleasant memories are next: dear, dear Alice Sohier, who’d unexspectedly spurned him. (He’d better put that picture away now…) The Half Moon II at full sail, at Campobello,with FDR at the helm, and on the wall, his father, James, shortly before his death, mounted on one of his favorite trotters. And Sara too, as always, is present; the butterfly collection she sent him smiles from the wall; plus,  an unanswered letter awaiting his reply sits tucked in one of the roll-top cubbyholes.

Do you think, perhaps, if I just concentrated hard enough…