We at the Foundation are happy to relate that Mr. Curtis Roosevelt has landed in Boston, via an 18 hour trip from Western MA through 1.5 feet of snow!

No matter. The Roosevelt stamina lives on. Here’s Mr. C. R, 1/2 hour off the gate, and thrust into a studio at WGBH’s Greater Boston.

See you all Saturday at 4:30, at Adams House

Curtis Roosevelt, eldest grandson of FDR and our guest speaker for the Third Annual FDR Memorial Lecture and Dinner has announced that he will be discussing Past as Prologue: FDR, Obama, and the Perils of First Year Politics. This looks to be a fascinating topic, and we are absolutely thrilled to have Mr. Roosevelt come all the way from France to address our gathering this year.

In terms of updates, tickets are now on sale online. Click HERE to order. Tickets to the Roosevelt table can only be obtained by calling the HBO at 617.496.2222. Announcement to the general alumni population, and to the population at large, will begin next week, so remember all tickets are first-come, first-served, and only 180 are available for the dinner.

Also, both the Charles Hotel and the Mandarin will close our their special rates the 27th of January, so anyone looking to make a night or weekend of it, please book now by clicking HERE

Finally, for those of you who know of, or perhaps even remember, how bad the food was at the FDR White House, and have expressed some concern on this matter, rest assured we’re cooking up a fantastic 5 course menu of Nouvelle American Cuisine, themed to State Dinners, past and present. This will be the one and only part of FDR’s past we’ll let sleep, and if the food is anywhere near as good as the fantastic meal last year, you won’t ‘be disappointed.

On a personal note, I’ll be heading off on a lecture tour next week until early February (yes, I do have a day job, lol) so things may be a little quiet here for a bit, and your correspondence may take longer to answer. But rest assured, preparations are well in hand, everyone at the Restoration is working away, and we are totally excited to welcome you all to Cambridge in February. 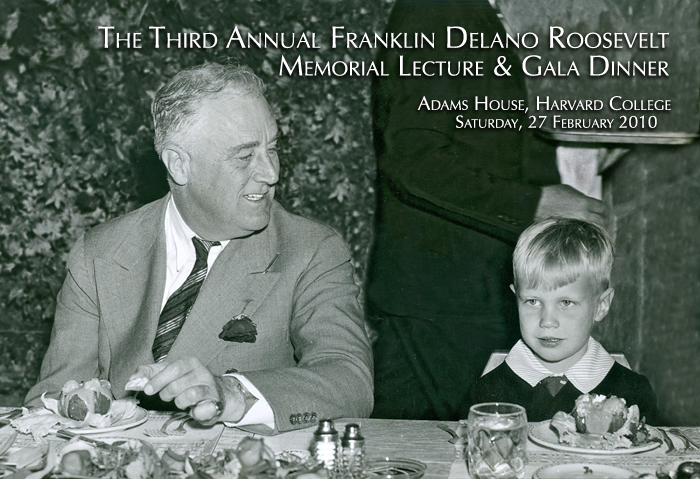 Good news! Advance tickets for the February 27th event will be available starting tomorrow 1/7/10 at noon EST at the Harvard Box Office. While online sales won’t open to the general public until the end of this week, you may order tickets by phone by calling the HBO charge-by-phone number (617.496.2222). I’ll post the web link when available. Keep in mind that seating is limited to 180 for the dinner, and thanks to the good folks at the Harvard Alumni Association, who are helping us publicize the event this year to the general alumni body, we hope to sell out fairly quickly, so please take advantage of this advance notice to you, our members and blog readers. (Those of you entitled to discounts must contact me directly for tickets: weishan at fas dot harvard dot edu.)

Also, just in time for April 15th: the IRS has officially granted the Foundation’s status as a public tax free 501(c)3 charity, so any contributions made in 2009 (and going forward, ahem! we still need your help!) are fully tax deductible to the extent allowed by law. We owe a HUGE round of thanks to Christopher Leich, Sara Schaffer Raux, and the entire team at Ropes & Gray LLC for their pro bono help on what turned out to be a fairly epic quest to incorporate the Foundation and set up the tax free status for our restoration and educational programs.

And finally, on the subject of donations, we’re currently soliciting contributions for our live auction during the FDR event. Non-tangible, transferable items such as vacation stays, donation of services, gift certificates, behind the scenes tours, celebrity meet and greets, club memberships, etc are ideal, so if you, or any or your acquaintances, are so generously inclined, we would be happy to receive your help. Plus it’s a great way to publicize your enterprise, and receive a tax credit to boot.

That’s all from a snowy and frigid Cambridge. More soon. 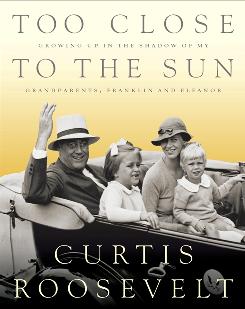 Curtis Roosevelt, FDR’s eldest grandson, will give the Third Annual FDR Memorial Lecture at 4 PM, February 27, 2010, at Adams House. His topic will be his new book, Too Close to the Sun: Growing up in the Shadow of My Grandparents, Franklin and Eleanor. Mr. Roosevelt, now 79, will be traveling from his home in Provence to speak to us.  First -grandchild “Buzzie,” as he was known, was quite a celebrity in his own right, having spent a large portion of his formative years in the White House, and this will be a once-in-a-lifetime opportunity to hear FDR history from someone who knew FDR intimately.  Dr. Cynthia Koch, Director of the FDR Presidential Library and Museum, will also be joining us for the festivities, and will be introducing Mr. Roosevelt.

Some other plans still in the formulation stage:

• a pre-dinner cocktail reception and book signing with Mr. Roosevelt.

• a live auction to benefit the FDR Suite Foundation.

• a gala dinner dance with the Bo Winiker Orchestra, Boston’s premiere big-band. This year’s theme will be “FDR’s White House. ” The dinner will be based on a State Menu from the 30s, and we’ll be counting up the years musically from 1932-1944, so get out those dancing shoes! Plans call for current Adams House students to join us for dancing from dessert onwards, and we’ll be doing ballroom refresher classes at the House on several nights prior for those of you (like me) who may want to get those foxtrot and swing steps in shape.

For non-resident guests, or for locals who simply would like a romantic weekend in town, I’m arranging two special packages: one at the Charles Hotel (a few blocks from Adams),  for those of you who prefer to be nearby, as well as at Boston’s newest luxury hotel, The Mandarin Oriental, for anyone who might want to come a night early, catch a show, shop Newbury Street, or simply indulge in the Mandarin’s 16,000 square foot spa. I hope to have details on all this, with pricing and reservation information,  here on the blog within the next two weeks.