At the last meeting of the University Council it was suggested that an attempt be made to bring together for the benefit of our successors at the close of the twentieth century, as complete a record as possible of the present daily life of the University….

Let each one during the month of March 1900 keep a careful journal of his daily doings, recording faithfully, and in as much details as he can, all that goes on from day to day, including his college work, his professional interests, his family relations, his amusements, in fact, all the elements of his life… Let him imagine that he is writing without reserve to some friend at a distance…in detail as vividly as possible, a picture of what is taking place…

It is proposed to add to the written narratives a comprehensive collection of photographs of places, buildings and rooms, and everyone is asked to contribute what photographs he can, particularly pictures of his home, both interior and exterior views…

These will deposited in a zinc-lined chest or chest, soldered up securely, locked by two different keys… to remain absolutely closed until 1925… with no general use of the records…earlier than 1960.

And so began the letter that saved the FDR Suite Restoration Project; for without this turn-of-the-last-century effort to compile a time capsule by the University, today we would have almost no knowledge of student rooms or student life of 1900. Fortunately for us, Lane’s call to arms, dubbed the Chest of 1900, was generally well received by staff and students: In response to this plea, Julian Burroughs, ’01, an avid member of the Camera Club, set off to photograph interior and exterior scenes of Harvard. These shots have provided most of the information on period furnishings and decor you’ve seen on the fdrsuite.org site, and form the base guide for our Restoration in absence of actual period photos of the FDR suite. In addition to this trove of pictures, the Chest also contains many volumes of journals, letters, diaries and other ephemera, which Nina Ranalli, one of our student researchers, is now sifting through to give us a more thorough picture of undergraduate life during FDR’s time at Harvard.

In looking through this invaluable collection, and realizing how completely we rely in it for information, two things immediately come to mind. The first is a prayer of thanks that responses like this one – also found in the chest – weren’t general:

I’m afraid Mr. J Winthrop Platner, despite his grand signature (which is really swell!) loses that round to history.

What’s truly scary is the realization that future generation of scholars won’t have the benefit of William Lane’s forethought. The University’s record of student rooms, for instance, is paltry for the period before 1900; occasional at best for the teens and 20s; a bit more flush from the 30s with the construction of the Houses; then it tapers off dramatically. The 70s and 80s are almost entirely blank.

The University too, is alarmed, and is actively trying to fill in the gaps (see below) though with what success I don’t know. With the FDR Suite, we’ve relied on the Victorians’ collecting mania, especially their fondness for scrapbooks. Without the various Harvard student scrapbooks stuffed full of theater programs, notices for athletic events, photos, ticket stubs, etc., we would very much out of luck.

What then is the permanent ephemera (if I may be pardoned that oxymoron) of today’s email age? 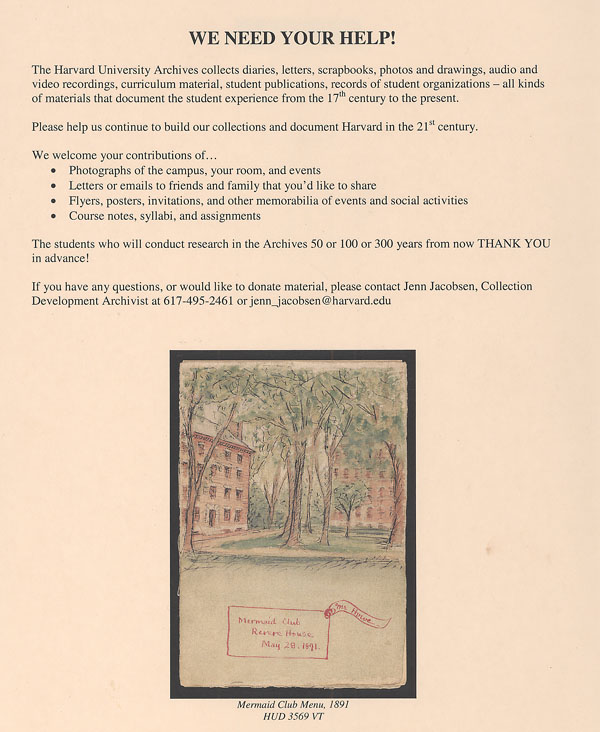 I don’t know about you, but I’ve decided it’s high time to go through my files and dig out those old photos, letters and other bits and pieces from my student days, and send them off to the Archives. No one will see them for a while (the records remain sealed for your lifetime) but that’s just fine by me. If some future historian owes me the tiniest fraction of what I owe William Lane and his Chest of 1900, I will feel well recompensed indeed.

The FDR Suite Restoration at Adams is a self-supporting project, and advanced only through your contributions to the FDR Suite Foundation. Please consider giving generously to support our efforts.