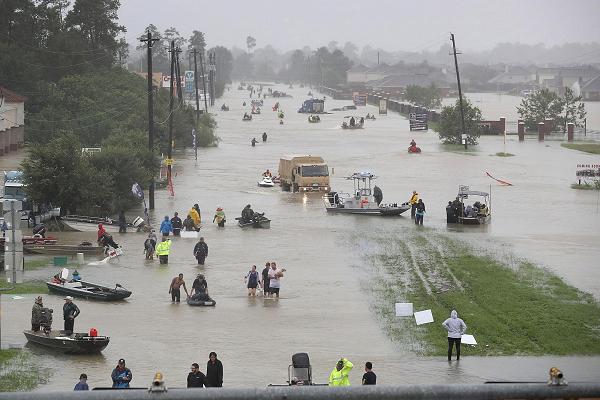 What a horrific mess. At least 30 people are dead and 100,000 homes have been damaged by flooding from Hurricane Harvey.  Aside from the humanitarian disaster, which will be intense and on-going for months, the damage to the environment is almost incalculable. Billions of gallons of water, mixed with practically every poison man can produce, is flushing its way across Houston and into the Gulf — so toxic, in fact, the authorities are advising people to throw away any clothes that have come in contact with the water. Then, when the floods recede, the polluted debris from 100,000 houses will probably be land-filled, and afterwards the immense carbon-cost of rebuilding.

Could this tragedy have been avoided? The answer is categorically yes, as much of the disastrous flood damage in Houston is man-made.  Let’s start with the egregious fact that our 4th largest city has no zoning laws. Anyone can build anything anywhere, say for instance, a toxic chemical plant in the middle of a flood-prone residential zone. Worse, unbridled construction has caused former green areas that could have absorbed critical quantities of rainwater water to be paved over. According to a report at CNBC, between 1995 and 2011 Houston has increased its paved surface by 25%, meaning that any rain that falls on a city already built on clay soil will run off to increase flooding somewhere else, translating into roughly $4,000 of extra flood damage per square meter of pavement. Add to this a population that has been growing by 90,000 people a month, with an expected increase of 4 million in thirty years, and you have one huge and growing environmental nightmare.

Aside for the urgent need for zoning laws, there are other remedies that would help in future crises, but it would take foresight and forceful leadership on the federal level to bring them about, two qualities notably absent in Washington these days. In fact, just a few days before the arrival of Harvey, Bumpkin-in-Chief used an Executive Order to roll back the Federal Flood Risk Management Standard put in place by President Obama, which mandated that infrastructure in areas prone to flooding be designed to withstand the increased impact of climate change. Trump’s rationale for this seemingly irrational act was that flood rules “slow down” infrastructure creation, apparently believing that the federal government should simply rush projects to completion in order to create jobs, and if they wash away, all the better, because that translates to more jobs to put them back again. It’s a simpleton’s thinking, which risks lives and squanders our tax dollars.

Perhaps the most potent tool in the arsenal of change would be for Congress to get serious about fixing the National Flood Insurance Program. Currently 24 billion dollars in debt and teetering on the brink of bankruptcy, this 50-year-old program dates from a time when few private insurers were interested in providing flood insurance, due to the actuarial uncertainties in predicting where and how often an area might flood. Since then however, owing to satellite imaging and other advanced technologies, the Federal Government has developed highly accurate flood maps that allow for precise predictions of risk,  opening the market for private insurers. Yet despite being at the point of insolvency, the National Flood Insurance Program continues to provide flood coverage well below market rates, essentially encouraging building and development in known areas of flooding. Worse, the program allows for repeat rebuilding on a site. If a structure washes away, federal dollars rebuild it. If it washes away again, it is rebuilt again, with your tax dollars. Only after the fourth flood is some type of mitigation required, usually in the form of raising the structure, which is again re-insured by the federal government. Obviously, this is ludicrous, especially in an era of increasingly intense storms due to climate change. As the Flood Insurance Program is set to expire on September 30, now would be the ideal time for Congress to act in a bipartisan fashion and change the law, along the lines of the Biggert–Waters Flood Insurance Reform Act of 2012, which was unfortunately diluted in 2014 by subsequent legislation. First of all, premiums should rise to full market rates, with discount provisions for low income residents. Secondly, vacation homes should be entirely excluded from federal coverage, and most importantly, pay-outs should only be allowed once per property, and be made portable, meaning that the owner is not obligated to rebuild on the same site. If a home or business is flooded, the owner would receive a payout and be encouraged to build on higher ground. If the owner disregards this advice, then he or she will need to find insurance on the private market.

It’s high time the Federal Government got proactive about protecting its citizens from the ravages of flooding. In FDR’s era, the Flood Control Act of 1936 tried to build its way out of the problem with dikes, levees and spillways, which we know now isn’t the answer.  Instead, it’s time for enlightened federal policy to promote ecologically sensitive rebuilding and buyout programs, programs that demand a change in human nature, not mother nature.

Because in the end, we know who always wins…