“The study furniture was two desks and chairs, a large day bed, a piano and two casual chairs. FDR sang 1st bass on the Freshman Glee Club (I, 2nd bass) which is part of the justification for the piano” Lathrop Brown to Master Brower, 1958 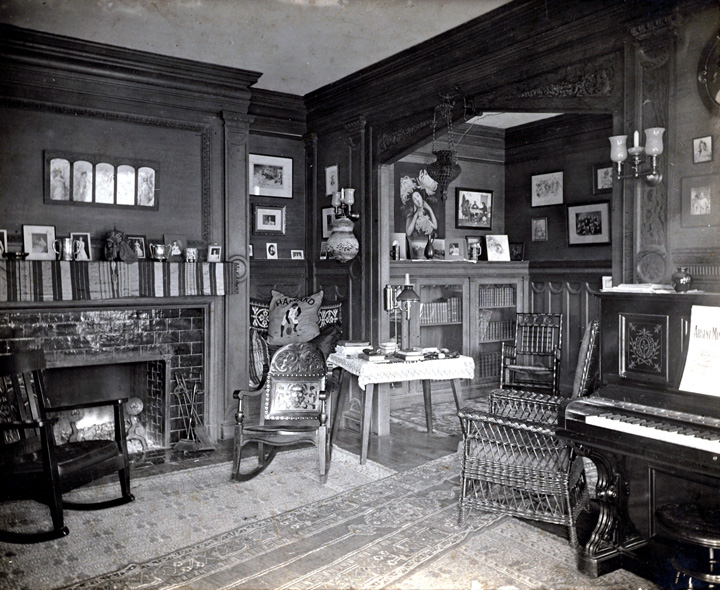 As we begin to gear up furnishing the Suite, we’ve started the search for an upright piano. While we don’t know precisely what FDR’s piano looked like, we can make a good guess. The picture above comes from just down the hall, in what’s been called the Vanderbilt Suite, B-22. These rooms, which are unique in Westmorly, were customized for William K. Vanderbilt Jr’s  second (and last year) at Harvard by the building’s architect – and Vanderbilt cousin – Whitney Warren, as this 1898 article from the New York Times attests: 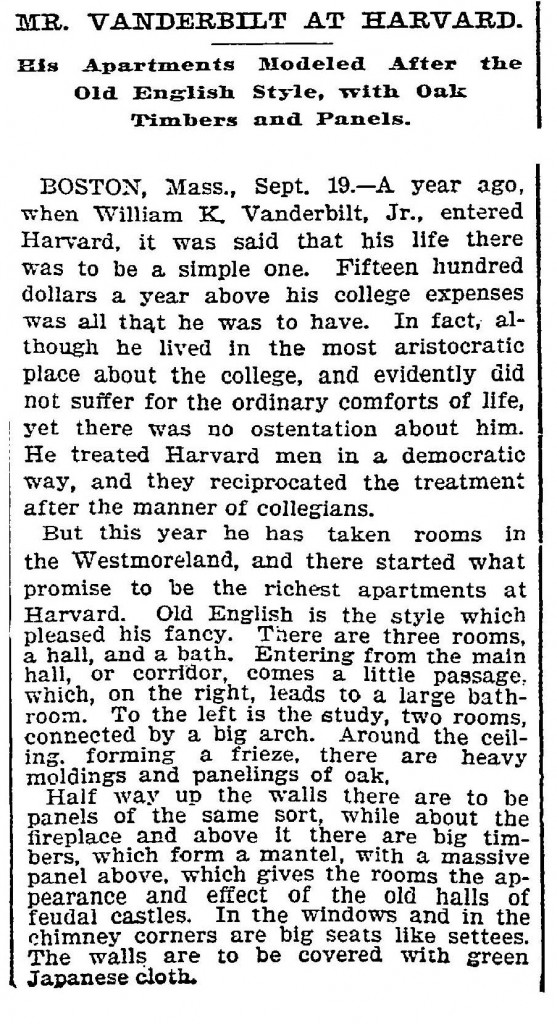 The chronology of our photo is a bit uncertain; given the richness of the decor, we’ve always presumed it was taken the year “Willie K,” as he was known at Harvard, was in residence. But the music on the piano, identified by our friends at parlorsongs.com, turns out to be the The Absent Minded Beggar, published 1899, leaving scant time for this picture to have been taken while Willie was in residence. The Vanderbilt heir had left Harvard to be married by March of 1899, and as most of  the other Burroughs pictures were taken in May of 1900, it begins to seem likely that this view reflects the furnishings of the next, if perhaps less famous, certainly equally opulent occupant.

No matter. This Times article, which I just tracked down today, at last confirms the color of the wall covering! This is a great discovery, as a similar treatment is a potential candidate for one of the FDR Suite bedrooms, and we can now establish with certainty the color scheme…

But, I digress – as is so common in historical ramblings like these – from the main topic at hand, the piano…

The piano in the Vanderbilt Suite was an Ivers and Pond, and judging from the many ads found in the Crimson for piano rentals in this pre-Victrola age, Ivers and Pond, a Boston manufacturer, was the leading supplier to Harvard students of means.

Thus, we’re now in active search of an Ivers and Pond upright piano dating from between 1895 and 1900, and we need your help! This kind of instrument normally runs in the $2000-4000 range restored, and periodically surfaces at various NE retailers and on Ebay; an instrument like this would make a fantastic individual or institutional contribution to the FDR Suite, which we would gladly commemorate with a small plaque. And of course, the gift is fully tax deductible.

Won’t one of you consider returning the gift of music to these historic halls?

5 comments on “A Project in Search of a Piano – And a Donor – Plus, A Discovery!”