How’s this for an elliptical tale: I was sitting last evening in FDR Suite, attending a small get-together hosted by Claire Mays, ’81, who’s our first guest since the Suite was sufficiently completed to lose its air of camping. There were nine of us, and we were sitting around in an odd allotment of chairs – our comfy Morris chairs, of course, plus the new settee, but also a clustering of small wooden period chairs to accommodate the extra company, It struck me as I looked from smiling face to face that this is very much how the room must have appeared when Lathrop and Frank had a few friends over to sit around the fire sharing a couple of beers. (We on the other hand were sipping a rye-based period cocktail that Claire had discovered somewhere and kindly attempted to resurrect. If the general reaction of my fellow drinkers was any indication, this is one revival that probably won’t gain steam any time soon. No matter; it’s the thought that counts.) But to return to my story: there we were with the gaslights aglow, cozily ensconced against the wind and wet of a rare August Nor-easter, when one of the guests asked me if any of the items in the room actually belonged to FDR. The answer, I replied, was no – while every item in the Suite is either attested from documentation, or presumed from similar period rooms, the sad fact is that we don’t have anything from FDR himself. We come close – personal items from his classmates, publications from the period, etc, but nothing we know that FDR actually possessed. In fact, there’s remarkably little surviving from that period that can be absolutely known to have been in the Suite: letters home certainly, but not much else, except one very interesting book: FDR’s line-a-day diary.

This intriguing item, now at the FDR Presidential Museum in Hyde Park, was kept intermittently by FDR for years. It’s a handy little system, really – you just dotted down a note or two each day in a pocket-sized book, and soon you could look back and see what had been going on in your life that same date, one, two three, four years back. The interesting thing about FDR’s volume is that several of the pages were written in a private code, as you can see for the entry of 1903: 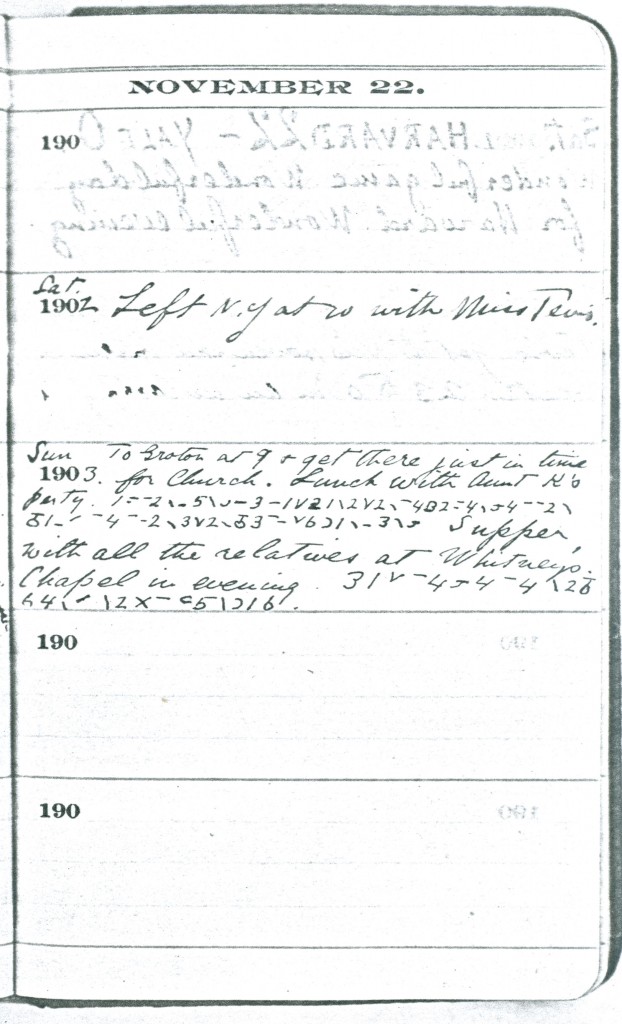 The text reads: “To Groton at 9 & get there just in time for Church. Lunch with Aunt K’s [Aunt Kassie, Mrs Price Collier] party.” Then comes the code, followed by: “Supper with all relatives at Whitney’s. Chapel in the evening” and then another coded sentence. The coded parts were not deciphered until the 1970s, when a researcher at the Archives, Nona Ferndon, first noticed them. It was eventually discovered that the code that FDR used substituted numbers for the first five vowels (1 for a; 2 for e; 3 for i, 4 for o, 5 for u, and distinctive portions of consonant letters for the the letter itself ( ¬ for T, – for H, etc.). The sentences can now be read as: “After lunch I have a never to be forgotten walk with my darling.” & “And I am going to New York next Sunday.”

So why all the mystery? La romance, toujours la romance: this was the day that FDR proposed to Eleanor at Groton,  and surely expecting maternal opposition, our president-resident decided for the moment to keep his thoughts secret. (Does this imply FDR feared Mama reading his diary? We know not, but Sara was not told until the week following, and made her opposition perfectly plain when informed.) The other, earlier coded entries also deal with a love interest; this time though, it was directed at Alice Sohier, who had turned down FDR the year previous, and who in sailing off to Europe, eventually sailed into the arms of another beau as his first lady, albeit of a far less famous kind.

OK Michael, I hear you say, all this cyclic narrative is most engaging, but what’s this got to do with the Suite? How are you so sure that this particular book was there? Well, look at the first entry for 1901. You may think that’s some kind of code as well, but what you’re really seeing is bleed-through from the next page. Flip the paper, and it says: “Sat. November 23 1901. HARVARD 22 – YALE 0. Wonderful game. Wonderful day for Harvard. Wonderful evening.”

Can’t you just picture our sophomore FDR at his desk in the Suite, penning that little note?

Well, I can assure you it’s certainly much easier now, with the renovations 3/4 completed, sitting around the hearth with a few new friends…