(Editors’ Note: This inteview first appeared in Michael’s FDR Suite Restoration Blog, and is the launch epsisode of The New Fireside Chats, a series of webcasts from the FDR Suite which will feature leading figures in the worlds of politics, history, art, and culture. On the docket are historican Doris Kearns Goodwin, Harvard Professor and PBS Host Skip Gates, and Nobel Laureate economist Amartya Sen. Stay tuned!)

To summarize Mr Dean’s life in a paragraph is to conjure a passage from some James Bond novel. Born in the last days of the Weimar Republic to a wealthy Jewish family, Dean fled to the US from Germany after Kristalnacht. Growing up in Kansas City, he entered Harvard, became involved with a top secret intelligence operation during WWII, returned, took his diploma (plus several more, including a law degree from the Sorbonne) and then entered the US foreign service. His 30-year career including journeying into far Togo to establish the first US Mission there; brokering the peace in Laos (and preventing a coup); getting shot down in Vietnam; carrying out the flag at the fall of Phnom Penh (below, from the cover of Newsweek); surviving two assassination attempts as Ambassador to Lebanon; rescuing the Chum Museum ( a world heritage site) and speaking his mind about Israeli involvement in Pakistan, which ultimately cost him his career in the US Diplomatic Corps. 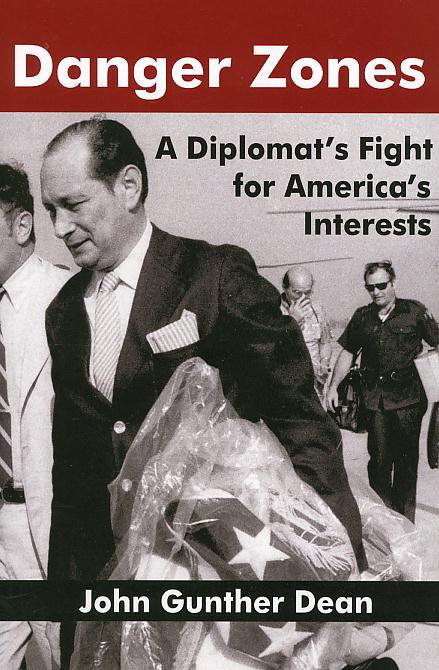 We caught up with Mr. Dean a few weeks ago, when he visited Harvard for his 65th reunion. In all honestly, I was prepared to meet an elderly man, retired and retiring, dotting on memories. There was very little of that. Mostly there was a remarkably vital, often feisty, always entertaining old soul who has known (and who has a distinct opinion of) most of the major players on the world stage since the 50s. Our interview, originally scheduled for a half-hour, stretched to an hour and a half. It’s been edited here for cohesion into three largely chronological 20-minute segments. The first covers Dean’s youth and arrival in the US, including his Harvard years and War II experience. The second picks up the first years of his diplomatic career and posting to Southeast Asia; the third discusses the later (and often far too eventful) parts of Mr. Dean’s career, as well as his reflections on the world political stage, and the value, even after 65 years, of his Harvard education.

A word or two on this first episode. The most remarkable thing about my last four years at the FDR Suite has been the fascinating host of new people, places and technologies I’ve been exposed to. The Chats project is no exception. Creating this series included moving from in front of the camera (never easy) to in front and in back of the camera (remarkably frustrating, and full of hidden shoals, not to mention a post-production staff of…. one. Where’s my latte! Get it yourself, fool!) This first episode bears witness to my newness at this game, and has shown the way for many future improvements, including some annoying sound issues here and there. Still, I think that considering this was our first time out, we pulled off a remarkably professional interview. The “we” here, by the way, is cameraman Joe Brancale, ’13; our own Adams Drama Tutor Aubry Threlkeld (whom we gratefully drafted as cameraman when our film students had all departed for summer); Annie Douglas, ’12, who pitched in to help with logistics; and our inimitable Tim Smith, ’08, recently Timothy John Smith, Esq., (congrats) who will be hanging out with us one more year (thank god for that!). Plus, our ever patient Masters, Judy and Sean Palfrey, who appeared in loco clientis during our first video trial runs, and who believed enough in this project to shepherd it through. Bravo to all.

Thus, may I present to you, from the (almost) restored FDR Suite, The New Fireside Chats, Episode 1: (Note: If you’re having trouble clearly viewing the video on the FDR site, you may also watch the Chats directly on the vimeo site, here. You will need a fast internet connection, and updated computer, in either case.)