When I first came up with the idea of starting an Adams House alumni magazine 8 years ago, there were the usual number of nay-sayers. “Oh, there will never be enough content to sustain it.” “How many people will read the thing, anyway?” “Who is going to staff it for free?” The answers to those questions proved to be, in order of asking: “we have access to almost unlimited content as there are 400 talented new Adamsians every year”; “some 6000 readers annually”; and finally, “there will always be dedicated alumni willing to volunteer.”  This last has thankfully proved to be the case, as Sean Lynn-Jones (tutor ’84-’92), Claire Mays ’81, and Christopher Alessandrini ’15 have given immense amounts of their time and energy to produce past issues. Still, I remained the nexus, and that was problematic, for as the Foundation has grown exponentially in size and programming, my ability to juggle so many balls became compromised, and last year we didn’t get out our 2017 annual issue, which was entirely my fault. 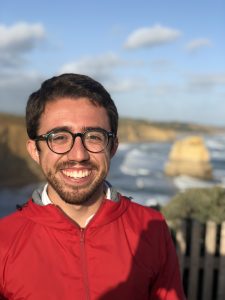 Fortunately, the cavalry has come to the rescue in the form of Santiago Pardo Sanchez ’16. We first met Santiago way back in the Autumn 2013 issue, when he was profiled as an up-and-coming sophomore. Since then he’s graduated with honors, completed a Peace Corps assignment in Vanuatu, and now is eying Marco Rubio’s senate seat. (In a few years’ time, of course.) Meanwhile, he has volunteered to become our managing editor, promising to breathe new life and new features into the Gold Coaster. I can think of no one more capable. An avid student of the late Roman world, Santiago was Adams House Committee chair in 2015, and while in that capacity organized and catalogued the extensive Adams House Archives, in addition to working assiduously to restore the Adams Library book system to its 1930s glory. I am honored to call him a friend, and truly delighted to place the management of the Gold Coaster in such knowledgeable hands, as no one is more familiar with Adams than he. I’ll still retain the title of editor in chief, but I fully expect that role to become one of an advising, contributing, and almost certainly, applauding nature, as future issues appear.

So, my dear fellow Adamsians, to the changing of the guard: I give you Santiago Pardo Sanchez!

Take it away, Santiago!