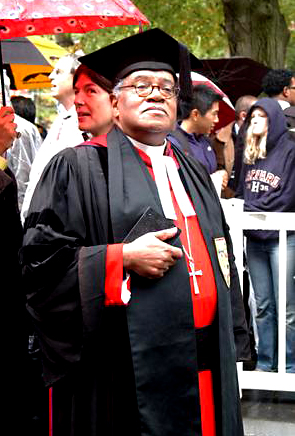 This past August, for the first time since I can remember, there was no Reverend Gomes to welcome the incoming freshmen. Of course the newly minted Class of ‘15 didn’t notice the gap, but for those who had known the man, his absence was palpable. A Harvard Personality with a capital P, Gomes’ wry sense of humor, his passion for the University and its traditions, his entirely inimitable manner of speaking, his innate story-telling ability with its uncanny ability to thread the most disparate events and unexpected characters into a cohesive tale – all these traits were, like the man, truly one of a kind. Who present at the Adams 75th Anniversary celebrations could forget his invocation,where, rather than giving the standard prayer for those present, he chose instead to bless his own house, Lowell, calling on the Divinity to make its occupants less boring and drab, praying that they might receive a mere fraction of the spirit, creativity, and raucous fun that that he’d witnessed at Adams all these years?  The crowd simply roared with laughter. Settling in to listen to Reverend Gomes (and settling in was indeed required, as brevity wasn’t one of his sterling traits) you never knew precisely where you were going, but you always knew that when you finally arrived there would be a razor sharp moral lurking within his soft, almost British cadences, as when he was addressing the subject of Harvard and race in the New Yorker:

“It seems that when Elliot Perkins, the great-grandson of John Quincy Adams, was an undergraduate at Harvard, he decided to become better acquainted with George Washington Lewis, the formidable black steward of the Porcellian Club. So one day Elliot began to make conversation and asked, ‘Mr. Lewis, when did your people come up North?’ To which Lewis replied, ‘Mr. Perkins, my great-grandfather fought in the Battle of Bennington, which is in Vermont, as you may know.’”

He will be much missed.

Departed too this fall, though happily in a far less permanent manner, is our dear Master, Judith Palfrey. Long an advocate of children’s health, Judy was chosen to head Michele Obama’s new teen anti-obesity campaign, Let’s Move. She’ll be in Washington, given favorable political winds, for quite a while. In the meantime, co-Master Sean Palfrey, and Resident Senior Tutor and now Master pro-temps Sharon Howell have things well in hand. Still, I admit I miss seeing Judy around the House as I go about the Foundation’s business. Judy has a particular way about her, a friendly smile, a soft laugh – a certain firm assurance tinged with maternal sensibility – that paradoxically both soothes and motivates. Talking to Judy, everything seems possible (even crazy ideas like funding and restoring a stripped and empty set of rooms once occupied by a certain Frank Roosevelt, Class of 1904.) She’s such a font of energy, always spinning out new projects and ideas, that it’s no wonder she leaves a bit of an emotional void in the wake of her departure. However, I have no doubt that America’s teens will benefit greatly from our temporary loss, and that we, and Adams, will be just fine while she’s away.

And that’s the really remarkable thing about Harvard: the College truly does have a life of its own, independent of the temporary players that parade through its ivy halls. People come and go: the great, the good, even the mediocre; they live, laugh, leave, die – and Harvard continues on, and on. I find something incredibly re-affirming in that. The famous essayist Walter Lippmann, class of 1910, gave a remarkable address at his 25th Reunion that summed up this feeling perfectly:

When the burden of choice and decision and responsibility sits too heavily upon you, when the rapidity of change and the uncertainty of affairs frighten and threaten to overwhelm you, one of the best of all ways to refresh and to reassure yourself is to come back to Harvard and remind yourself that you belong forever to the oldest human institution created by the American people. Wars, panics, elections, and all the other excitement of history take on a new perspective when you remember that Harvard has survived them all.

I do not say it is the only way, but I do say it is one certain way, to remember that through all the commotion of affairs, through all the quick, the transient and changeable movements of life, there are living things that arc permanent and endure. It would be possible to say many things in praise of Harvard but at this moment perhaps the most important thing one can say is that Harvard is a place where you can, when you feel the need of it, cool your fevers and walk quietly and confidently once more.

As our dear departed Reverend would have most certainly added: Amen to that!