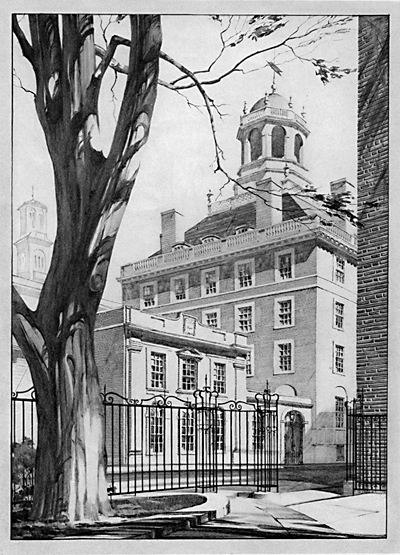 Randolph Hall and C-Entryway as envisioned by the architects
Coolidge, Shepley Bulfinch & Abbott in 19

In 1951, filmmaker Pare Lorentz had a problem. Embarking upon what he hoped to be his opus magnus, the definitive filmography of FDR, Lorentz was attempting to gather information on our 32nd President’s early years. But the sands of time were rapidly running down: 70-year old memories had grown dim, and the list of those who could provide credible insight into FDR’s thinking in those formative years was short indeed. There was however one clear voice left: Lathrop Brown, FDR’s Groton chum, and Harvard roommate.

Remarking on why FDR later became such an effective leader, Brown stated: FDR had traveled much more than most boys of his own age… He had an inquiring mind, and unlike other boys brought up like a litter of puppies in a kennel, who spent their time cuffing each other, he had plenty of time to spend on individualistic pursuits. Because of this, he was more mature in many respects than his contemporaries. His eyes opened earlier." The key here was travel: by age 15, FDR had spent nearly half of his life abroad, spoke fluent French and German, and had seen much of Western Europe: the very land he would be charged to defend 40 years later.

This year, as we at Adams bring the physical restoration of the FDR Suite to a close, it’s time to embark on another, and perhaps more significant project: the establishment of the FDR International Traveling Fellowship program. Planned as a working memorial to Roosevelt, this program would each year award a stipend of up to $8,000 per applicant to pay for an accredited academic program abroad, and then, once successfully completed, provide the student with a $3500 stipend to make up for lost summer wages. This last distinguishes the FDR Fellowships from all others: while there are already established programs for study abroad, applicants need to possess sufficient wherewithal to be able to afford the economic cost of not working during the summer in order to take advantage of them, which effectively eliminates the very neediest from participating.

As a country we were extremely fortunate in that FDR’s family had the foresight and ability to guide his education to become a true "man of the world." However, we can’t know where the next FDR is coming from, and thus we seek to expand the field of candidates to the greatest extent possible to include talented individuals of limited economic means.

The FDR International Traveling Fellowship Program would be available to undergraduates below a fixed income threshold, and would be awarded to students of any race, culture, creed (or political view – this too is important, as these scholarships will be entirely non-partisan) who wish to pursue clearly delineated goals in both the sciences and humanities that have the potential to foster cross-cultural communication and assistance in the international spirit of FDR’s Fourth Inaugural Address:

"Today, in this year of war, 1945, we have learned lessons—at a fearful cost—and we shall profit by them.

We have learned that we cannot live alone, at peace; that our own well-being is dependent on the well-being of other Nations, far away…

We have learned to be citizens of the world, members of the human community.

We have learned the simple truth, as Emerson said, that, ‘The only way to have a friend is to be one.’"

An endowment of 1.5 million dollars will permanently fund the Foundation’s operations, maintain the Suite’s collections, and provide for up to 5 FDR Fellowships per year. Additional funds, if acquired, would go to expanding the scholarship program. Scholarships will begin to be awarded once the program reaches the $250,000 mark, and will be offered first to current residents of Adams House, and then to the undergraduate body as a whole.

Our intention is to begin actively seeking this money during the next year from individuals, foundations and especially corporations that share global business and societal interests in improving the human condition around the world.

If you’d like to help us – either through direct contribution or introduction to others who might – we’d love to hear from you.

We’ve been truly blessed at Adams with every educational opportunity that money can buy, including, perhaps, the most important of all – to have been surrounded by people who led through example – and it’s high time that we, too, take up the baton and extend Adams’ proud presidential legacy throughout the world.