Over the last couple of weeks, in preparation for the launch of The New Fireside Chats, I’ve been spending an unusual amount of time at Adams, trying to overcome the steep learning curve that occurs when you move from in front of the camera to the back. (Or, more precisely, move from the front to both the front and the back.)

This has all meant that for the first time in 25 years, I was present at the House for an extended portion of Senior Week. 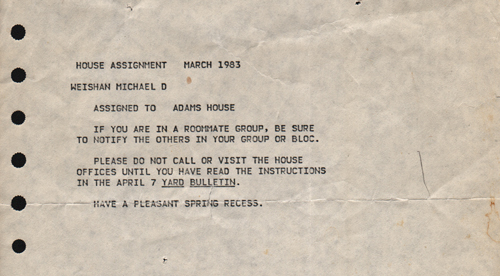 The beginnings of a grand adventure for a certain young freshman..

It was an odd experience.

For starters, as the term wanes, only the seniors remain, and it shows. In direct contrast to the previous September, when walking through the Yard with the newly minted, bright-eyed freshmen, now it’s remarkable to notice how much more adult, for lack of a better word, the students appear. Not that at 21 they look terribly old, especially compared to my increasingly creaky 46. But markedly gone is the youthful innocence, the exuberance, the awe of the underclassmen. A visible fatigue has set in. These folks have been there, done that, and now they’re merely waiting. Comfortably waiting, to be sure, like passengers in a first-class lounge, but none-the-less waiting, anxious to get going and board the flight of a lifetime.

Sitting in the dining hall, chatting with the students over lunch, I could sense a heightened mood – a mixture of happiness, fear, nervous excitement, relief, gratitude, and perhaps, perhaps, the first tinge of Harvard nostalgia. I tried to recall what I was feeling that last week: all I can remember is a vague sense of dread. My situation was different from many, of course. Having spent my junior year abroad, I came back to Adams the September of my senior year to find my College days almost over. Gone forever was the idyllic pace of sophomore year: now everything was rush-rush to that ominous question: what to do after. I wasn’t ready for after – I had just gotten back! Add to this my lack of desire to attend graduate school (probably a mistake in hindsight) and very little idea of what I wanted to do the rest of my life, and you can easily imagine that for me, the first week of June came as a jarring shove out the door. I still remember an Adams House tee-shirt from the early 80s. It pictured Adams students, diploma clad, madly rushing from the Yard under the placid banner Veritas, directly towards a cliff. Too late, they realize their fate, and tumble off, splashing into the ocean below. In the water sharks circle, swimming round and round a bloody-red Realitas.

In retrospect, things didn’t turn out badly. Far from it: I’ve had a hugely gratifying run (good health, great friends, a satifying career, and perhaps most proudly of all, seeing my name on an author’s card in the Widener catalogue – just in time to watch the whole catalogue disappear!) And, Deo volente, I still have a bit to go. But life certainly didn’t roll out anything like I expected – certainly nothing like the future I tried to envision sitting in this same dining hall twenty-five years ago. I longed to tell my mealtime companions not to fret: instead, to sit back, and enjoy the ride, for whatever will be, will be – or at least, it will be what you make of it. But I largely kept my own counsel: I knew precisely what I would have thought of this platitudinous advice a quarter century ago. Instead, I listened to plans, and hopes, and fears, nodding sagely (hopefully), and smiling at appropriate junctures (hopefully) trying to impart encouragement and enthusiasm. How could I be so sure it would all work out, one senior finally asked me. “Ah well,” I replied automatically, without a moment’s hesitation: “remember, we don’t hold graduations at Harvard, we hold Commencements.”

A pregnant pause, and mutual realization dawns: that in this ever so subtle distinction, barely appreciated by me two and half decades ago, rests the collective confidence of almost four centuries.

For us mere mortals, it doesn’t get much more certain than that.