On May 27, 2017, members of the Adams House class of ‘92 returned to celebrate their twenty-fifth reunion. Not content to mark the occasion with their classmates at solely the various events held by the College, the Adamsians organized their own activities in Adams House and elsewhere. The plan was initiated over dinner in New York by Jenny Davidson, Linda Rattner, and Tanya Selvaratnam, who then reached out to their classmates via Facebook. The result was a series of special celebrations by a special class.

The Adams House class of ‘92 stands out in many ways. It was the last class to enter Adams under the “ordered choice” House assignment lottery in which freshmen listed three Houses in order of preference and were assigned in a way that maximized the number of students who received their first choice—and sent many of those who didn’t to the Quad. Adams was thus the first choice of almost all of the students in its class of ‘92 when they entered the House as sophomores in the fall of 1989. The following year, Harvard assigned freshmen to Houses on the basis of “non-ordered choice.” That system, which had each rising sophomore list four Houses without indicating an order of preference and then randomly assigned the student to one of the choices, began the slide down the slippery slope to completely random assignment, which was implemented in the spring of 1996.

The Adamsians of ‘92 also were the last class to have the opportunity to swim in the legendary Adams House pool before it closed forever in 1990. They could enjoy the watery monument to luxurious decadence during their sophomore year. By all accounts, members of the class of ‘92 were especially active in the pool. They organized the “Bungle in the Jungle” party that culminated in the “party to end all pool parties.” Reportedly, the class of ’92 was particularly well represented among the dozens of nude swimmers encountered by Senior Tutor Janet Viggiani at that event in the wee hours of March 18, 1990. (For more on these events and the Adams pool more generally)

The class of ‘92 left a lasting legacy at Adams. The two Foo Dogs (actually Chinese guardian lions) that continue to adorn the Dining Hall arrived at Adams thanks to Thomas Lauderdale ‘92. Thomas, representing the House Committee, saw the Foo Dogs in a long-since-closed Newbury Street shop known as Gargoyles, Grotesques, and Chimera and instantly decided that buying the Foo Dogs would be the best possible use of House Committee funds. 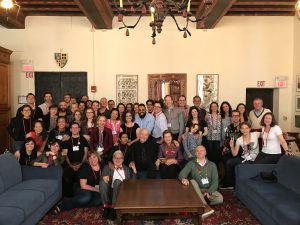 The Class of 92 in the Lower Common Room

The returning Adamsians assembled this year in the Lower Common Room in the early afternoon of May 27 for a “choco-holiday” reception featuring Burdick’s chocolate provided by Jenny Davidson. Beloved former Adams Masters Robert and Jana Kiely were honored guests, much to the delight of the alumni. Tanya Selvaratnam recalled the impact of the Kielys on the class of ‘92: “We were the misfits who did good, in part because the Kielys encouraged us to take risks and be as creative as we could be.”

Master Robert Kiely welcomed the class of ‘92 and took the opportunity to tell them about the five “rules” he had learned while spending twenty-six years with Adamsians.

Rule Number One: “Never ask for permission unless you absolutely have to.”

Master Kiely recounted the example of how students came to him with a plan to paint the tunnels that connect the various buildings of Adams House. He loved the idea, but knew that it would violate the Harvard rule that common spaces could not be decorated without the approval of a dean. Kiely thus decided the best approach would be not to ask for permission. Students painted during a January weekend when the House superintendent was away. The painted tunnels were thus a fait accompli, and even the superintendent learned to like the paintings. 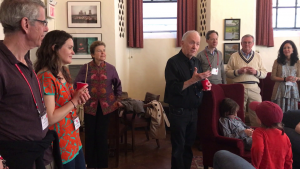 Rule Number Two: “Don’t worry about going over budget if you know the boss can pay.”

Master Kiely’s prime example of this rule in practice was the Adams House meal pool, the fund that the College provided for members of the Senior Common Room and guests to eat in the Dining Hall. Kiely never hesitated to add to the list of people entitled to free food, despite the complaints from Harvard’s administrators. (Your reporter learned to follow this rule, too, by submitting receipts to get reimbursed for lavish entry parties that featured champagne and caviar, among other things.)

Rule Number Three: “Don’t ever turn down an invitation to preside at a wedding.”

With pride, Kiely recalled how he had been invited to conduct a commitment ceremony for two women at the Hasty Pudding.

Rule Number Four: “Don’t think you own the place.”

Master Kiely related the story of how while he and Jana were living in Apthorp House, some Apthorps from Ohio came to look for East Apthorp’s original belongings in the house.

Rule Number Five: “Don’t leave the party until you’re sure it’s over.” 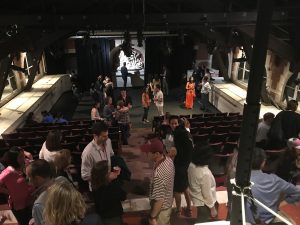 The class of ’92 explores the Pool Theater

Appropriately enough, given that he was speaking to the last class to enter Adams under the ordered-choice lottery system, Master Kiely cited the example of how he waged a long, albeit ultimately unsuccessful battle against randomization before stepping down as Master.

The returning Adamsians found signs of continuity and change in the House. Several were pleasantly surprised to see that their paintings on the walls of the Adams tunnels were still there. They saw much evidence of change when they visited the former pool and the Franklin Delano Roosevelt Suite in B-entry, both of which were open for tours during the mini-reunion.

As the class of ‘92 walked into the Adams House Pool Theatre and looked around at the transformed space, a few murmured “If walls could talk…” and the rest thought it. Memories of late-night swims came flooding back. A few alums lamented the closing of the pool and wondered if there was any chance that the notorious natatorium would reopen, perhaps as part of the House Renewal project. (The latest word is that the chances are slim.) 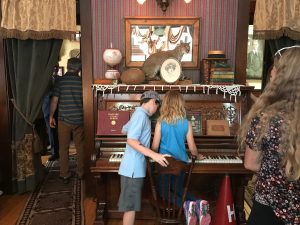 After visiting the pool, most of the group stayed in B-entry to tour the FDR Suite, which enticed visitors with the strains of music emanating from its player piano. During the years the class of ‘92 spent in Adams, the FDR Suite had been the office of Robert Coles, and few students had seen it. Many were only vaguely aware that Roosevelt had lived in Westmorly. Jaws dropped as the members of the class of ‘92 crowded into the lovingly restored quarters where Roosevelt had lived for four years.

Later on the night of May 27, the unofficial Adams reunion activities culminated with a midnight opera and sing-along in the Lower Common Room with China Forbes and Thomas Lauderdale, who are principal members of the band Pink Martini. The event was very much in the spirit of the Adams House that ‘92 Adamsians remembered. “It was a little surreal,” declared P.J. Karafiol.

After the events of the day were over and the Adamsian alums had left Cambridge, Tanya Selvaratnam took satisfaction in what she had helped organize: “I feel reborn after the reunion, especially because of the Adams mini-reunions.”