Harvard can be a strange and difficult place for a newcomer, freshman, professor, or poet.  I remember a new colleague telling me that although everyone was friendly and polite, he could not find the center of the place.  He always felt lost.  That was not Seamus.  Seamus had his own center.  He also had his own home at Harvard.  When he first came to the university in 1979, the English Department welcomed him warmly as Visiting Poet, but it was in 1981 when he moved into I-entry of Adams House that he became one of us, a neighbor, a friend, a member of the family.

The guest suite in I-entry was not a five-star accommodation. These rooms  were only a step up from the days of the founding Puritan Fathers.  There was indoor plumbing, electricity, a bed, a desk, a table, and a few chairs.  A visiting professor who had arrived near midnight some years earlier phoned me to say that the place had no door and she was afraid to go to bed.  Buildings and Grounds had been working on the room and had not quite finished the job.  I told her to pile furniture at the threshold and try to get some sleep.  We did install a door before Seamus arrived.  In any case, he never complained.  In fact, I think he liked the spare simplicity, the convenience, the company when he wanted it, and the solitude when he needed it.  When Marie came for visits, she put flowers on the table and said it made them feel like newlyweds. 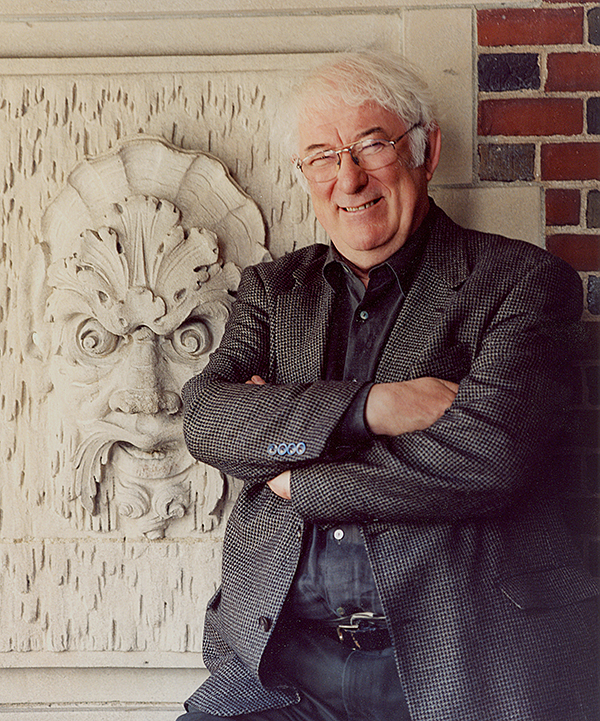 Seamus in front of the B-entry Fountain. Photo: courtesy Sean Palfrey Seamus came back every year for one semester.  It soon seemed as though he had always been there with us, taking meals in the dining hall, chatting with someone in Randolph Court, reading poetry and listening attentively and with evident pleasure to students reading their own poetry in the Common Rooms.  Like any true survivor at Harvard, Seamus learned how to disappear and do his work, but he also loved celebrations and a good party.  One of his favorite Adams occasions was the Saint Patrick’s Day Tea at Apthorp House.  He often brought Irish friends who could sing or play the penny whistle.  Students tried to dance something resembling an Irish jig.   He would stand on a chair and recite poems, beaming all the while, not for the attention he was getting but because of the attention poetry was getting.  When he was informed of the Nobel Prize, he was travelling in Greece.  He phoned to say he  couldn’t keep the astonishing news to himself.  It was during a Tea, so I announced it to the assembled crowd of students who cheered so lustily he could hear them in Athens.

Seamus was a great storyteller as well as a great poet.  Among the many he told, there are two stories about Ireland, poets, and poetry that keep coming back to me.  One night when he was driving alone through the Irish countryside after an event—a wedding or banquet—he was stopped by a patrolman for speeding.  The patrolman seemed tired, wet, and angry:  “Show me your driver’s license,” he shouted as if to a deaf man.  Seamus began fumbling around his pockets, realizing that he may have forgotten to carry it with him.  The patrolman shone a flashlight into the car as if looking for contraband.  “Can you identify yourself?”  Seamus noticed an envelope with his name and address on the empty seat next to him.  “Will this do?”  The patrolman shone his light on the name, looked up and said, “The poet?”  Seamus nodded modestly.  “Drive on,” said the patrolman.

The other story is about a poet looking for a poet who was not an Irishman.  Seamus loved the poetry of Gerard Manley Hopkins.  He knew that Hopkins had been sick, lonely, and unhappy in Dublin; that he died there; and, though an Englishman,  he was buried in Glasnevin Cemetary where Irish patriots had also been laid to rest.  One day, Seamus decided that he wanted to visit Hopkins’ grave.  In an almost Shakespearian scene, the young Irish poet got lost among the tombstones, unable to find his way to Hopkins until he came upon two gravediggers.  “I’m looking for Gerard Manley Hopkins,” he said.  “Who?”  “The poet.  Hopkins.”  The first gravedigger shrugged and looked at his mate, “Have you heard of a Hopkins?”  The second gravedigger scratched his chin, looked at Seamus, and said, “Oh, you mean the convert!”  And then glanced over his shoulder and said with a nod, “He’s over there.”

I hardly need to say that Seamus loved Ireland.  But like those ancient Irish monks who sailed off in their currachs  and made themselves at home all over the world, Seamus was a hardy traveller and, through his poetry and generous disposition,  his was a welcome presence and voice in many parts.

I have saved till last my most treasured memory and a copy of a message from Seamus to Harvard—to all of us—that most of you will not have read or heard.  In the spring of 1982 Adams House celebrated the 50th anniversary of its founding.  Throughout the semester there were festivities—an original opera, an art show, poetry readings, concerts, and finally a banquet.  Seamus, of course, was there.  As a surprise, he composed a poem and dedicated it to Adams House.  I now hear it as a toast to Harvard, a thank you note to all of us, and a light-hearted, but serious reminder of what we can be at our best, why he liked being here and, though he doesn’t put it that way, why we loved having him with us.

“For Bob and Jana with much gratitude,” Seamus

Ye maids and swains of Adams House,
Ye actors, athletes, sexy muses,
Ye gilded youth-
I rise to rise to the occasion
And not disgrace my art or nation
With verse that sings the old equation
Of beauty and truth.

I rise as one who comes and goes
Beneath your storied walls and windows
A visitor,
Part tourist and part faculty,
An ethnic curiosity
Dubbed by grace of poetry
Guest lecturer.

Inspire me then, occasional muse,
With verse to cure the exam blues
And banish care,
To greet old academic ghosts
Who once caroused on the gold coast
Whose love of learning vied with lusts
For flesh and beer.

That I may briefly celebrate
Community, half-collegiate
And half-domestic,
And say a word about the way
A scholar’s personality
Can keep its health emotionally
Yet stay scholastic.

The diapers we first were dressed in,
Our graduation gowns of ermine,
Which, would you say,
Will mean more to us in the end?
Those powdered folds pinned tight around
Our little backsides, or that grand
Scholar’s regalia.

All of us are amphibious
Between our universities
And where we come from.
No one gets born in a campus bed.
Even the trendiest school of Ed.
Has never weaned or bathed or breast-fed
Or wiped a bum.

No co-ed dorm supplies the joys
Of an attic full of dusty toys
And old dolls’ houses.
No faculty of engineering
Repeats the thrill of tinkering
With model planes, that hankering
To fly with aces.

It seems illiterate solitude
Is the first place that the true and good
Awaken in us.
The later freedom we call leisure
Cannot supply that buried treasure
Which is the basis and the measure
Of personalities

And which we name imagination,
A word I cite with much elation
And some unease
Because it can sound slight and airy,
An entry in the dictionary,
A bubble word.  Yet while I’m wary
I realize

All need its salutary power.
All men and women must beware
Who would deny it
And go against their childhood’s grain
And dry up like earth parched for rain.
They’ll grow mechanical and then
No drug or diet,

No health farm, clinic, yoga course,
No mantra, om, no Star Wars force
Will compensate
For what is lost when the mind divides.
Even science now concedes
The brain has two conjugal sides,
The left and right,

That have to marry intuition
To the analytic reason
For psychic balance.
Head sleeps with heart, begets a creature
Free yet cornered in its nature.
To be your whole self you must mate your
Brains and glands.

Which is why I bless the atmosphere
Of Adams House; and toast our master
And his wife.
I toast good nature in the staff,
The way that nothing’s done by half-
Those who work hard and still can laugh
Are the spice of life.

I like your hospitality,
Your literate vitality,
Your casual styles.
The way that love of liberal arts
And loves inspired by Cupid’s darts
Have educated all your hearts
Is in your smiles.

So all together, gaudeamus,
Because as sure as my name is Seamus
To-day’s the day
For intellectuals to play.
On your fiftieth anniversary
Rejoice, and as the jazzmen say,
Take it away.

(We are delighted and honored that this ode to Adams House by Nobel Laureate Seamus Heaney appears here for the first time in print, with our thanks to Bob Kiely for rediscovering this forgetten gem. –Eds)