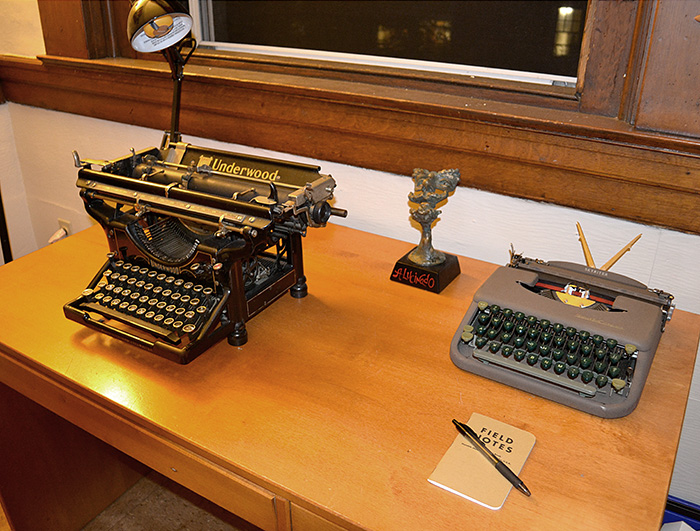 The immaculate Claverly desk of Santiago Pardo ’16. The Adams House Underwood is to the left; the referenced Skyriter to the right

GC: I understand you’re in possession of a certain historical typewriter, part of an obscure Adams House tradition. Please explain.

SP: Well I had just moved into the House and my sophomore advisor, Tim Smith, emailed me saying that he had something special to show me. I meet him in the House library and there on the table was an Underwood No. 3. He told me that a recently graduated senior [Antone Martinho ’13, past GC contributer –Eds.] had given the machine to him to pass on to a new sophomore. According to the senior, the typewriter had been passed down since the House’s founding. There is no documentation so the story is probably apocryphal, but thanks to the serial number, I was able to find out that the typewriter was produced in 1924!

GC: Still, regardless of the myth’s veracity, this particular typewriter has found a good home. We’re told you are quite a collector of antique typewriters, are you not? What’s their appeal? 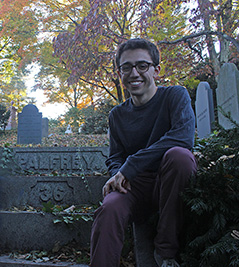 Santiago Pardo ’16
at the family plot of
Co-Master Sean Palfrey in Mt. Auburn Cemetery –
the resting place five generations of Palfreys
(the sixth is in the Old Burial Yard)
and
one of the many stops on this year’s
Adams House Sophomore Challenge.

SP: Typewriters are not standardized across models and that’s beautiful to me. Each model had a different function and it’s reflected in the machine. For example, up in my room in Claverly, I have a Smith-Corona Skyriter. It’s a perfect example of how the demands of post-war America led to new typewriters. Airline travel was becoming more common and young businessmen (or their assistants) couldn’t be flying around with those gargantuan typewriters used back in the office; so in comes Smith-Corona with the Skyriter—a sleek modern typewriter that fits perfectly under the airplane seat.

GC: But yours is more than just an attraction of function or form, is it not? You’ve refered to your “harem.”

SP: Back in high school, I had to write a blues song for a class. I ended up writing a rather salacious tune in which my typewriters were my various mistresses—each with her own needs and personality. One line went something to the effect of “you love it when my hands grab your…brass!” I’ve kept the mistress motif alive because I unfortunately cannot pledge myself to monogamy, at least when it comes to typewriters. I prefer to travel in search of new concubines for the typewriter harem that has become my room.

GC: Young man, We’re thinking you should consider yourself very lucky that parietal rules are no longer in effect. Just how many “ladies” have you stashed up in Claverly?

SP: Only two (soon to be three) at Adams, but eight more in my bedroom back home. A relatively small harem, as harems go.

GC: Somehow, Santiago, you strike us as not-your-average Adams House sophomore. Well, let’s rephrase: “even more unusual than your average Adams sophomore.” Tell us a bit about your background.

SP: I was born in Colombia but I’ve grown up in the suburbs of Atlanta. My parents have always been of the belief that traveling is a critical part of education so I have been fortunate to have been able to travel to many countries. It’s on these trips that I have acquired many of my typewriters. I bought my first typewriter in a small village in the south of France and since then I make it a point to always come home with a typewriter much to the annoyance of the TSA and customs agents.

GC: You’re something of a passionate historian, and a bit of a political activist as well. Tell us about it.

SP: I am a slave to passions but the one that captivates me the most is history. Here at Harvard, I am concentrating in History and the professors that I have been exposed to have shown me that history is a beautiful art that must be shared with the world. I have many muses in my life, but the one I find myself invoking the most is Clio. If it were up to me to set the curriculum (Mr. Obama, please don’t hesitate to call), I would make comprehensive historical study a core tenet. As for politics, I am on the board of the Harvard College Democrats and am an unabashed liberal. The existential question that keeps me up at night is whether I would rather have a walk on the beach at sunset with Bill or Hillary. The Harvard Dems have had great successes in helping to elect strong progressives and I have made some of my closest friends in the Dems.

GC: Your call for the next election? The match-up?

GC: We’re placing our bets on Hillary and Chris Christie, but we’ve been known to be wrong before. Still, can’t imagine Jeb Bush. Care to place a small wager? 5 bucks?