A number of our readers have been curious as to how we’ve found all the framed art that hangs on our walls. Well, let me tell you –  it’s been quite a process. First of all, we’ve been extremely lucky: discovering Lathrop’s descendants and their generous sharing of the Brown family archives; acquiring rare finds from the internet such as the Hertzog scrapbook I wrote about last week; benefiting from wonderful scholarship and support from the FDR Presidential Library and Museum in Hyde Park. But even with all this, sometimes it’s not enough to fulfill our mission. You see, unlike a house museum where the present is held in stasis, our goal is to create a living environment that actually transports you to 1904. If all the materials look old and faded, the illusion is compromised. Think about it: In 1904, everything would be new, or newish; colors bright, fabrics fresh, pages crisp. Which is why, for instance, we had craftsman Lary Shaffer create two “new-old” Morris chairs, and why we’ve sent “FDR’s desk” out for a complete renovation. Unlike the folks on the Antiques Roadshow, we don’t want too much patina of age.

This is especially true of paper goods. Take for instance this fascinating piece which came as part of the EBay find last week: 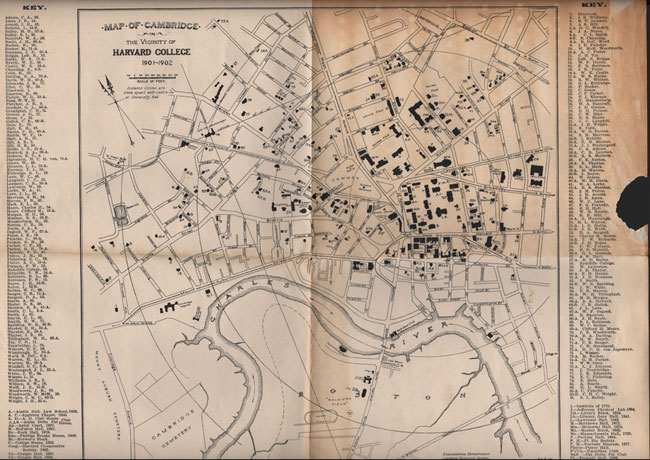 Now while it doesn’t look like much in its current state, this is really something special. It’s a 13″ x 19″ map of Harvard, drawn by the Harvard School of Engineering, centered on University Hall, and showing the extent of the College in 1901-1902, FDR’s sophomore year. Not only does the key list principle buildings of the University along with dates of construction, but it also shows the addresses of most of the principal professors at the College. (Can you imagine that in this day and age!) Unfortunately for us, the condition is pretty bleak: besides having a huge bite out of the right hand margin, the map had been folded and left in a very acidic scrapbook for almost a century – you can see the acid marks clearly. Now as an antique, this piece could conceivably be mounted and hung in the Suite, and we could call it a day. But its very condition reminds us all too readily that 110 years have passed. It’s 2010, not 1904, looking at this map. How much better would be a fresh copy, say, like this… 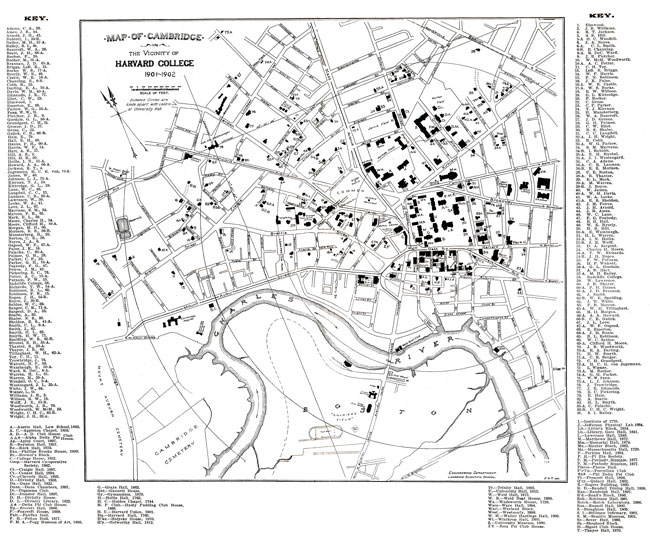 And in fact, we now have just that, ready for framing. This minor miracle is achieved using a program called Photoshop, which allows an operator to manipulate digital images. The process goes like this: the original document is first scanned into the computer, and then, in a series of steps, the effects of aging are removed one by one. This is possible because the computer sees the image not as a picture, but as millions of tiny dots called pixels, each with an assigned range of characteristics. I can ask the computer to group and isolate these pixels in a variety of ways – taking say, all the pixels of a certain color tone (such as faded tan) and changing them to white. I can have the computer sharpen lines by telling it to group all pixels within a certain color range more tightly and eliminate outliers. I can also remove or reinforce any element, eliminating a tear here, or darkening a capital there. (In actual period photographs, the process is much more dynamic and difficult, but the result is the same. We can often return a damaged century-old photo to brand-new condition.) The correction process is very much trial and error, and relies entirely on the skill level of the operator. Fortunately, after ten years in the media biz, I’ve gotten to be an old hand at such digital manipulation. (Need to lose 10 pounds and those wrinkles on your published photo, give me a buzz! lol) Still, it takes a tremendous amount of time. The map above required a good three hours to fix, but I think you’ll agree the result is fairly spectacular. Below’s a larger version. Just click on it to maximize your view. (It’s a very large file, so depending on your download speed, it may take a bit of time. Then, once you see the map appear, you may enlarge the image further through your browser and poke around the Cambridge of 1901.) 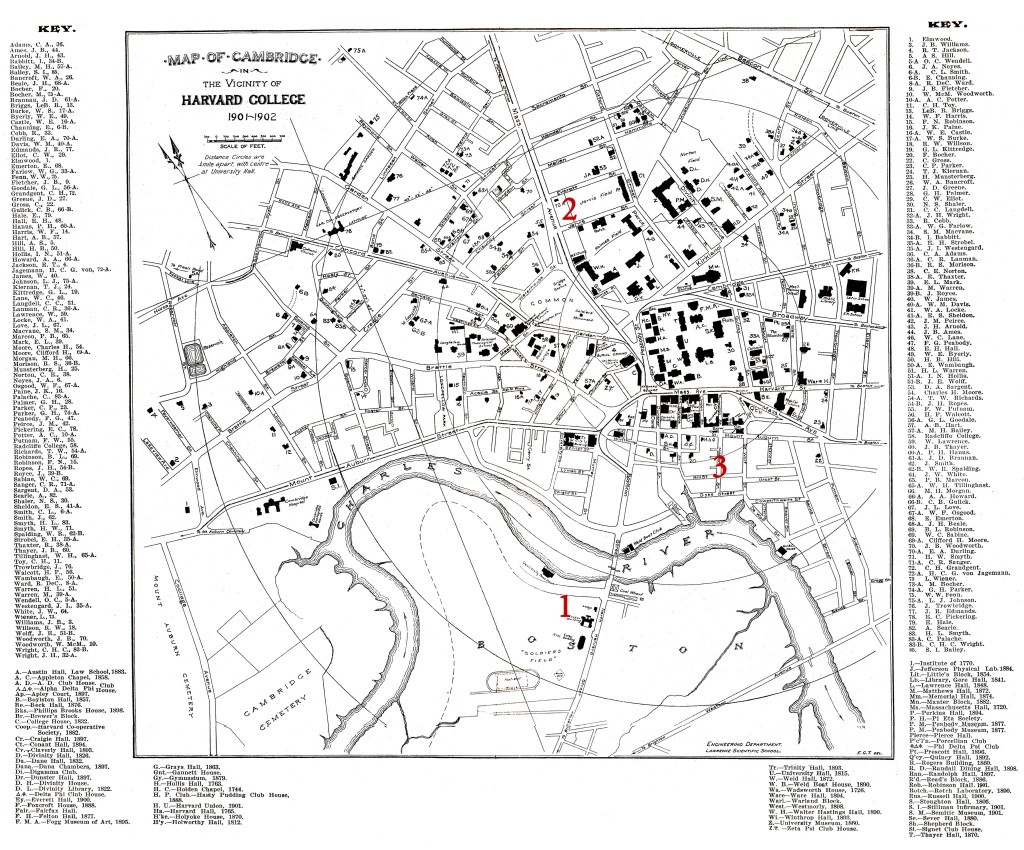 Just for fun, I’ve added three red numerals to this version of map, to point out to you how valuable pieces like this are to understanding FDR’s Harvard. At 1, you’ll see Soldiers’ Field as FDR first knew it, with wooden football bleachers and no Harvard Stadium. No Biz school either; that’s another 25 years off. 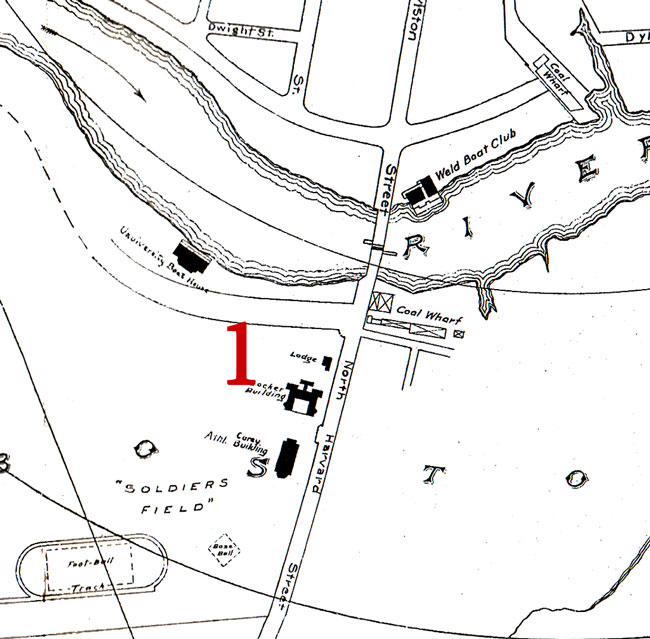 In FDR’s time, athletics were still grouped north of the yard, near numeral 2, which explains the odd location of the College’s Hemenway Gymnasium. (It’s also where the first football game was played, from my previous post.) This area was rapidly becoming built up though, and soon (1903) the Stadium would rise and athletics would move permanently across the River. 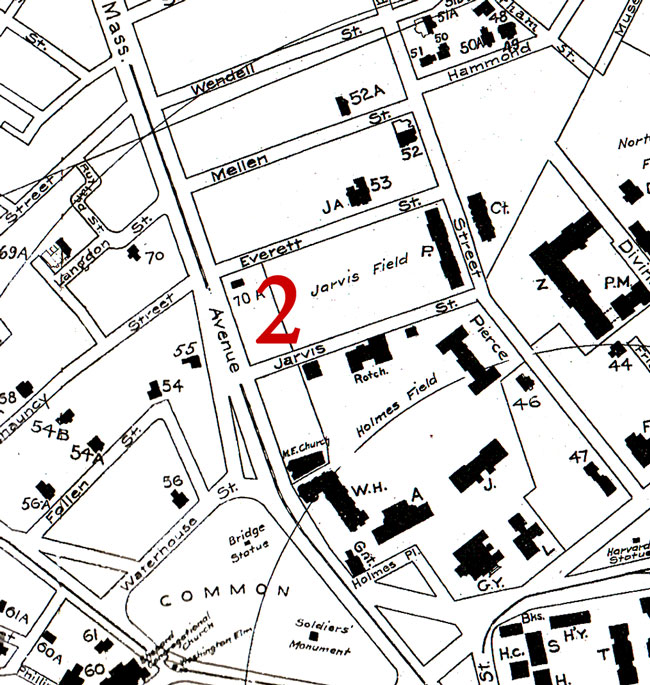 And finally, take a look at 3, the area south of Mt. Auburn: 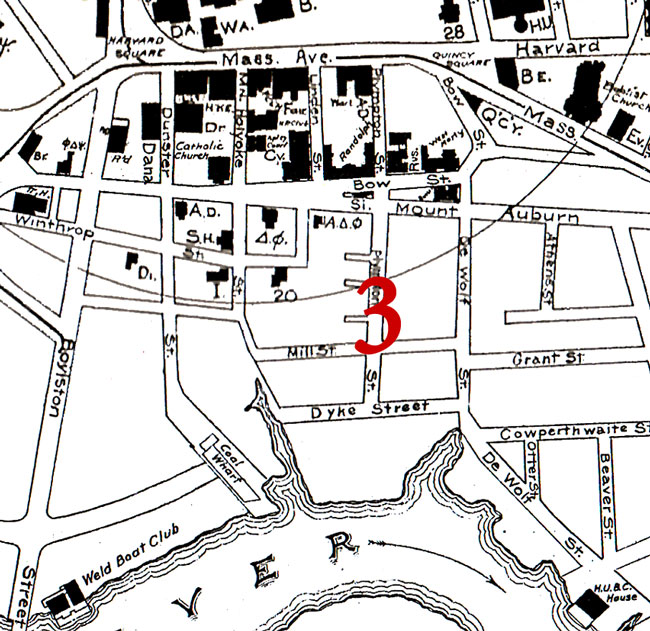 Notice how the Charles still has watery fingers pushing towards the Square (remnants of now long-contained streams running from the north) and how the area along the still-tidal banks is almost industrial. (You can clearly see the College coal wharf.) No Memorial Drive for another few years, and no Harvard Houses either. Where Eliot sits there is a coal-tar plant, Leverett and Winthrop are swamps, and Mather’s site is occupied by a long-vanished boat house. And see the grouping of buildings along Mt. Auburn, including  our beloved Westmorly (or half of it, with A-Entry yet to be built), and how there’s almost nothing to the south worth mentioning? At last, the term “Gold Coast” begins to have some meaning… Oh, and how about that! Something I never noticed before: a Catholic church on Mt. Auburn, too, just west of Claverly where Holyoke Center now stands. Perhaps the predecessor to the later St. Paul’s we now know so well?

All in all a very different Harvard, this, and one we’re able to restore – one pixel at a time – thanks to support from people like you.

The FDR Suite Restoration Project at Adams House, Harvard College is funded entirely through your contributions to the FDR Suite Foundation Inc, a public 501(c)3 charity set up to create a  living memorial to FDR at Harvard, as well as a museum of 19th century Harvard student life. We do not receive funds from the University to support this endeavor, and rely on your help to continue our efforts!